"Hey, I know you're busy,
but can you please go grab the camera?"

It was tough to remember to stop and take pictures at the ranchos. It seemed like our ministry required every bit of our attention from the minute we arrived to the time we left hours later.

Often times, when we did remember to take a photo, the lighting was poor, the lens was dirty from the dust in the desert or somebody bumped the camera. We chose the best pictures we had for the newsletter, but we wanted to share some of the others - despite their poor quality.

As a group, we led a powerful night of prayer at this particular rancho - praise be to God!!

Several missionaries, including Karen, gave testimonies of their own faith journeys.

Joseph Summers, the director of FMC, gave a captivating talk on the Feast of Christ the King.  It was inspiring to see how well he connected with them and related the gospel to their lives.  They were laughing, crying and praising the Lord together in a way that we hope to duplicate some day.

Joseph invited the locals to give testimonies.  A 14 year old came forward to share:

He recalled the missionaries that "came through"
periodically when "he was a kid".
He loved being invited to the chapel with his mom
to pray, learn about Jesus and sing songs about love.
When he was 12, his life hit rock bottom.
He was involved with a gang, had dropped out of school and
was addicted to drugs. He overdosed and ended up in the hospital.
His "friends" ran. His parents were furious. The neighbors were scared.
Laying in the hospital bed, he felt that
the only person that loved him was Jesus.
He wept as he recalled the joy he felt when
"the missionaries would come through".
More than anything, he desired that joy once again.
When he got out of the hospital he completely changed his life.
He spent his time reading the Bible instead of hanging out with his gang.
He craved the Eucharist instead of drugs.
He fell head over heels in love with Jesus
and wanted everyone else to love Him too.
Since then, this boy is committed to bringing others
into a personal relationship with Our Lord and Savior. 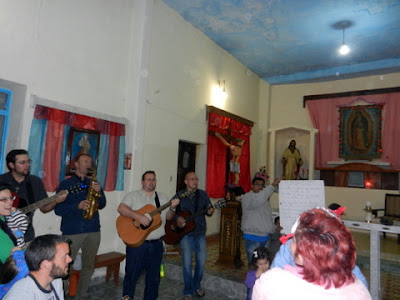 After the testimonies, Chris and several missionary brothers rocked the house with Spanish praise and worship songs. 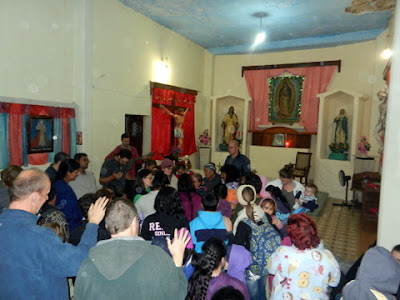 We ended the night by praying over anybody that asked for intersession.  The people were eager because of all the miracles they've witnessed.  In our training we learned about the strong faith of the poor.  They have nothing else, so they "have to" rely on God, who definitely rewards their faithfulness! 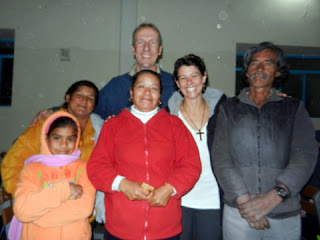 As people were leaving we passed out comfort crosses to any that hadn't received one. They were incredibly grateful!! 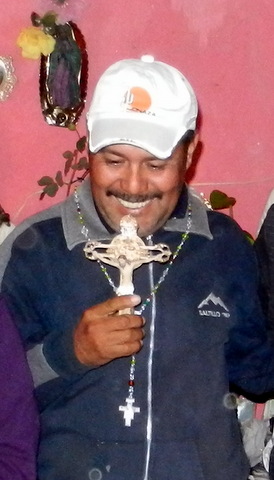 This picture captures one man's excitement in such a beautiful way.  We were able to give him a crucifix for his home AND a rosary- both of which he longed for but had never had.

Thanks again Team Carmody for all you're doing to bring the love of Christ to the nations!