“Will you bring your jump ropes to the plaza tonight?” the local kids begged.  We say “yes” as often as possible and this “yes” seemed pretty easy and straightforward....

Around 8pm we went to the town square with our bag of jump ropes.  The plaza was FULL of people.  Something was obviously going on. 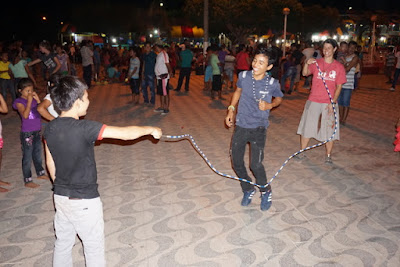 We quickly figured out that the transvestites were having a comedy show of sorts, which everyone had come out to watch.  Without skipping a beat, we diverted the kids' attention and found an open area.  We invited the local kids to jump and before long we had a crowd of about 60 people watching and participating.  Kids of all ages, young adults and even some of the older people (our age) joined in.  About an hour later one of the kids informed me that there weren't any kids watching the transvestite show anymore. Instead, they were had chosen to jump rope with us.