Our family is spending the month of April in Trujillo, Peru
where we're attending language school. 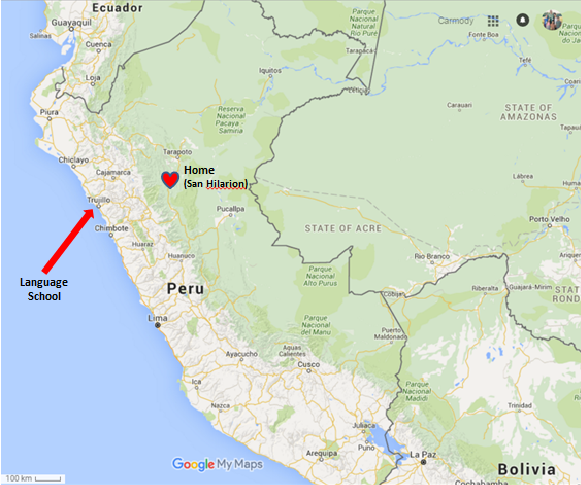 On the map it may seem close.  However, traveling between San Hilarion and Trujillo requires one to cross the Andes Mountains.  We weren't exactly sure what that entailed;
so, when we bought our bus tickets we asked Andrea, the ticket sales woman
(in Spanish of course)...

CHRIS: So, how long does it typically take to get to Trujillo on the bus?
ANDREA: About 15-18 hours unless there is a "derrumbe", then it takes longer.
CHRIS: What's a "derrumbe"?
ANDREA: (She gave an explanation that used a lot of words we didn't understand.  Thankfully, we were able to pick out a couple key phrases which included the words earth, fall, dirt and road.  We surmised that "derrumbe" means mudslide.)
CHRIS: Are mudslides common?
ANDREA: Sometimes
CHRIS: If there is a mudslide, how long does it typically take?
ANDREA: Sometimes the buses have to turn around and come back.  They never make it.
CHRIS: I hope there's not a mudslide.
ANDREA: Me too. 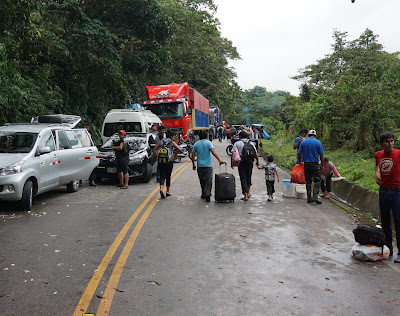 After about 10 hours of driving through the twisty, curvy, narrow mountain roads we felt like we were in the home stretch with only 7 hours left. Unexpectedly our bus came to a stop behind another bus that had stopped behind a mile long line of buses, semi-trucks, motorcycles and cars.  Something was wrong, but we had no idea what.  The bus sat idling for about 30 minutes before the driver finally turned off the engine.  Little did we know that the engine would remain off for the next 11 HOURS. 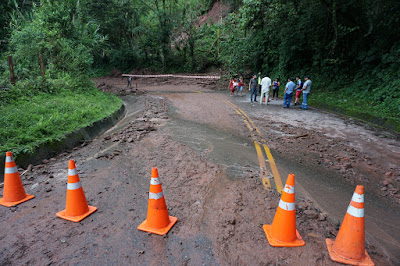 After waiting patiently in the bus for a couple hours we decided to get out and investigate.  We passed through the orange cones and continued walking for over a mile.  We didn't realize it at first, but we were learning about "derrumbes" first hand.  Andrea seemed to use all the right words.  The earth had in fact fallen and there was dirt all over the road.  More specifically, several sections of the mountain had broken away and tumbled downward. As the earth slides down it tears up everything in its path, creating an avalanche of sorts out of dirt, boulders, trees, etc..  About 1 mile of roadway was impassible. 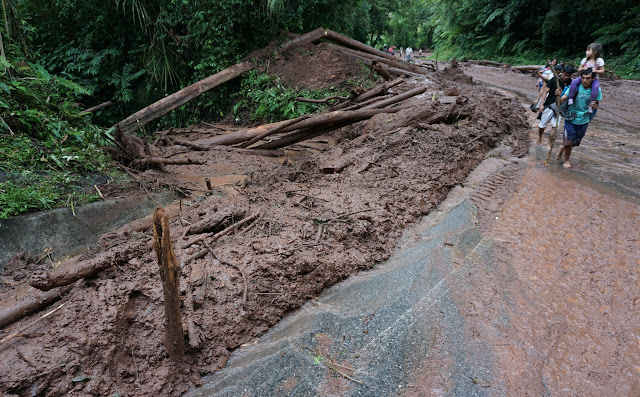 We waited...and waited...and waited while one front loader bulldozed the debris to the side.   A "derrumbe" is typically caused by extensive rainfall.  There had been so much rain that waterfall-like rivers cascaded down the mountainside in the freshly torn paths.  Water flooded the road so much that at one point we saw the front-loader halfway underwater trying to remove boulders and huge trees. We continued watching the clean-up effort until it started to rain.  We figured the last thing we needed was to be in soaking wet clothes for some unspecified amount of time.

After 11 hours the road was cleared enough to pass - at least that was their expert opinion.  We watched out of the windows of the bus as we waded through several feet of water and dodged large boulders and clumps of trees.  I'm not sure if the other folks on the bus were praying, but I think we said enough prayers for everyone.

We checked into our hostel and collapsed in bed. Who would have thought that sitting could be so exhausting?  The next day we ventured out into Trujillo to find our language school.  On Monday we started.

We'll write another blog post soon about language school and our time here in Trujillo.

Please pray for our ability to learn Spanish so that we can minister to those the Lord has called us to serve.