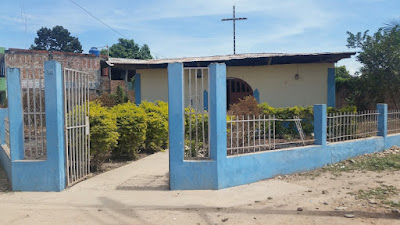 Where, oh where,
do we start?

Tuesday night one of our priests celebrated Mass at our church in San Hilarion.  Before dismissing the large crowd of people he announced that in one week he would return with the Blessed Sacrament.  The people didn't really understand what that meant, but seemed pleased.  They smiled and left.

Our family stood frozen...shock, excitement, anxiety...our minds reeled with thoughts.  This place isn't in any order to house the King of the Universe.  There is so much to do!!!
We ran home and made a To-Do list.

It was a busy week to say the VERY least.  Following are some photos that capture some of the work that was done to prepare for the arrival of the Blessed Sacrament the following Tuesday. 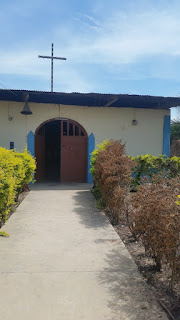 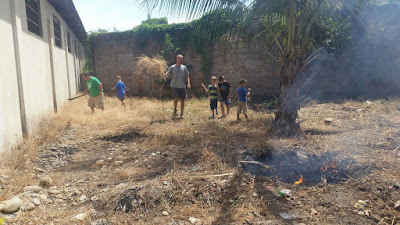 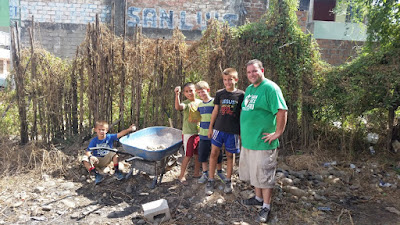 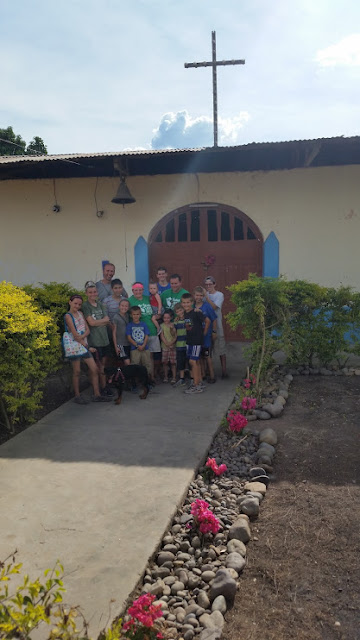 When we finally called it a day, everyone was super excited
because of how beautiful the yard looked.
We were also really excited to check something off our To-Do list. 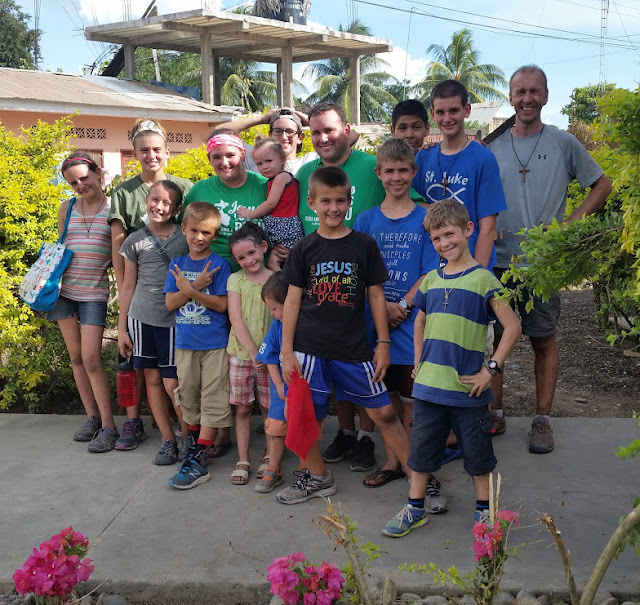 Next up - the tabernacle, sanctuary lamp and kneelers... 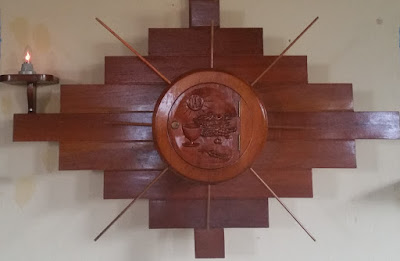 Edgardo, the carpenter, did an amazing job on the tabernacle.
He also made kneelers for us.
The tapestry man and his wife put on padding and covered them with leather. 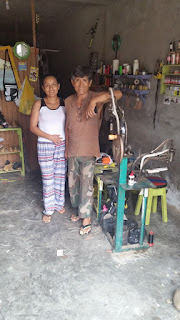 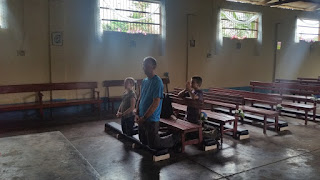 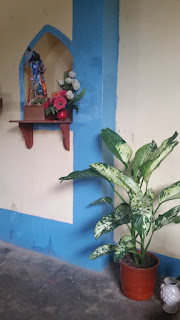 In Michigan it would be so easy - "Buy new pots and plants for the altar".  It was anything but easy.  We learned that people don't typically buy large pots; therefore, people don't typically sell large pots.  People enjoy the many Amazonian plants already growing around them and periodically transplant some into spaces around their homes.  We went on a wild-goose chase looking for the one woman in Tarapoto (the large city about 1.5 hours from our house) that sells such items.  We were almost ready to give up when we finally found her.  Thank you Jesus!! 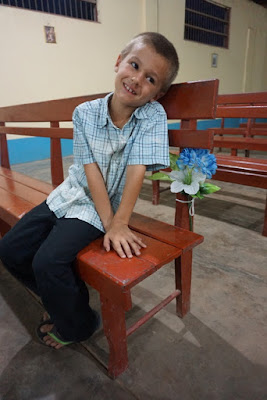 Chris and the kids traveled to a nearby town where they could buy fake flowers.  When they returned they rushed up to the church to attach them to the ends of the pews.  Little by little the church was being transformed.

Everything we had done was fantastic.
The people would definitely notice that something was different.
However, we felt it was important to make it clear exactly what was different.
So, we set about the task of hand-stitching a huge sign that announced "Jesus is Here!".
Our sign hangs in the entryway of the church.
When people walk in they now must walk to the right or left to enter the church.
It is a beautiful reminder that something is different now.  Jesus is here!!! 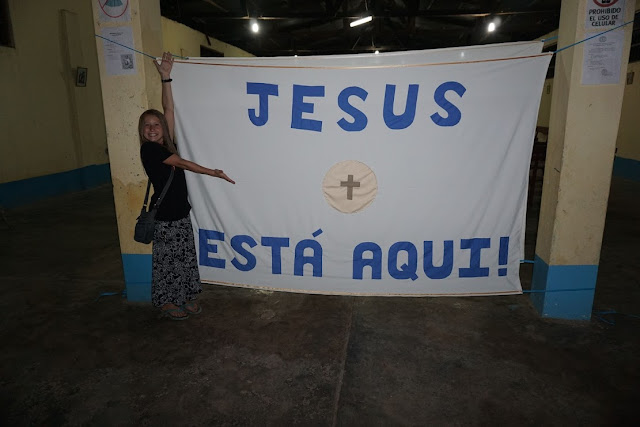 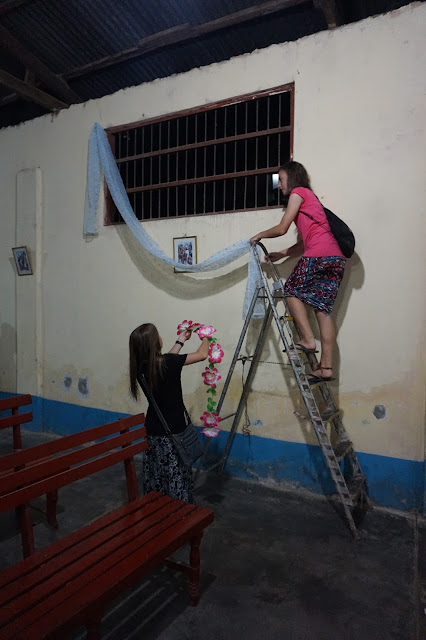 On Tuesday night, as people were arriving for Mass, Chris rushed in the door with the curtains which had just been finished by a woman in a neighboring pueblo.  Katelyn and Anna climbed up the ladder in their skirts and carefully draped them across the windows.  It was a perfect finishing touch!!
When Father arrived, he was delighted beyond words.  Our church was fit for the King of the Universe.  Everywhere he looked was evidence of our love... love for Jesus!

Moments after Mass began our whole town lost power.  Everything was black.  Accustomed to such power outages, everyone sat patiently in the dark as our friend lit candles and placed them around the altar.  My heart sank.  The sinful, proud part of me wanted everyone to see all the work we had done to make the church so pretty.

A scripture verse that I had recently underlined in my bible immediately came to mind: 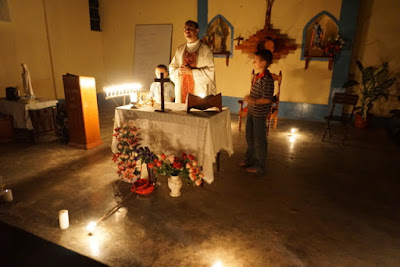 As I glanced up at the altar and saw Jack and Michael attentively serving, I remembered why we had worked so hard.  It wasn't so that people would thank us or think we're great missionaries. It was for Jesus, and I know that Jesus can see in the dark.

Sometimes it's hard to remember that "it's not about me".  I thank God for reminding me of that this night.   As the candles flickered, tears welled up in my eyes.  The church looked beautiful in the soft, gentle light.

Before the Liturgy of the Eucharist began, Father explained that after the consecration our church would truly be different; Jesus would be here with us.  He talked about the importance of showing respect and being reverent.  He also explained the importance of having people responsible for maintaining an environment suitable for Our King.  At that point he invited Chris and me up to the altar. He read official documents from the archbishop and inducted us as registered Ministers of the Eucharist.  In Peru, it is rare for lay people to be given this position.  Our priest has worked hard to obtain this privilege for ourselves and some of the other missionaries so that we can have the Blessed Sacrament available for the people in our pueblos. 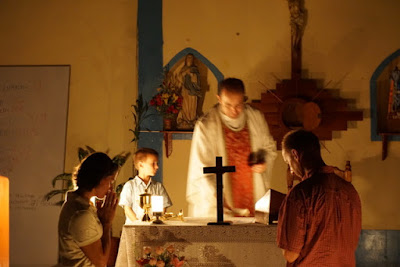 Each morning we open the church for prayer from 6-7 a.m.  The people that have come seem incredibly appreciative for this time with the Lord.


Please pray for us as we continue to work hard to serve the Lord by serving His people.

Posted by Carmody Family on Missions at 11:41 PM No comments:

How Many Missionaries Can Fit in a Suzuki Samurai?

We spent our day off in the mountains with our missionary friends, the Schmidts.  When it came time to leave, the Schmidts offered to drive us back to the city.  This would require multiple trips in their Suzuki Samurai.  [In case you're not familiar, the Suzuki Samurai is a small SUV designed to fit four (relatively) comfortably.]  Katelyn had a different idea.

See if you can count how many missionaries we fit into the Samurai...

Missionary life isn't always comfortable (literally), but it sure is fun!!!

Posted by Carmody Family on Missions at 9:10 PM No comments: 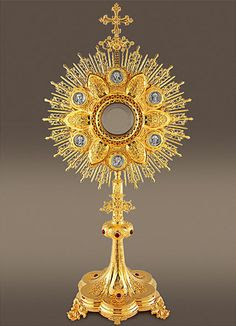 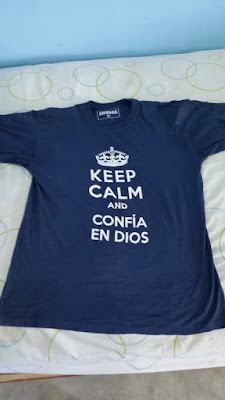 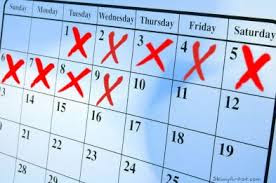 Posted by Carmody Family on Missions at 8:31 PM 5 comments: