"How do we teach people the story of Christmas?"

"How about a theatrical presentation of the
nativity story in the town plaza?"

And so the idea was born.  On Christmas Eve the youth group did a living nativity in the center of town.  A narrator read the story from the bible while the kids acted out each scene. It was amazing!!

All of the sudden, the Angel Gabriel appeared and asked her to be the mother of God.

After the angel departed, Mary went to Joseph.  In our version of the story, Mary and Joseph stood together contemplating the recent events as the narrator explained things in a bit more detail.

Then, Mary and Joseph began their journey to Bethlehem. 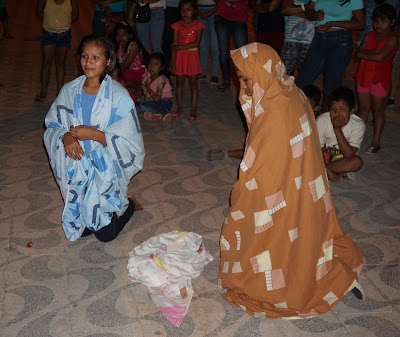 When they arrived, Mary took the crumpled up sheet out from underneath her shirt and gently laid it upon the ground to show that Jesus had been born.  It was simple and fun, but effective.  Everyone gathered was watching intently and enjoyed the simplicity of the presentation.

Off to the side, the Angel Gabriel visited the shepherds (and the sheep) in the field and announced the birth of Our Savior.

After Gabriel left them, the shepherds and their sheep made hast to meet Our Lord.

As the sheep crawled along the ground the shepherds poked and prodded them with their staffs, which was really silly.  As the people giggled and laughed, they moved in closer to hear and see better. 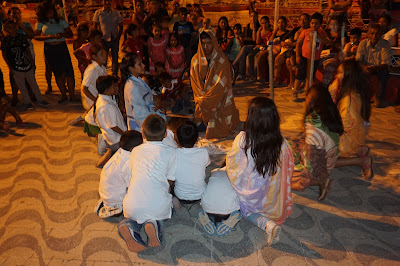 The narrator explained the shinning star and the hosts of angels.

Everyone listened and watched as the shepherd kids adored the Baby Jesus. After the sheep scurried away  the three kings began to make an entrance by weaving through the crowd. 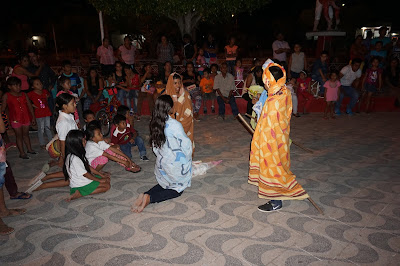 When the wise men arrived, they too fell to their knees in adoration.

As the narrator explained the need to "depart by a different way", the wise men rose and walked away.  Mary and Joseph stood together, holding Baby Jesus as everyone listened to what happened next.

I looked around and realized that all eyes were transfixed on the Holy Family as they fled Bethlehem toward Egypt.  When the narrator finished, the crowd erupted in applause.  They loved it!!! 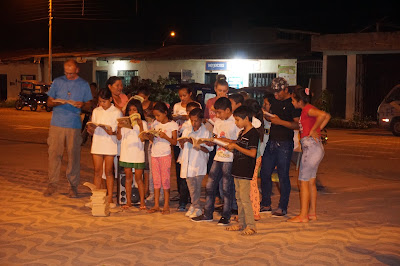 After the skit we were hoping that the community would sing Christmas carols altogether.

Our plans had to change when we realized that the people don't know Christmas carols. The kids gathered and sang to the audience, which was equally as delightful.

It worked, all praise be to God!!!

Hopefully, this presentation of the nativity becomes a new tradition in San Hilarion so that each year more and more people can learn the story of Jesus' birth.