When you hear,
"HOME SWEET HOME"
is this the image that comes to mind? 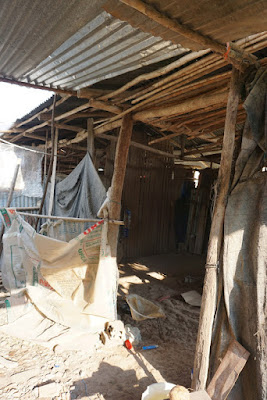 For Amelita, this was home...


When our friend introduced us, Amelita could hardly speak between sobs. Her grandson was threatening to take back the steel roof panels he bought her years before. She was deathly sick from living in such destitution and felt afraid. Without a roof over her head (literally) her humble home would be nothing more than bamboo shoots draped in plastic. 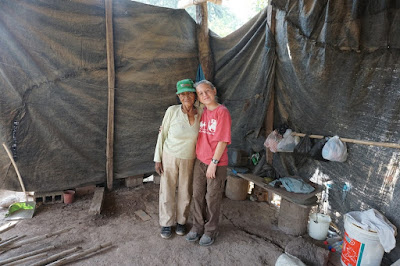 Amelita didn't ask for much, but the Holy Spirit told us to give her everything. Jesus was before us, in the disguise of a desperate elderly woman, and we wanted more than anything to serve him, to restore his dignity.


In obedience to that prompting we asked Amelita if we could build her some walls. In awe, she explained that she never had a "real" house before.  We took measurements, ordered the wood and got started. 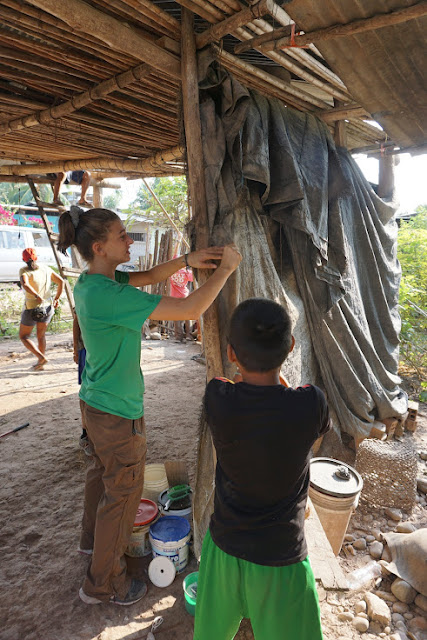 Gently the kids untied the countless knots and took down the walls. 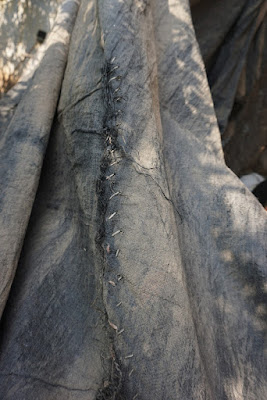 As I laid the large patchwork creations on the ground to fold them I realized just how much effort had gone into creating a place to call home.


Everyone pitched in to help... 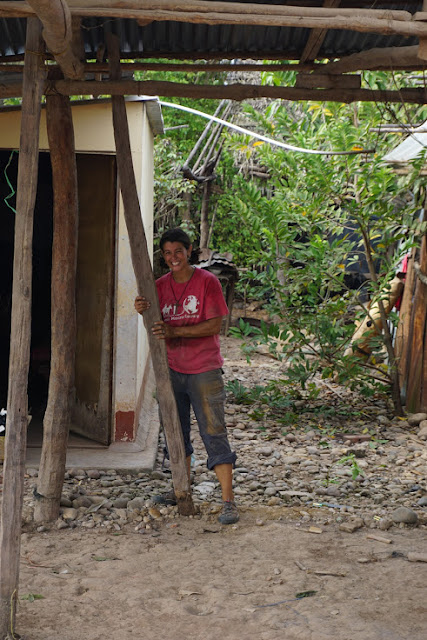 After taking down the plastic we carefully disassembled the bamboo shoot supports. Michael and our friend Isaac carried all the bamboo shoots to the backyard where they piled them neatly.  It went without saying that someone else would use these precious resources for something. 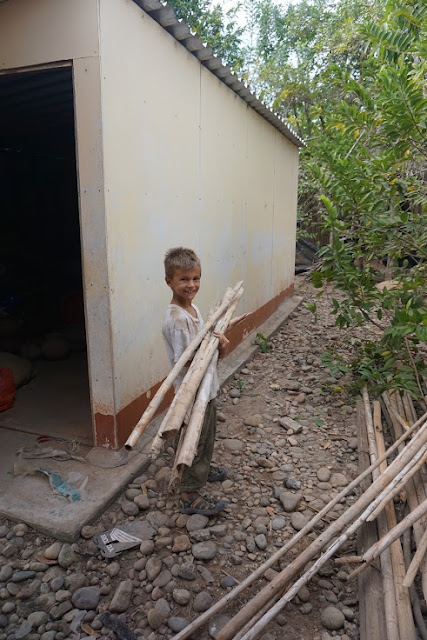 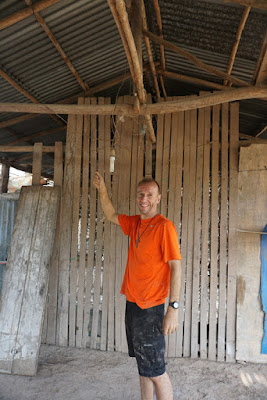 Chris came to the rescue when we happened upon a tangled mess of electrical wires ~ some old, some new, some functioning, most not.

They all appeared to be leading back to Amelita's grandson's house which we learned was another source of pain. When angry, which was most of the time, her grandson cut off the electricity to punish her.

We thanked God for Chris' apprenticeship with my dad during our many home improvement projects. He untangled the wires, politely returned them all to the grandson and thanked him for allowing his grandmother to use his electricity in the past. 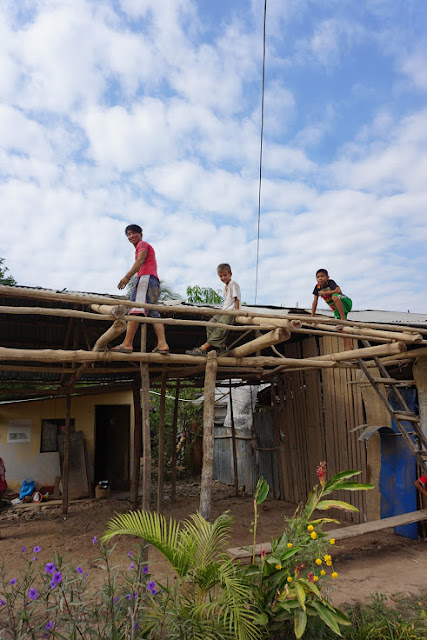 After all the walls were down it was time to take off the coveted steel roof panels. 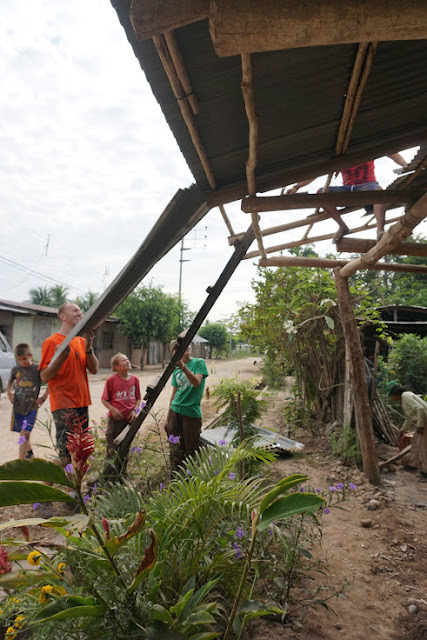 We carefully removed each one and carried them to the grandson's house. 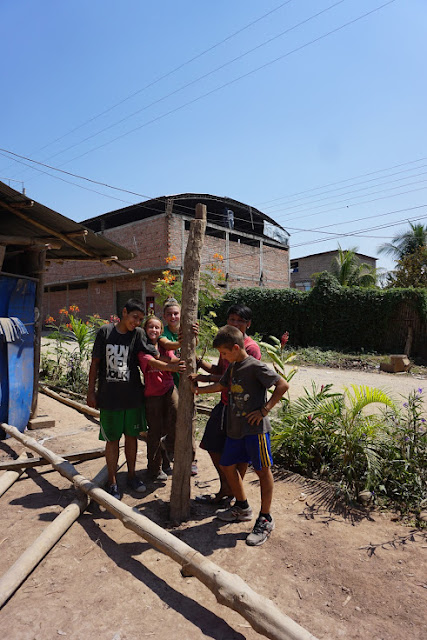 Throughout my life I've done many projects with my dad. As a job was coming to completion I'd always hear him say, "That's the one we've been looking for all day."

If we were chopping wood he'd make his joke as he was getting ready to swing the axe for the last time.  If we were raking leaves he'd share the cherished line as we dropped the last leaf into the bag.

The last task we had was pulling all the 3-meter tree trunks out of the ground so that they could be used again. The kids realized just how strong something becomes when you bury a third of it underground.

As we lifted it out of the hole I laughed and said, "This is the one we've been looking for all day." I'm not sure if the Peruvian kids understood my joke, but they realized the work was done when we invited them all to get an ice cream cone.

As we stumbled along the dirt road I thanked the Lord for my wonderful parents who unknowingly prepared me well for this life in missions. 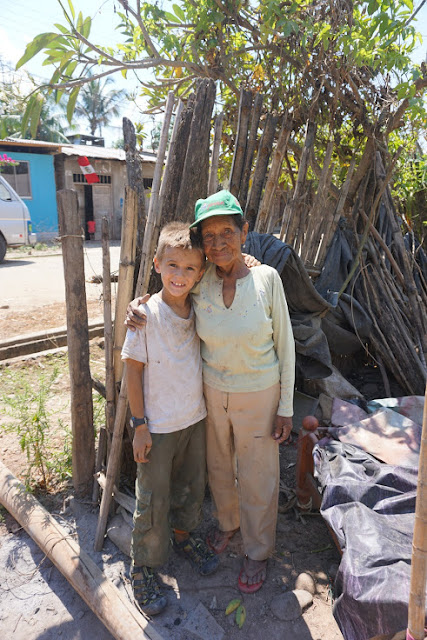 The question has been raised many times, "Why did you build Amelita a house and not others? How did you pick her?"


The easy answer that can be hard to understand is that we didn't pick Amelita, the Holy Spirit did.


During our formation with FMC we were told time and again that the Holy Spirit is the principle agent in missions. Our job is to simply listen and obey.


There is a praise and worship song that we sing with the following lyrics:
"Let us rise up, rise up. To say Amen is not enough, we must fly to ever corner of the earth, til every heart has felt His worth, Oh that tonight we would rise up.  Holy Spirit, fire fall - as we listen for your call.  Burn in us, you are our desire. Yearn in us. Set our hearts on fire." 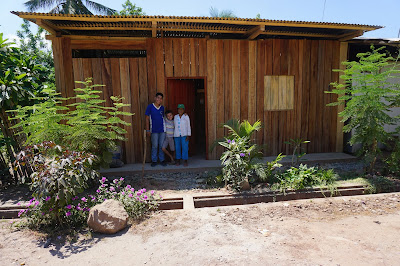 We see Amelita almost daily.  She walks differently than she used to: upright and with dignity.  She continues to struggle with a chronic cough, but otherwise her health problems have subsided. She spends most of her time in church, is often seen walking around town with other ladies her age laughing and making jokes.

When she sees us she always gives us a big hug and kiss. Skeptically one could assume it's because we provided so much for her materially, but we know in our hearts that it's because she has felt the love of Jesus...she has felt his worth, just like the praise and worship songs states.

I'm going to keep my eyes open for a sign in Spanish that says, "Home Sweet Home"that we can hang above her door.