Another Miracle - Thank You Jesus!!

Miracles Abound,
All Praise be to God!

When the bible study ended last night we headed to the van and summoned the kids to follow.  They hurried over only to say that we couldn't go home yet.  I expected petitions for more play time, requests for driving friends home or possibly just time to hang out in the plaza.  I was wrong.

A few hours earlier a man got into a moto accident and was writhing in pain. The unofficial diagnosis was a broken femur. He was unable to walk and wailed in pain with even the slightest touch. Due to his intoxicated state, he was prohibited from seeking help at the clinic until he was sober. Katelyn and Anna, who know everything about everyone in town, informed us that the injured man is the dad of the girl who played Mary in their nativity story skit on Christmas Eve.  "Remember," they said, "the girl who heard the story of Jesus' birth for the first time during our rehearsal?"  They sadly explained that "everyone" feels like Tido "deserves what he got cuz he's nothin' but a drunk".  Unphased by popular opinion, we continued on to his house. 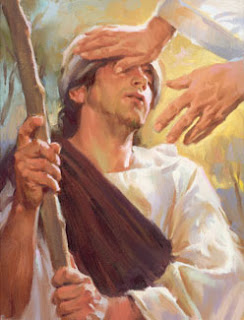 We found him laying in bed bearing the unbearable.  At first he was indifferent to our presence and neither objected nor consented to our company.  We eased into conversation and allowed him to take the lead. Within an hour Tido was sharing personal stories about his family and his faith. He raved about our daughters and explained how much the other teens respect them. He congratulated me on a recent soccer game well played and recapped some highlights. Before he could say more he was overcome by the shooting pains in his left thigh. As his back arched up, his head dug into the pillow, and his clenched fists crumpled the sheets, we knew it was time to pray. I took a hold of his hand and altogether we approached the throne of God, begging for healing of both body and soul. After the pain subsided I drew attention to the wound on his hand and asked for permission to treat it. He declined, insisting that it was nothing, but gave in after Chris explained the danger of infections. His wife showed us the gashes across the tops of his left toes, so we cleaned and wrapped those as well. As I carefully worked, Chris began quietly singing a popular praise and worship song. To our surprise, Tido began singing along. He knew every word...who would have thought? When Chris started singing a second song, Tido smiled and joined in.  Time seemed to stop as we offered our praise to the Lord.

With increased confidence and comfort, Tido began talking about his job ~ it's a good job that he's had for a long time.  However, if he didn't show up for work, they would find someone else. Providing for his family was incredibly important; so, broken femur or not, he was going to work the following day. I rushed home to get the VetWrap we brought with us from the States. As I began wrapping his thigh, Tido clenched his teeth and squirmed. Despite my efforts to be gentle, the pain was too much.  Seeing this, Chris insisted that he at least get an X-ray so we know what we're dealing with. He finally agreed to consider it in the morning.

Tido laid still in silence.  Assuming that he'd fallen asleep, we agreed to tip-toe out... Until he began describing his daughter's desire to be baptized in the church and receive Jesus in the Eucharist. Before, he was objectionable to anyone in his family even going to church, but his heart has soften. He asked if we would be willing to be her godparents. Without knowing what the Lord had in store, I would have considered this the miracle!!

Before leaving we laid hands on our new friend and begged the Lord for complete healing. After returning home we prayed again. This morning, before Chris left to check on him, we prayed again. In the bible, Jesus tells us to pray without ceasing, and so we do! Chris found Tido pain-free. His left thigh felt a bit weak, but was otherwise fine. He agreed to one day's rest and plans to return to work tomorrow.
AMAZING - AMAZING - AMAZING!!!

I wish I could share pictures with you, but there are none.  We didn't have our camera with us last night and it wouldn't have been appropriate to compromise the sanctity of this experience by taking a picture today.  Despite the lack of exciting photos, I wanted to share this story because it's a perfect example of what we see so often. I encourage you to pray with confidence and then wait. I'm here to say that...

miracles abound,
all praise be to God!