The Lost Sheep are Considering Baptism

We've read the parable of the lost sheep over and over, but have we considered the story from the perspective of the sheep?  Have we thought about how it feels to be the one who is lost and alone, scared and filled with doubt?


Jesus knows how the Lost Sheep feel because they too are His precious children. When we're lost we get confused and sometimes panic; unable to think rationally, we struggle to make good decisions. Jesus sees his Lost Sheep wondering aimlessly in desperation and weeps for them.  Knowing that they will follow anyone and anything that gives them hope, he asks us to rush to their aide and be their shepherd before they're led astray by the wolves in sheeps' clothing.


Jesus asks us to seek out the lost.

It has always been my nature to care for the lost sheep that I happen upon, but that's nothing more than fulfilling the minimum requirement.  Jesus challenges us to do more - to be more.  He tells us to go looking for them.... to seek them out. 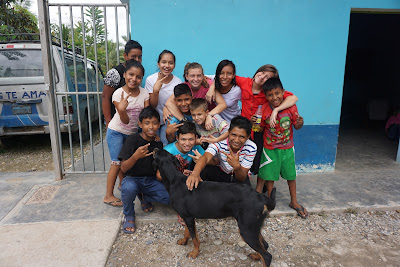 Time and again we've recognized our kids as the best missionaries on our team - and it's true. They go looking for the lost sheep and often times find them congregating in the dark, literally. In our town plaza there is one side which remains dark at night because every new light bulb is promptly busted out. As I watch my beautiful daughters approach this foreboding territory I beg the Lord for His protection and wisdom. "Ask and you shall receive." Jesus responded to my plea with these words of wisdom for Katelyn and Anna, "Don't ever leave because you're scared to stay, and don't ever stay because you're scared to leave." We talk often about the importance of allowing the Holy Spirit to guide us, but how do we know when the inspirations that we feel are from Him?  One indicator is the peacefulness that fills our hearts when we're in the midst of the Father's will.  It is that tranquility that they assess when deciding to stay or leave. 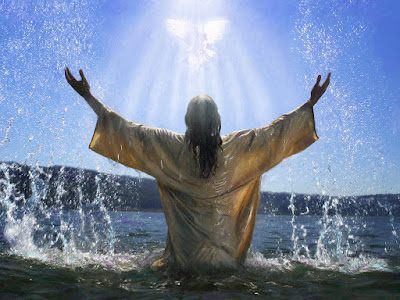 About six weeks ago we were hanging out in the plaza one night.  Anna and Katelyn approached some of the kids congregating in the dark and invited them to walk around the plaza, hoping that they would pass on the drugs being offered by their "friends". Several of them accepted the invitation.  During their loops, our daughters broached the topic of baptism and briefly explained the importance of being Christians. The Lost Sheep, as we call this group of wondering souls, were intrigued and wanted to know more. Knowing that we had to give the best 30-second elevator speech of all times, we briefly explained that during baptism we are filled with the Holy Spirit and our souls are forever transformed. They listened and then left, with no indication of what they thought. We were unsure of the effectiveness of our spiel until our daughters returned only moments later to report that "the group" wants to be baptized.  They collectively decided that we need to start a sacramental prep class in our home just for them.  It would meet every Saturday morning at 8AM, include a yummy American pancake breakfast and lots of fun... 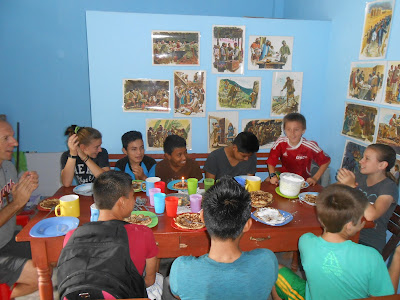 Each Saturday morning the Lost Sheep gather in our home. Upon arriving, after politely greeting Chris and I, they always make a beeline for the Legos. It seems that Legos draw boys of all ages from every part of the globe. Vehicles, structures and other creations come to life as I put the finishing touches on the yummy, American pancakes they like so much. We all crowd around our table, say a blessing and then dive in. A couple weeks ago we celebrated one of the boy's birthdays. He was happy to be with us since his parents were both intoxicated and unaware of the date. During breakfast we upheld the FMC tradition of honoring the birthday person. Each of us shared things about him that we enjoyed, respected, etc. It was really powerful - for him and the rest of us. Although he wasn't going to show his tears, I could tell he was crying in the inside.

I can't possibly provide the details of every gathering we've had, but want to highlight just a few. 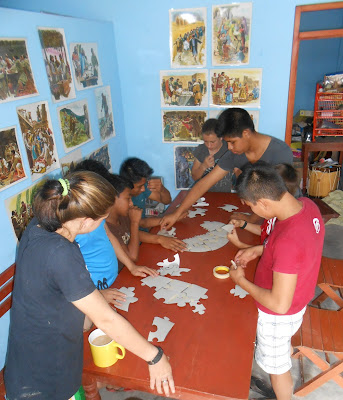 For one Saturday we made a giant heart-shaped puzzle that they worked together to assemble.

They were unaware of what the final shape would be... 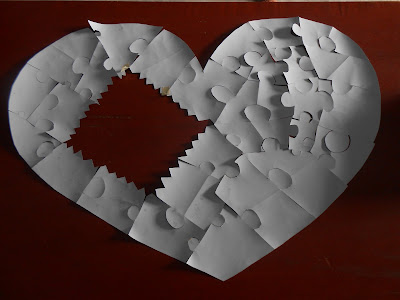 ...and that it would have a huge hole in the middle.

"What's wrong with having a big hole in the middle of your heart?", we asked, "You mean, things don't work right when they have big holes in them?" 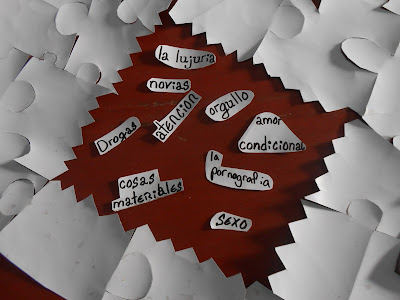 We agreed they needed something to fill the hole...


...so we gave them pieces of paper with words that represent things that people try to fill the holes in their hearts with: drugs, material possessions, pornography, girlfriends, etc.


The gaping hole still made the puzzle seem incomplete. 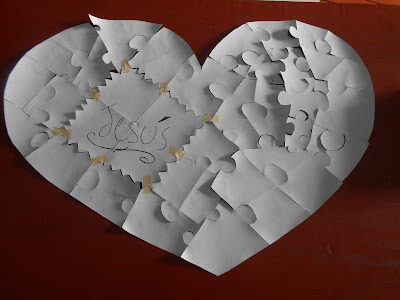 "What do you think is the only thing that can fill this hole in your heart?", we asked.


"Jesus", they surprisingly replied in unison.

"Let's learn a little bit about this person Jesus," we said before reading two stories from the bible: The Woman Caught in Adultery and The Prodigal Son.

This was the first time any of them had heard either of these stories and they were amazed at how applicable they are to life here in San Hilarion. We talked about the reality of our sinfulness and Jesus' unconditional, unending love. We spoke directly about their home lives and family situations, acknowledging the pain that they suffer when others make bad choices, but explaining the importance of forgiveness. We ended the day by reciting the Our Father and talking about the embedded truth: we can only approach the throne of God asking to be forgiven AS we've forgiven others. Until we've completely forgiven others, we have no business asking God's pardon for our own sinful choices.

"...and forgive us our trespasses AS we forgive those who trespass against us..." 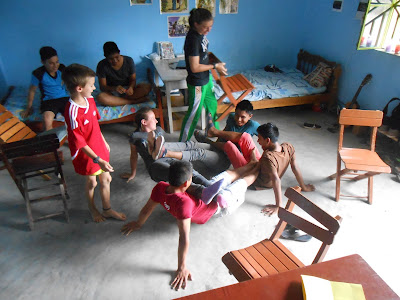 They boys were struck by the profound nature of the message. By the looks on their faces, I could tell they were considering their own ability (or inability) to forgive those that have hurt them most..


It was a little awkward, so Katelyn and Anna announced that they were going to make human tables. It was a perfect end to a fun morning.

The very next day we learned that it was Javier's 15th birthday. We offered to host a mini-celebration of cake and pop, but fully expected to lose out to his "boyz" who are always vying for his time.

He agreed to gather in the home of a mutual friend. As everyone was enjoying the sweet treats we honored Javier by sharing what each of us appreciate about him. His hard shell melted and what we saw was the fragile remains of a little boy who had experienced a lot of pain and hardship. We pray that he'll continue coming around so that he can experience the love that Jesus has for him. 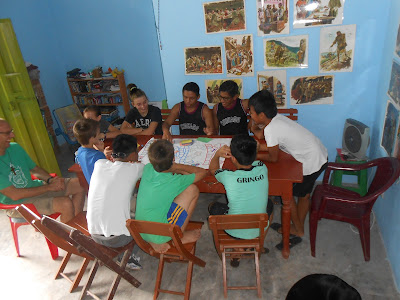 Another Saturday we played a board game that we had made. They moved their pieces along a path which spelled "AMEN" and were trying to reach "Heaven" at the end.

Various spaces included descriptions of either good or bad choices, which allowed them to skip forward or fall back.

The pile of draw cards offered the most entertainment. Anna and Katelyn had created over 60 cards that described common situations. For example, "You skipped school to do drugs with your friends. Move back 5 spaces." Another card read, "You carried water from the river for an elderly neighbor. Move ahead 4 spaces." 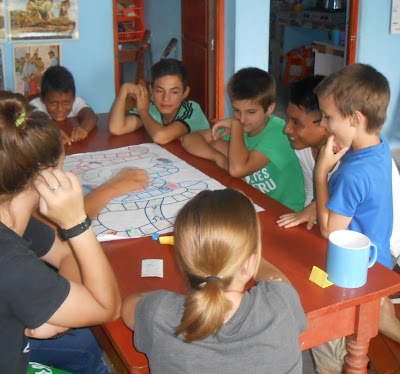 Some cards referenced specific events that had transpired, which made everyone laugh really hard:

"You told the gringas (their name for white people) that you love them. Move back 20 spaces."

After about an hour of play we had gone through the DRAW pile a couple times and decided we needed additional cards. 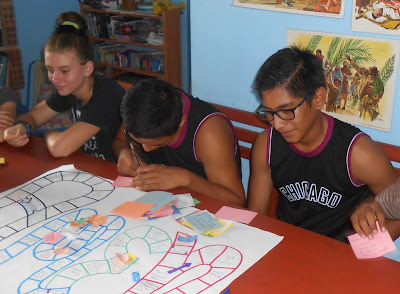 As the kids wracked their brains to think of both good choices and bad I realized that this was a perfect application of what we had talked about. They were not only differentiating good from bad, but qualifying just how bad something is to determine how far back a player needs to go on the board.

Their examples often seemed ridiculous, but effectively shed light on the scenarios they're faced with.

After our game and discussions were over we expected our guests to leave.  However, they stuck around our house for hours and hours. They played our other board games, built more Lego creations, hummed along with Chris as he strummed the guitar and sang praise and worship songs, and just enjoyed nice conversation. It was delightful.

When it was finally time to leave, they all inquired about our next meeting and felt disappointed to learn that we'd have to take a week off because of our trip into the remote valley of Bombonajillo. 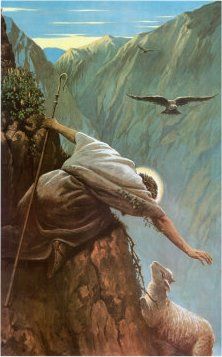 We're super excited to have found the Lost Sheep.


We pray for the grace to be able to follow Jesus' lead and bring them safely back to the flock.

We ask for prayers as we discern each gathering, that we're able to remain docile to the Spirit who knows exactly what these boys need.