Yesterday morning I was lost in prayer as I contemplated treatment options for Katelyn's possible case of cutaneous leishmaniasis, which is a parasitic disease causing large lesions on the skin. Katelyn, who was sitting nearby, politely interrupted to share a quote from the book she's reading,

Knowing what occupied my mind, she simply smiled lovingly and allowed me to return to prayer. I acknowledged the beauty of the quote, but it wasn't until a few hours later that it really hit me.

We drove into Tarapoto to visit the clinic that could take a culture of Katelyn's wound, which is necessary for further diagnosis. Early that morning, as I was trying to get everyone out the door, I specifically said, "We have to go. I don't want to show up at 11:00 as everyone is leaving for lunch."

When our camioneta arrived in Tarapoto there was a moto driver smiling and waving eagerly. Assuming he simply wanted our business I dismissed his attempt to get our attention. Moments later he was embracing me, giggling and talking a thousand miles an hour.  I assumed Katelyn understood what was happening because she understands everyone, but she was clueless. She listened more intently as the man recounted a series of events and surmised that we had helped his child.  We both understood that he really wanted us to visit his house and see his son. Although the man looked familiar, I couldn't place him. I explained the urgency we felt to get to the clinic and suggested that maybe we could stop by his house afterward. The moto driver was completely unsatisfied with my alternate plan and insisted that we visit his son. As we drove to his home Katelyn asked questions trying to figure things out.  All of the sudden, the light bulb went on.

This was Amir Sebastian's dad. Amir is a 9 month old baby that only weighs 10 pounds. Back in May we paid for Amir and his mom to fly to Lima to see pediatric specialists who performed life-saving surgeries on his internal organs. Since their return, Team Carmody has supported them in the fundraisers they've had to help pay for his medicine, hospitalizations, etc. Eight weeks ago Amir was diagnosed, by the specialists in Lima, as a quadriplegic. Although his parents felt devastated, they continually praised God for the gift that their son is to them. They humbly begged for a miracle of healing and asked that we join them in prayer.

As we continued on toward their home, I realized that I would meet Amir for the first time and my heart burst with joy. Amir has spent the majority of his life in hospitals and only recently was allowed to go home. As I considered the tremendous hardships that this family has suffered, I recalled the quote that Katelyn read to me hours prior,

The urgency I felt to get Katelyn to the clinic was replaced with complete peacefulness as I thanked the Lord for the opportunity to step outside of myself and my own little world.

When Katelyn, Jack and I arrived at Amir's home we were quickly greeted by his mom who was sobbing and laughing simultaneously.  Like her husband, she couldn't talk fast enough to share the thoughts of her heart. Thankfully, Katelyn assumed the role of translator and kept me in the loop. We learned that four weeks ago, shortly after we all began praying for a miracle of healing, the Lord revealed His majesty as Amir began to move his fingers. Within hours he was lifting his arms and kicking the legs which had laid limp since birth. She talked about their visit to Senor de los Milagros (Lord of Miracles) in Lima, but it was hard to decipher the details.

As Amir was placed into my arms I was amazed....simply amazed.  When his tiny little fingers grasped my thumb and his fragile little legs kicked about I was completely overwhelmed with emotion.  I asked his mom, "So, how has he been doing?" and her smile vanished.  She shamefully bowed her head and whispered through her tears, "He's not growing."  When I asked "why" the mom remained quiet, but the older sister quickly announced that they have no money for food - not for Amir or the rest of the family. She said that the baby is supposed to have 5 bottles of enriched formula a day, but that they can only afford to give him one. The dad rushed to the kitchen to retrieve a large box full of medicine and explained that all the money he earns goes to pay for the baby's medical treatment. As we discussed their situation in more depth it became immediately obvious that they need Team Carmody's help.  In addition to buying their family food, I offered to buy a large canister of formula with the little bit of money I had in my wallet. This would allow them to give the baby 5 bottles a day for an entire week. I promised to deliver several more canisters in a couple days when we return to Tarapoto for Katelyn's test results. During conversation we learned that Amir must see the specialists in Lima monthly, but his family is unable to pay for the airfare. So, on behalf of Team Carmody, we agreed to pay the $122 needed for July's trip. I told them we could pay for August's visit as well, but he insisted on trying to earn the money himself, which is so honorable. 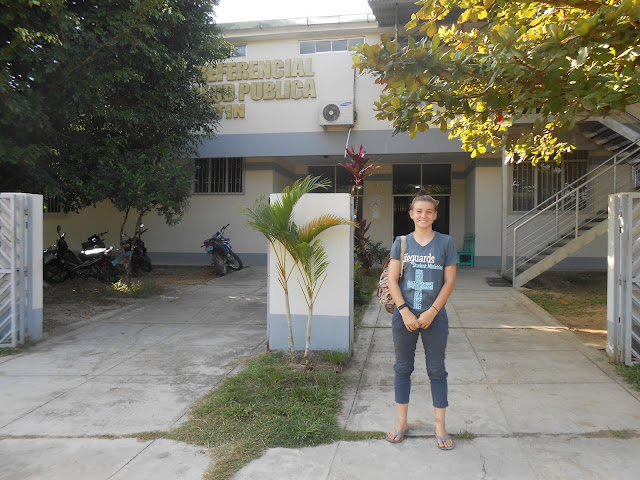 When our visit was over, Ronaldo, Amir's dad, took us in his moto to the clinic where Katelyn was to have a culture drawn.  Ironically, Katelyn and I glanced down at my watch as we were arriving and noticed it was 11:00. Katelyn laughed and said, "I think the Lord's plan was better than yours."

For years I was encouraged by the saying, "What doesn't kill you makes you stronger."

More recently I've found comfort in knowing that "Jesus does not remove the burdens of life, but the anguish of our hearts; He does not take the cross away from us, but carries it with us. And with Him, every burden becomes light, because He is the rest that we seek."
(Pope Francis)

If the Holy Spirit is nudging you to support us financially, please visit:
www.carmodyfamily.familymissionscompany.com
or call Family Missions Company at (337) 893-6111