Her Dying Wish Was to be a Bride 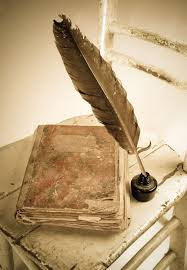 A very good friend often reminds me that


"everyone has a story".


As we step in and out of each other's stories, we can only capture a glimpse of what those lives really entail.


Last week we were invited to step into the lives of Victor and Karina, a very poor couple in their mid-30s who have two children ages 6 and 16. They live in Tres Unidos, a small village a few hours away from our home. 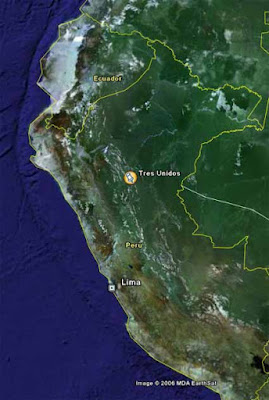 Victor and Karina had been preparing for the sacrament of marriage and eagerly awaited their special day. However, when Karina became very ill the doctors discovered stage 4 colon cancer. Unsure of what lie ahead, they postponed the wedding.

I certainly don't know their entire story, but want to share the chapter that we had the privilege of being a pat of.

Saturday afternoon we received a phone call from our friend Andy, a fellow FMC missionary here in Peru. He'd just been informed of Karina's biopsy results, which indicated her recently diagnosed and untreated cancer was so advanced that she had only two weeks to live, at best.


With the news of Karina's prognosis we realized that the only opportunity for them to get married before she died would be Sunday -
the very next day.

Recognizing both the importance and urgency of this situation, we rearranged our schedule
and made ourselves available to help in every way possible.  Chris and the boys covered our regular ministries so that Anna, Katelyn and I could accompany Andy.

We selected a half dozen wedding dresses that seemed about Karina's size and headed out to Andy's remote village, where Victor and Karina also live.

At 9:30PM we arrived at their home with the dreadful biopsy results as well as an invitation to be married the following day.  Allowing the Spirit to guide this VERY difficult conversation, we navigated both the logistics and emotional agony. 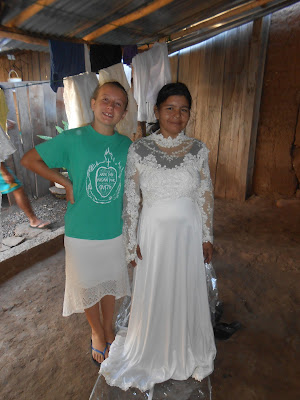 After hours of talking, singing and praying we finally left around 12:30AM, promising to return in the morning to help Karina select a dress and prepare for their big day.

As promised, we arrived at their home just a couple hours before Mass.

We coordinated food preparation with the neighbors, who agreed to make lunch for about 100 people. 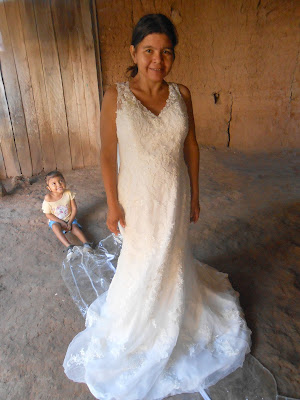 Karina tried on the various dresses that we brought and selected the one that, by the grace of God, fit perfectly albeit a few alterations to the length (which we were able to do with some safety pins).

Andy found a little shop that sells rings and bought two that were just the right size. 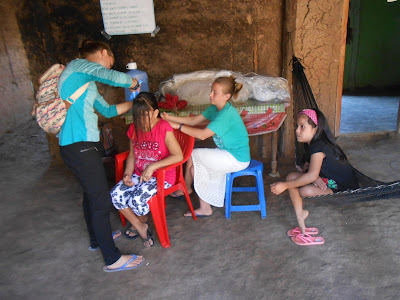 Katelyn and Anna braided Karina's hair and adorned her with the most beautiful necklace and matching earrings, which she had set aside for this special occasion. 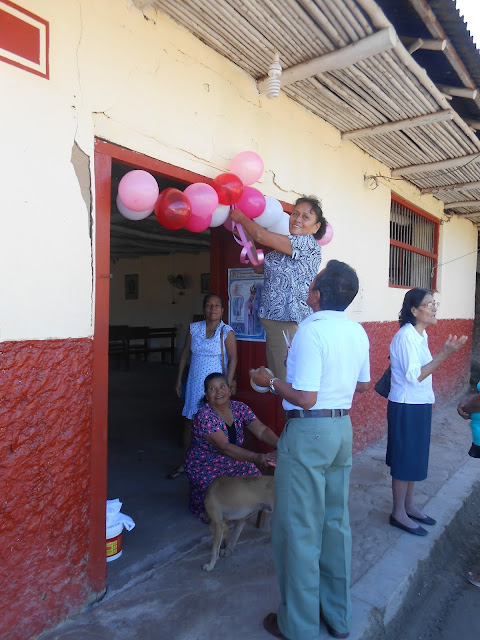 After we bought balloons and ribbon, members of the community offered to decorate the church.

Everything was coming together so perfectly that one might suspect God Himself had a hand in it!!

As friends and neighbors arrived nothing was shared regarding Karina's prognosis, only that Father Miguel was coming and could celebrate their matrimony. Happiness filled the air as the busyness of preparing for such a grand event consumed us all.  I too tried my best to remain joyful, but several times my facade failed.  As I looked around at all the smiling faces, I knew that all these same people would be gathered in this same place in a matter of days to grieve the loss of our beautiful bride.  They would coordinate food and decide what she would wear just as we were doing today....  It was most difficult to see Karina's children, who knew the truth, watching at a bit of distance in disbelief.  When someone caught me crying and asked what was wrong, I could only smile and say "Karina is SO beautiful. I'm very happy that they will be married today!" ...which was true. 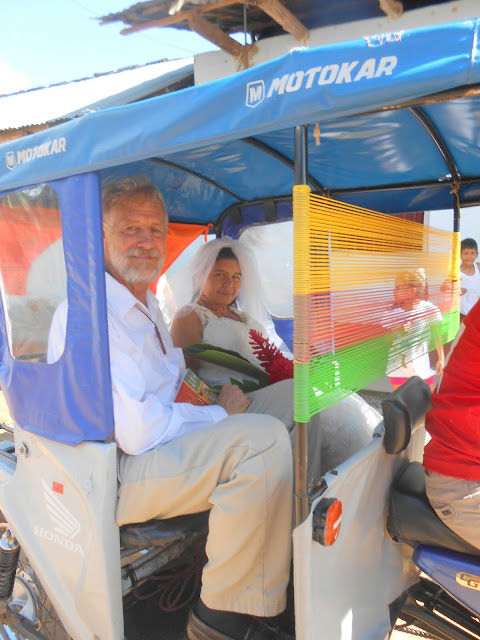 Karina always imagined herself walking to the church in procession on her wedding day, but sadly admitted she just didn't have the strength.

A moto took her and Andy instead. 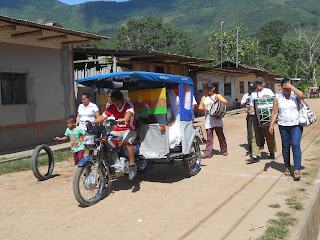 People from the community followed behind playing festive music, while friends walked alongside. At first there were just a few of us, but by the time we arrived at the town plaza there was a nice group accompanying her to the church. 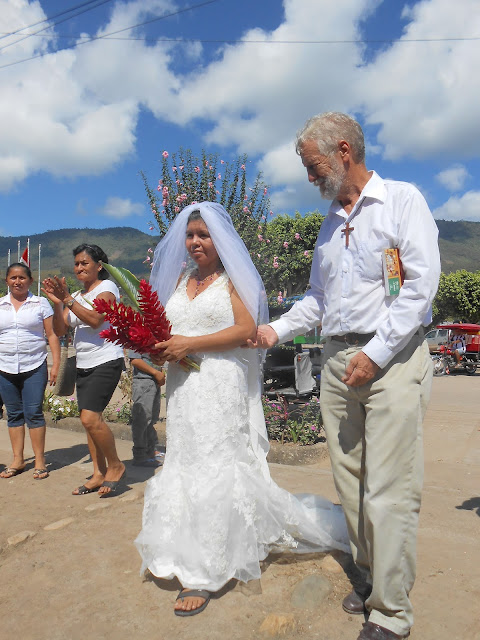 Both Victor and Karina's families live far away. Given the short notice, they were unable to attend.

Andy did an amazing job of stepping up and filling that role. 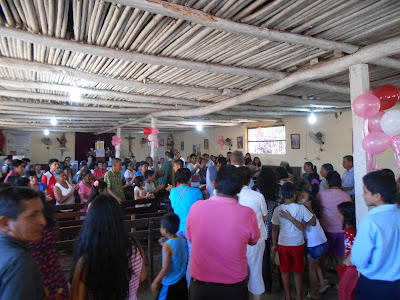 As I walked into the church, the excitement was tangible.

The community was thrilled to celebrate this joyous occasion altogether. 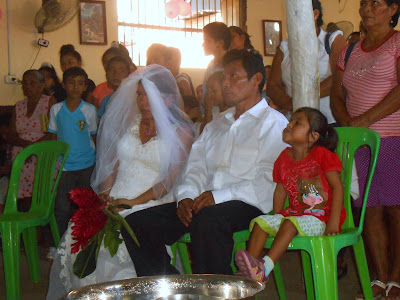 After Victor and Karina found their places in the front of the church, Katelyn, Anna and I sneaked out the back in a rush to make it to our next commitment. Although we wanted to stay and be a part of their big day, we knew that our job was done.

We jumped into a moto and headed back through the jungle on the little dirt path. When we arrived at the river we negotiated a rate for crossing the river in a half-empty boat because we couldn't afford to wait around for other passengers.  Thankfully, they only charged us $1 more. We caught the first camioneta that passed by on the highway and prayed for an uneventful trip. Moments after arriving home we met up with Chris and the boys, who had just started eating lunch at a friend's house.  When we returned home kids were waiting by our house for our next scheduled activity.  It all came together so perfectly that one may suspect that God Himself had a hand in it... wait a minute, didn't I already say that??? 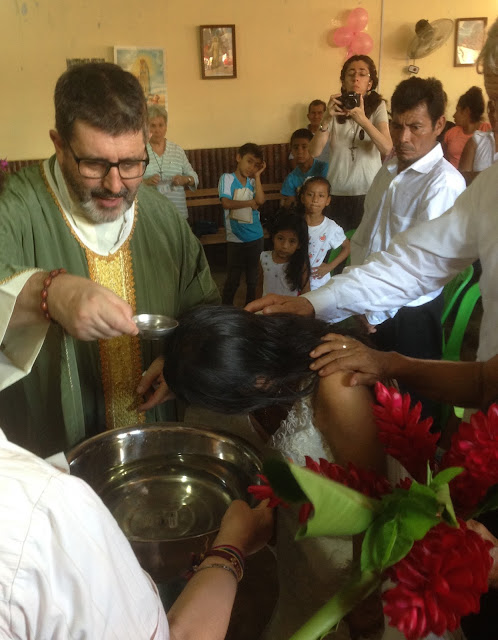 Victor and Karina had an incredibly blessed day. Karina was baptized, received her First Holy Communion, was confirmed and received the sacrament of matrimony. 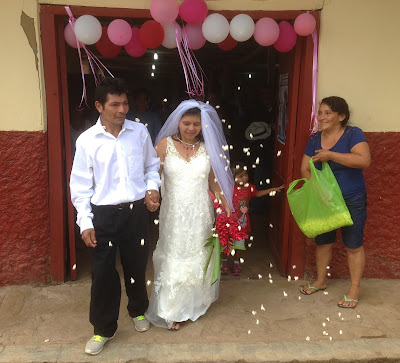 We give thanks to our God who does real things for real people in the real world.  We give thanks for every member of Team Carmody who makes this mission possible - especially those that have donated their wedding dresses. Together we are bringing the love of Jesus to His beloved children here in Peru.

We ask for your prayers, that Victor, Karina and their children are able to draw their strength from Jesus during the heartbreaking days ahead.

If the Holy Spirit is nudging you to support us financially, please visit:
www.carmodyfamily.familymissionscompany.com
or call Family Missions Company at (337) 893-6111