Our Lost Sheep Received Their Sacraments 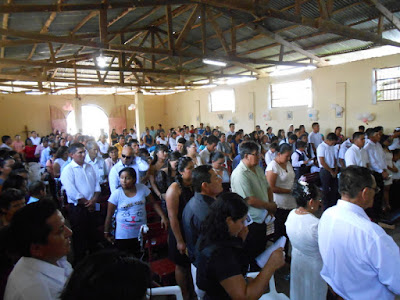 November 26, 2017
This date has been starred, circled and highlighted on calendars all around town for almost a year. With eager anticipation about 150 people filed in, found places to either sit or stand, and waited patiently for the celebration to begin.  The joy in the church was tangible.

The murmur of voices created a buzz of excitement as family members and friends visited while waiting for Father Paco to arrive. 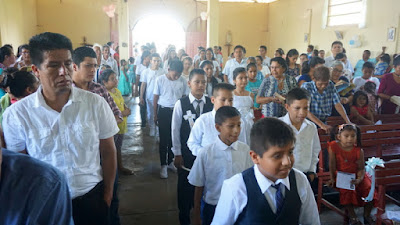 The ceremony began with a procession of candidates. Although there was an obvious mixture of excitement, curiosity and apprehension, it seemed that all the kids were happy to be wearing their new, special clothes.

Thanks to Team Carmody, all our Lost Sheep had new dress pants and a sporty white shirt. Those that needed them even got new shoes and underwear. I kept their new clothes in our home until their big day to eliminate the temptation for them to wear the clothes ahead of time.  It was important to all of us that their outward appearance be as spotless and new as their souls would be after receiving baptism.

When we were shopping, most of the guys choose either black or dark gray pants, which is what I encouraged, because it's practical. Not only would they look handsome for our sacrament day, but they could wear the pants in the future without having to worry about them getting all dirty and stained.

Jherson, however, was only concerned about his sacrament day.  He wanted everything to be white, including his shoes, socks and undies. Given Jherson's dark past, he felt especially eager to be cleansed and made new by the waters of baptism. He wanted his outward appearance to represent the purity that he so greatly longed for on the inside.  As so it was, Jherson wore all white.

Father Paco invited the kids to the front to talk with them about the sacraments that they had prepared to receive.

Being "Christ the King Sunday", he explained the importance of recognizing and accepting Christ as our one and only King.  We honor Our King. We love Our King. We live in service to Our King. 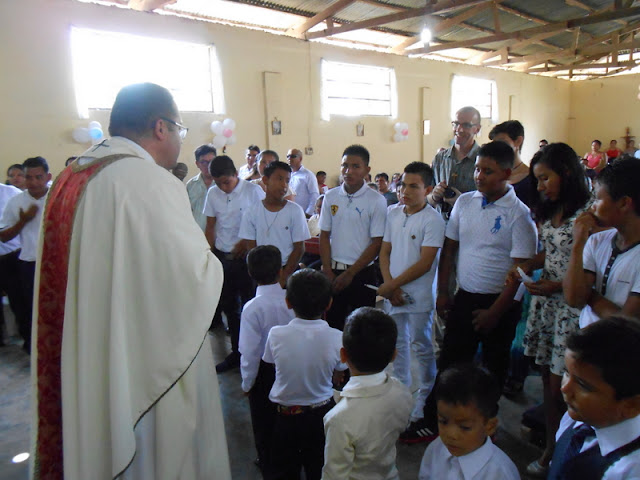 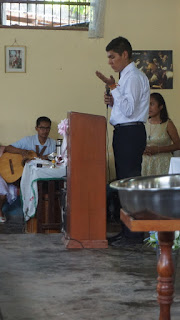 As Holy Mass got underway, it was affirming to see the teens who had received their sacraments last year participate in the celebration. Our friend Isaac read the psalm prayers and did a beautiful job!

Knowing that this day would be replete with tears, I never imagined that the readings would make me cry.  How though, could I keep a dry eye when the first reading was about lost sheep and the gospel spoke of our final judgement when all will be separated like sheep and goats?  As I glanced over at my own Lost Sheep it hit me in a profound way that the Word of God is truly alive!!


As part of the Catholic baptismal ceremony the priest uses holy oils to bestow special blessings upon the recipients. First, their heads are anointed, as described in Psalm 23:5, "You anoint my head with oil."  In Old Testament times, the Jews used holy oils to signify a special designation from God; as anointed ones, they received the honor of being His beloved servants.  We too receive that honor during baptism.

The Oil of Catechumens has been used since A.D. 215 when St. Hippolytus, in his Apostolic Tradition, wrote of the "oil of exorcism" used to anoint a candidate immediately before his baptism. Still to this day, priests offer the prayer of exorcism and then anoint the person on the chest saying, "I anoint you with the oil of salvation in the name of Christ our Savior, may He strengthen you with  His power, who lives and reigns forever and ever." This blessing was visibly powerful for our Lost Sheep; perhaps because of past occult associations. 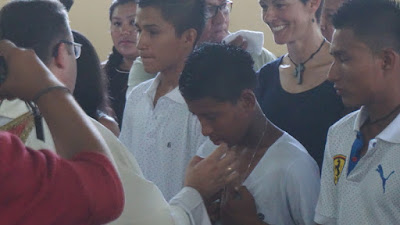 Finally, Father used holy chrism, which is an aromatic resin mixture of olive oil and balsam, to anoint each person as "priest, prophet and king".  This ancient tradition of sanctification has been used for several thousands of years. 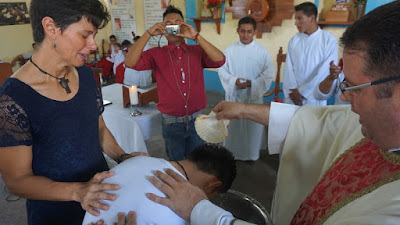 As the waters of baptism splashed  over the heads of each of our Lost Sheep the Holy Spirit came in power to cleanse and purify them of all their past misgivings.

As I stood with my hands upon their backs and shoulders, I could feel the Spirit moving through them. When I opened my eyes it seemed as though I could see their sins being washed away.  Despite my effort to  maintain control of my emotions, it was impossible.  Tears of joy erupted from the depths of my soul. I was overwhelmed with gratitude, that Jesus trusted us enough to call us here to the jungles of Peru for these kids. As sub-contracted shepherds, he sent us out looking for His lost sheep.  All praise be to God that we not only found them, but with the help of His Spirit we've been able to guide them back to their true shepherd, Jesus Christ. 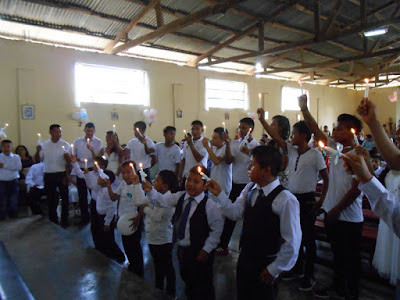 Next, Father Paco gave each person "the light of Christ".

Together, they lifted their candles and we all sang "Esta la Luz de Cristo", which is the Spanish version of "This Little Light of Mine". 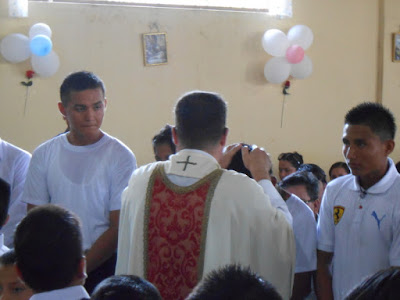 During the Confirmation ceremony Father Paco asked that the church be silent.  Together, as a unified community, we begged the Lord for an incredibly outpouring of the Holy Spirit.... 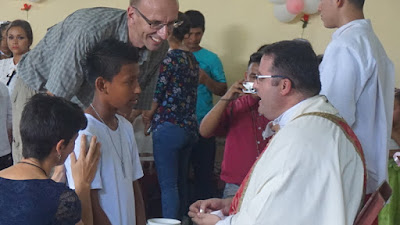 As the confirmation ceremony continued, Father invited each kid to the front of the church where he talked with them and gave counsel.

Using holy chrism, Father traced a cross on each one's head signifying that he is now ready to profess his faith openly and practice it fearlessly. With the gifts of the Holy Spirit, Father reminded them, there is nothing that they can't do.

During confirmation, the priest or bishop always follows this anointing with a traditional (gentle) "slap" on the cheek, which signifies that the person must be ready to suffer anything, even death, for the sake of Christ. 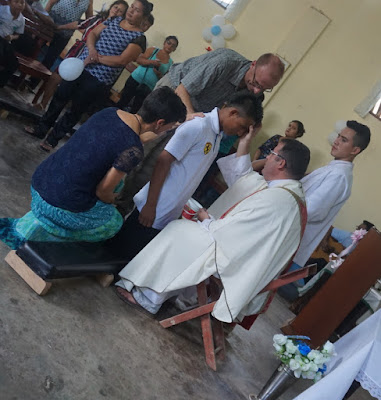 When Javier received his blessing a flood of tears fell from my leaky eyes as I recalled Michael saying to me, just a couple weeks ago,

"Mom, when I was praying Jesus told me that He wants Javier to be a priest."


During our formation at FMC we were taught about the importance of each individual soul. Before we left, they told us that Jesus may have called us to give up everything (our very lives) for the salvation of one person. If we weren't willing to "give it all" for one person, we ought not go.  Sometimes I feel like Javier is that one person... 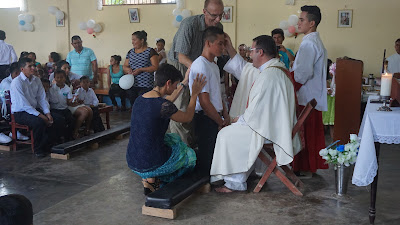 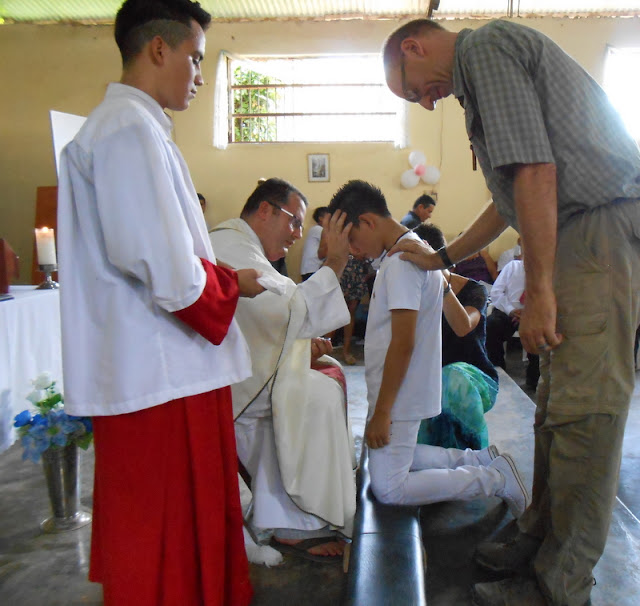 It was incredibly emotional to be with each of the guys as they received the Spirit... 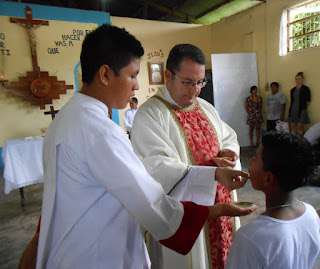 Next, several of them received their First Holy Communion.

In addition to the celebration of Baptism, Confirmation and First Holy Communion, we also had the privilege of celebrating a marriage.  It was beautiful to see the community gather around to witness these two lovebirds profess their commitment to live in fidelity until death. 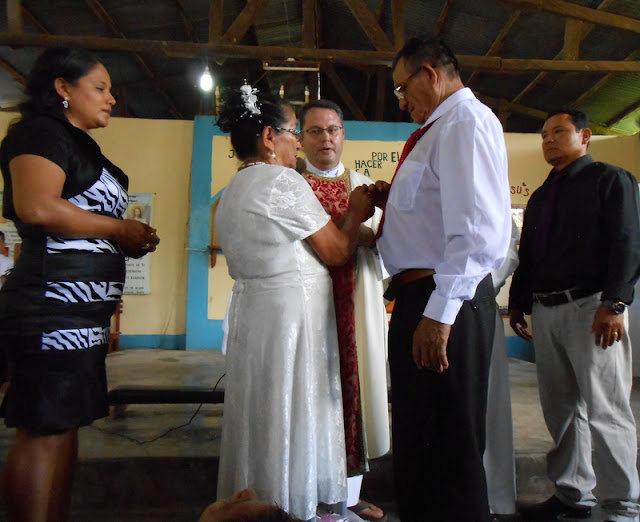 When Father Paco gave us all his final blessing I realized that Holy Mass had taken almost 4 hours. It's amazing that the time passed so quickly.  I suppose it's because each moment was just so exciting!!  It's incredible to me that, despite the fact that everyone was drenched in sweat, nobody complained about the length of the service or the searing heat. Everyone was simply filled with love and joy, appreciative to have a priest available to celebrate the sacraments. 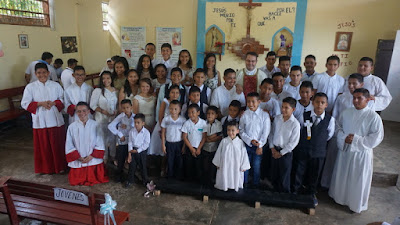 We tried to gather everyone for a photo, but many had already left with their families.

I think our final count was around 45 people who received sacraments this day.


Filled with joy and excitement, I was hoping for one last photo of the guys who have become known around town as my "Peruvian kids", but they were all too tired.

Everyone left and went home to rest and have lunch. 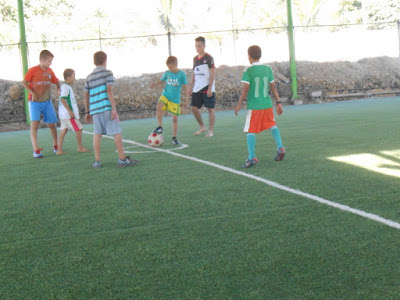 Later that afternoon we gathered at the covered soccer court to celebrate. 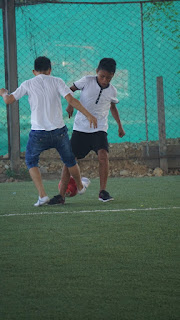 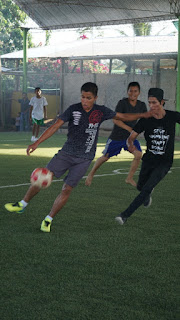 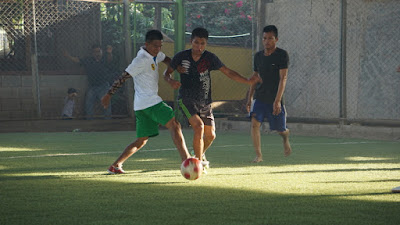 We all took turns: the moms and girls, the younger boys, and then the teens. 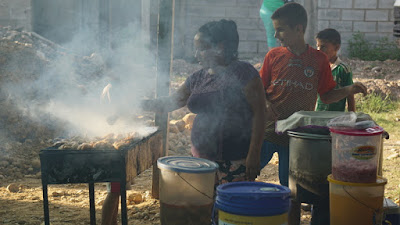 Laura is a single mom in our village who earns a living by selling food outside her home.

She prepared food for all 60 people who came to celebrate with us on Sunday. She made grilled chicken, chaufa, onion salad, yucca and homemade maracuya juice.  It was delicious!!!


They want to say, "THANKS", for accepting them despite their faults and failings!!

They want to say, "THANKS" for loving them just as they are!

We too thank you for making all this possible.  We are truly blessed to have such an amazing team!  We ask that you continue to pray for our Precious Sheep, knowing that they still struggle with drug addiction.  Despite the spiritually uplifting experiences that we have together, they return to broken homes and abusive situations. They are attempting to evangelize their friends who constantly try to drag them back into the darkness, which is SO hard!! Finally, I ask that you pray that each one of them passes their respective grade in high school, which ends for the year on December 22.  We've been helping them with their homework, but the bigger challenge they face is trying to change their reputation with their peers and teachers.  Our moto is "One Day at a Time."