After months and months of preparation, the big night finally arrived. Excitement filled the air... 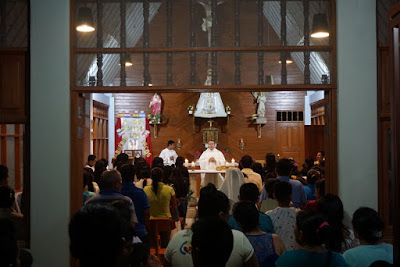 It all started with Holy Mass in the chapel, which is located in the center of the orphanage.

So many people attended that there was standing room only.  People spilled out into the corridor in front of the chapel and filled the adjacent hallways. 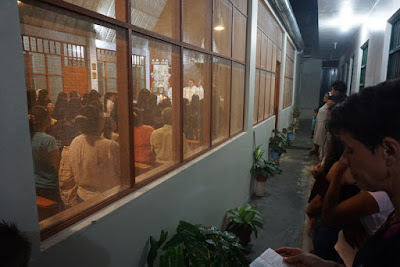 Not enough space in the church? What a great problem to have!!! 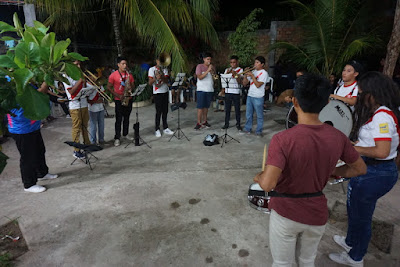 After Holy Mass the band from the local high school performed some traditional "pep rally" type songs because later that night Peru would be playing a very important soccer match which would determine whether or not they qualify for the World Cup.

(We're happy to report that Peru won and will be playing in Russia in 2018. This is the first time in 36 years that Peru has qualified for the World Cup.  Everyone is VERY excited!!!) 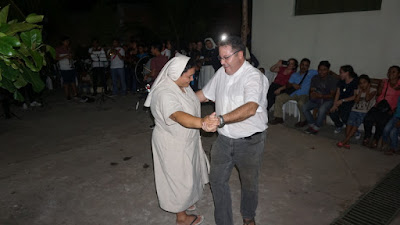 Our priest, Father Paco, kicked off the festivities by inviting one of the nuns to a traditional Spanish two-step of sorts. 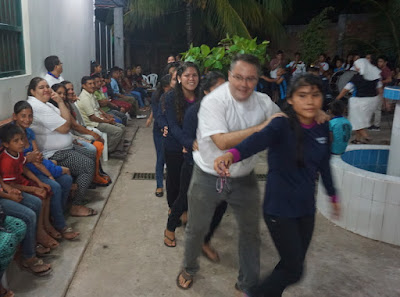 Next, he gathered all the girls into a conga line and paraded around the courtyard.

Although they pretended to be embarrassed, we could all tell that they were having the time of their lives!

Finally it was time for Anna's recital. 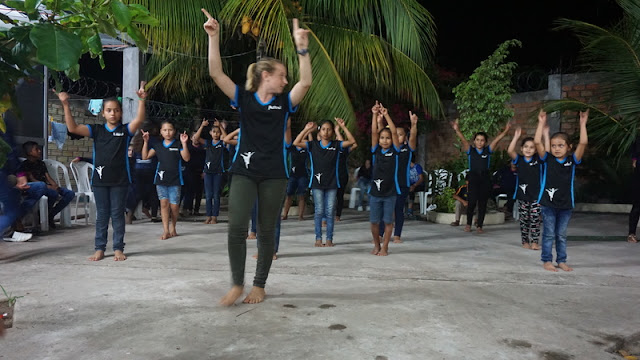 Here's a clip of their routine:

When the girls were done they scurried about in excitement.
It was hard to get them all to stand still for a photo...

Next up was Katelyn's group. 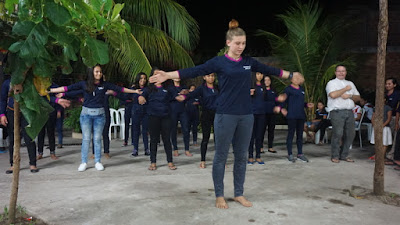 Here's a clip of their dance:


I could tell by the twinkles in their eyes that the older girls were really excited about how well their dance went.  They had worked hard and it showed! We were all so proud of them!

This beautiful night was bitter sweet. After spending another whole year together, our relationships have grown into something very special. It was fun and exciting to celebrate and we left eager to begin again in March with the start of their next school year.  However, our "good-byes" were hard for many reasons. In December, when the nuns return to their countries of origin for the holiday, these orphaned young ladies will return to the households from which they came, most of which are horribly abusive (sexually) and severely dysfunctional.  It absolutely breaks our hearts to know the terror that awaits them and devastates us to know there is nothing we can do to save them from that misery.  It's also hard knowing that there are some of the girls that we'll never see again. Our opportunity to teach them about the unconditional, eternal love of Jesus has passed.  It's natural to wonder if we helped them at all.  Were they able to gain even a bit more appreciation for their own dignity and worth as beautiful princesses of Our King? Will they remember our talks and activities, which we designed to help them draw closer to Jesus, who is ultimately all they need? We ask that you join us in prayer as our precious princesses venture back into the den of lions.  We pray for their safety, their fortitude and ability to persevere through all the hardships that will likely come.

We thank God for every penny that people have been willing to share with us because without that support, this mission would not be possible!