Do you remember Amalita?   Did you see the pictures of her black tarp house where she slept on the cold, damp ground?  For a quick reminder, read our blog "Amalita's House" (Jan.2017)

In the Fall of 2016 we built Amalita a spacious wooden home (300 sq.ft) with a cement floor and indoor toilet. We stopped by often to visit and made sure she had the necessary food staples. With a couple trips to the doctor her chronic cough disappeared and Amalita reported feeling "good".  After she began attending the activities in the church Amalita told me (with a great big smile) that she felt "great" for the first time in years. 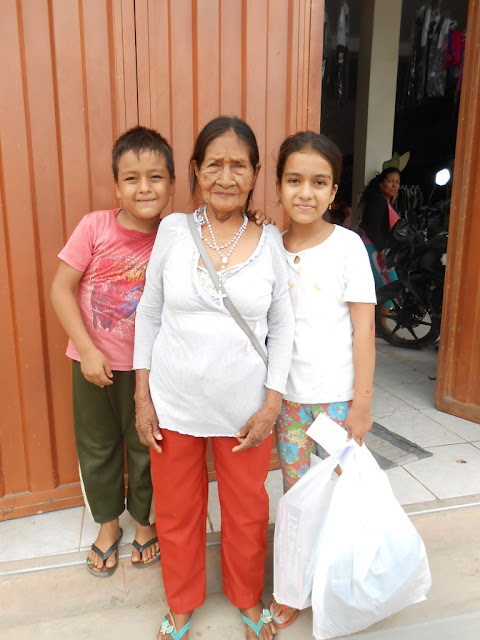 It's no surprise that when Amalita turned her gaze to Jesus everything in her life improved.  Shortly thereafter, she began looking for opportunities to help others, even though she still had "nothing" by the world's standards.

Just recently Amalita took in two great-grandchildren from Lima whose situation was unsustainable. She lovingly received them without concern for how she would provide. "How irresponsible!", you may say, "The lady can hardly take care of herself!"  On the contrary! By carefully assessing our capacities and making calculated decisions based on our available resources, we leave God zero room to reveal His majesty.  Through the mysterious workings of the Holy Spirit Amalita has had everything she's needed to care for these youngsters since their arrival. 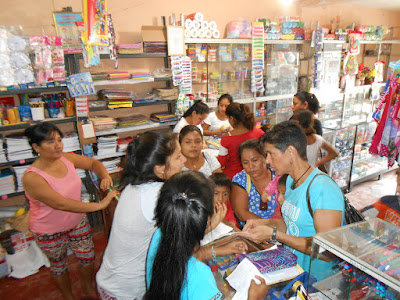 A few weeks ago Amalita visited our house to explain her predicament.  Although she desired to give her grandkids the opportunity to go to school, she could not afford the required uniforms and materials.

"Is there anything you can do to help me help them?" she humbly asked.

"Of course" is ALWAYS the correct answer to that question.

We discussed the details and picked a date to travel to the larger city together.  In the days that followed several others appeared at our door; some with real needs and others simply wanting free hand-outs.  Thankfully, after living here for two years, we know enough about people's situations to differentiate between honest pleas and theatrical petitions.

With a van full of moms and kids we went searching for a good deal.  All praise be to God, we were able to buy all the necessary supplies for 15 kids, who otherwise would not have been able to attend school. 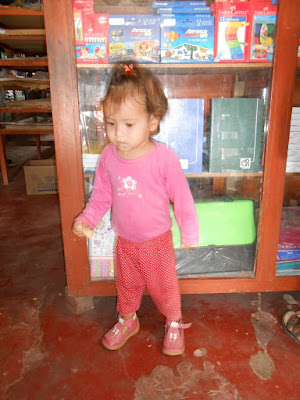 Amidst the commotion I noticed one of our youngest companions standing alone off to the side.  She was trying hard to keep her balance and lacked the confidence she needed to walk independently. Given her size I assumed that she was about one year old. I knelt down and smiled. Gently picking her up, I asked her name... at which point she started crying. I was disappointed, but not surprised.  Lots of kids are scared the first time they see "gringos" ~ especially up close! When Mom appeared I asked basic questions about the little girl's name and age. With her second birthday fast approaching I realized that malnutrition was the culprit.  As I considered the toll it had taken on her physical development, I couldn't help wonder how her mind had been impacted as well.


Embarrassed to exist within my own skin I recalled times past when I've condemned the poor for their seemingly inadequate decision making skills.


"Why don't they (fill in the blank)   ?"
I would demand, feeling angry about their inability to "do what was so obviously right".


I'm not sure that I've ever considered how their circumstances could have compromised their intellectual capacity.

As we were leaving the store Chris tried to herd all the kids together for a photo, but many were too excited and just kept running from this spot to the next, swinging their bags in every different direction.  With the help of Team Carmody they realized that attending school was a real possibility ~ some for the first time in their lives! 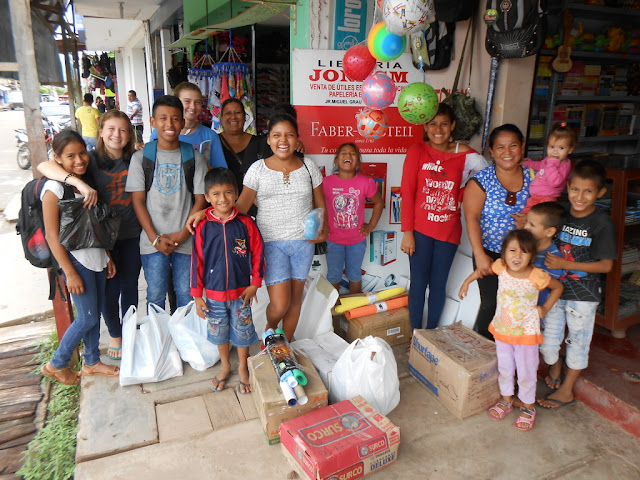 As I paid the final bill my stomach tightened.... We had spent so much!!  How were we going to buy uniforms for all these kids AND also help the other families whose circumstances were equally as dire.  As I looked around I remembered that Amalita's grandkids weren't able to come with us... the very kids who had inspired this outreach effort.  I closed my eyes and begged God for more faith.  If only I could be as confident as Amalita that the Lord would provide!!

As everyone piled into the van we recognized the opportunity to talk about our concerns...


"It's better for lots of families to receive some help
than
less families to get everything they need,
right?"

Everyone nodded their heads in agreement.  Recalling the vast number of families whose kids were in jeopardy of not being able to attend school, we encouraged them to prayerfully consider whether or not they could scrounge up uniforms so that we could use our remaining funds to help others. Historically, I think these parents felt overwhelmed by the expense of education and allowed the evil spirit of discouragement to dissuade them from even trying to make it happen.  However, with a restored sense of hope they had a bit more confidence.  Over the course of the next several days most of these youngster found used uniforms or figured out how to re-purpose those from years past.  Thank you JESUS!

In effort to manage all the requests we received we compiled a list. One by one we assessed the needs and invited those whose situations were the worst to meet us at the shop in San Hilarion. 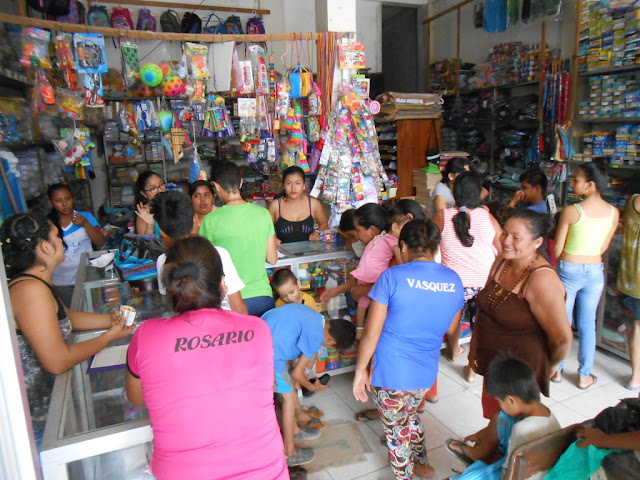 Thanks to the VERY generous donations we've recently received from Team Carmody, another 13 kids were able to get what they needed to attend school... 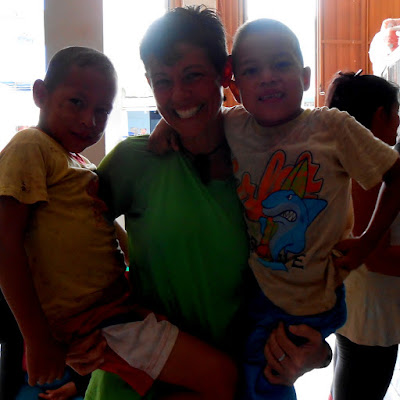 ...including our beloved little neighbors Jose and his brother Fernando.

Last year was their first-ever experience with school.  Now, knowing what to expect, they were super excited for the first day to arrive!! 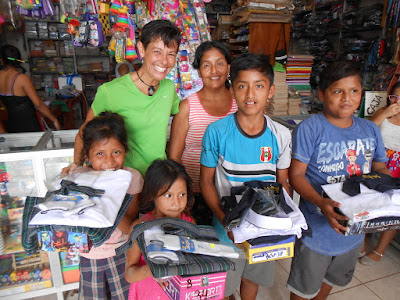 We were especially blessed to help this family whose dad abandoned them long ago.

The mom works two jobs trying to provide. During the day she serves food at a restaurant, earning the equivalent of $4 for six hours of work.  In the evening she sells chicken and rice from a street cart until 2AM and thanks God for every customer that comes.

Despite her tremendous effort she often falls short of being able to provide. Last year this family struggled just to survive, so the thought of going to school was out of the question. This year they were SUPER excited at the possibility of things being different.  As we talked through the possibility of helping them, the older boys couldn't stop smiling and the little girls giggled nonstop. It was precious!


In the bible we learn how to be good servants:
"When you hold a banquet, invite the poor, the crippled, the blind;
blessed indeed will you be because of their inability to repay you.
For you will be repaid at the resurrection of the righteous."
(Luke 14:14)

Although we didn't expect anything in return for the simple gesture of sharing the resources of Team Carmody with those in most need, there was one family that insisted on preparing a delicious lunch of duck, rice and a mixture of yummy vegetables. 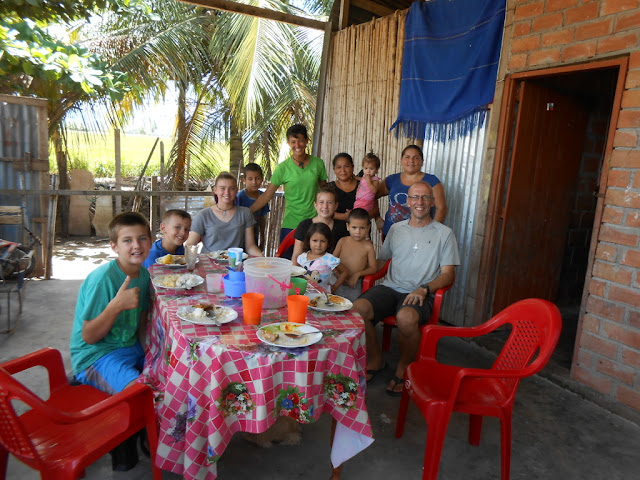 The first day of school was a wake-up call... literally.

After 2 1/2 months of sleeping-in and spending lazy days playing soccer and swimming in the river, Javier, Jherson and Ivan had to wake up at 4:30AM to get ready before driving 45 minutes to the nearby town (Bellavista) where their school starts at 6:30AM.

Shortly after returning from Bellavista I heard giggling outside our front door and then a rapid series of pounds and knocks.  Jose and Fernando were super excited to get ready for school.

Great question!  I don't suppose they need to, but we agreed to be the keepers of their uniforms to avoid the multitude of problems we encountered last year. 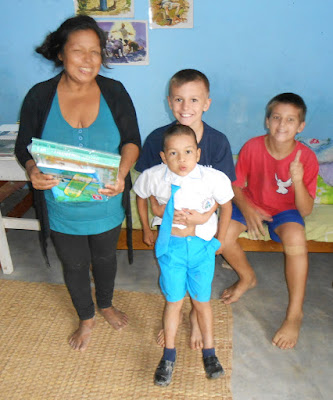 Often times when I got to their house it was immediately evident that their mom had done nothing with their uniforms after the boys peeled them off their dirty little bodies the day before.  After frantically searching we might find a filthy button-up shirt in a ball under the bed and urine soaked shorts in the backyard. Sometimes their mom would shake out the clothes and try to convince her boys that they were fine to wear.  Other times she would try to persuade them to go to school in street clothes, claiming that it was "no problem", but the boys knew better.  Both options were terrible and the boys were well acquainted with the consequences of both.  The teachers would reprimand them and often exclude them from activities.  Their peers would tease them and sometimes even pee on them, claiming that they had mistaken the boys for the urinal. It's no wonder that Jose and Fernando had such a hard time getting excited to go to school. 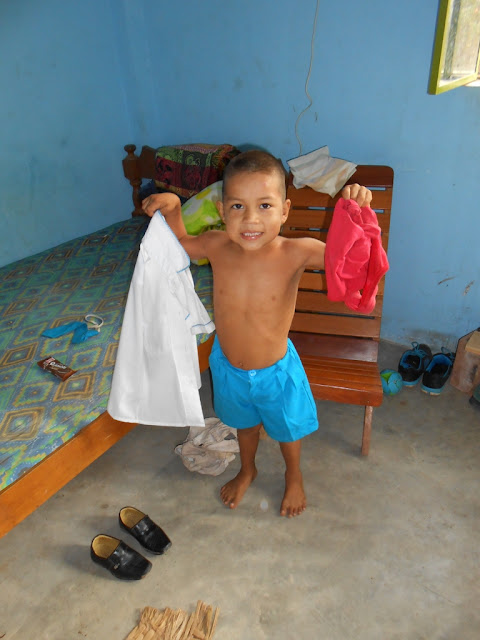 This year we agreed to launder the boys clothes each day when they return from school and keep them in our home so that they're available the following morning.  The boys leave a set of clothes at our house so that they can change, which is perfect!

It also works out well because last year Jose and Fernando never ate breakfast before going to school.  This year they can share whatever we have before starting their day.  It's fun! 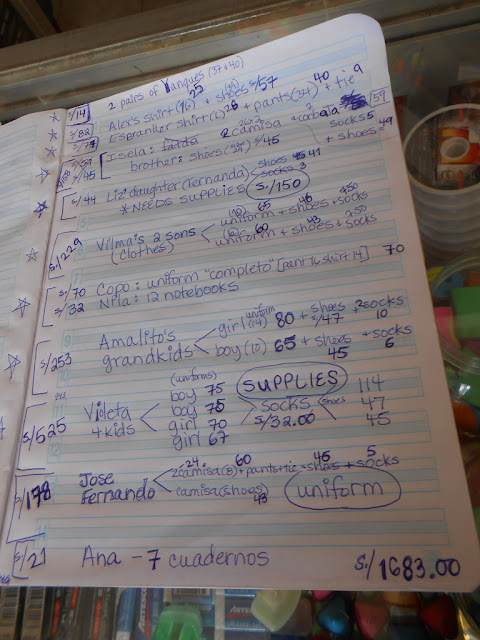 Each kid has a story.  Those stories include the hardships of neglect, hunger, abuse, death of loved ones, and abandonment to name only a few.

Some of these kids have missed years of school here and there due to lack of funds, medical issues in their families or just general neglect by their parents. 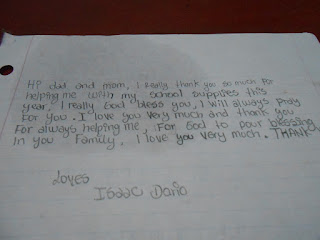 Suffice it to say that the generosity of our supporters has allowed us to help over 30 kids go to school that would have otherwise spent the year at home helping their moms in the house or gone to work with their dads.

Although all of the kids are incredibly thankful, only one is capable of expressing that in English ~ our friend Isaac.  Here is the letter that he wrote:

Please join me in praising the Lord for Amalita, who was the inspiration for this ministry.  Please pray for her continued good health and that the Holy Spirit anoint her as she works tirelessly to serve others.