Corn Strike Affects Everyone! by Chris 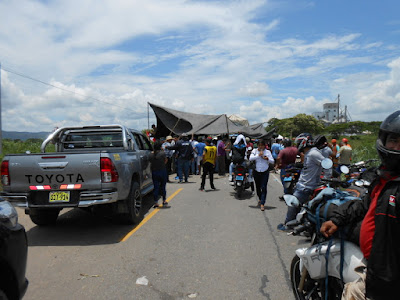 Last month, we had a corn farmer's strike that lasted for about 15 days.  This strike stretched all across Peru where the farmers took to the main highway and at intervals of about every 50 kilometers (about 30 miles) formed a blockade, mainly near the bigger towns.  In our region, it happened to coincide with our medical mission, where the 26 nurses were able to experience what a Peruvian agricultural strike is all about.  It also made getting around very complicated and expensive as all motorcar and taxi prices pretty much doubled during that time.  I want to share some of the backstory from what I learned about it from talking with the farmers at the blockades.  We had some powerful moments to pray and to sing praise and worship with the farmers as well which were very memorable for me. 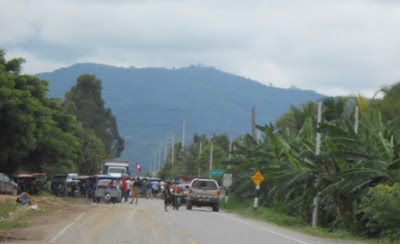 Most of the people that we live around are involved in one form or another of "agricultura" which is castellano for farming.  Over the course of the last few decades, the rather closed market of Peru has been slowly, but surely opening to the global marketplace.  With that comes much good with lower prices for consumers and more selection of quality goods from around the world.  Along with it comes the bottom falling out one-by-one on each agricultural product grown here.  Last year, it was the local product here in San Hilarion, rice, which was the cause of a rather large-scale strike.  In addition to rice, cacao, cafe and many other products have been impacted by the opening of the marketplace here.  In the long run, this will be very good for Peru and for the people but in the short-term, it is causing many farming families to suffer. 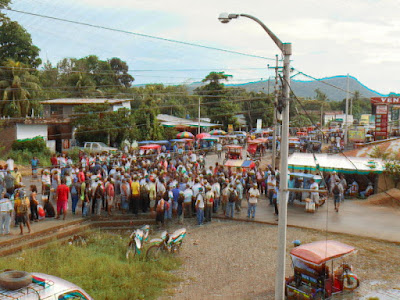 The corn strike started small and grew progressively each day to be larger and more crippling to the local economy (henceforth, more effective).  It was not until the rice farmers joined with the corn farmers in solidarity that the strike really became large enough to draw the attention of the federal government in Lima.  At that point, a representative from the Peruvian equivalent of the U.S. Dept. of Agriculture (USDA) flew in to Tarapoto for negotiations with the leaders of the strike.  All of that took approximately 15 days to take place.

During that time, the local farmers here which are part of farming cooperatives or unions, each had to go and spend all day and night at the local strike location (which were highway blockades) or pay steep fines equivalent to more than one day's wages.  Very few farmers could afford to pay the fine, so most all went.  During this strike, the local economy came grinding to a halt.  All of the workers were not earning wages and there is no strike pay or a strike fund here.  The blockade led to shortages in everything from gasoline, diesel and propane, to food staples and medical supplies. 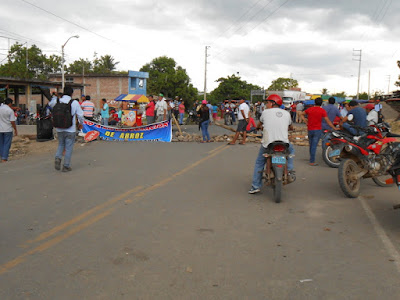 All of this was taking place at the same time when the schools were all starting up after their summer break.  Therefore, very few children were prepared for school on the first day with their uniforms and school supplies.  We helped out many families thanks to the support of our generous benefactors on Team Carmody.  We also had to cross the blockades at various times to perform ministries at which time we stopped to pray with the striking farmers and to sing praise and worship songs with them to raise their spirits.  These opportunities really helped us to bond with them and to feel their pain and suffering.  Please pray that the negotiated resolution of the situation was a fair and just one and that no future strikes would be necessary.