On Good Friday Jesus' passion came alive in the streets of San Hilarion
as Katelyn, Anna and the rest of the youth group presented a thrilling dramatization.

Jesus and His 12 apostles gathered in the plaza for the Last Supper.  They sat talking quietly until the crowd gathered around and seemed ready for the show to begin.

(This is so different than what we experienced in the United States where events such as this always had a designated start time.  Here people just hang out until it seems like a good time to begin. When we first arrived here in Peru two years ago this was a big adjustment, but now we love how laid back everyone is.)

After the Last Supper Jesus and His apostles went to the Mount of Olives.

While Jesus was praying the soldiers came, apprehended Him and lead him away.


When they arrived at the Praetorium the crowd shouted their accusations, demanding that Jesus be crucified.  As one of the accusors, Katelyn did her fair share of shouting. However, each "action" shot I took looked ridiculous, so here she is just watching from afar.


Jesus was led to a  whipping block where the soldiers, including Chris who was invited to participate at the last minute, whipped him and beat him.  Some of the soldiers hit Jesus softly (since it was just a re-enactment after all), but others really let him have it.  The harder the soldiers hit Jesus, the more worked up the crowd got.


It was really intense!

Jesus returned to Pilate for his death sentence.  Amidst the crowd Anna spoke out, demanding that Our Lord be put to death. 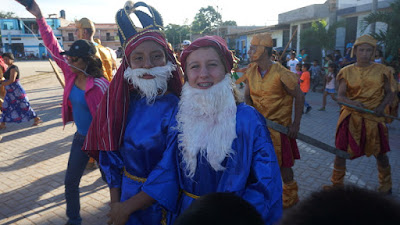 As the assembly left the Praetorium Anna and her friend Evelin stepped out of character for just a moment to smile for the camera.


The crowd looked on as Jesus began his pilgrimage toward Golgotha. 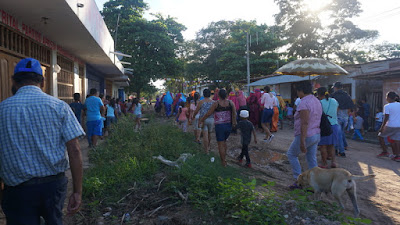 Hundreds of people followed Jesus through the streets of San Hilarion.


Closely behind Jesus were the two criminals. 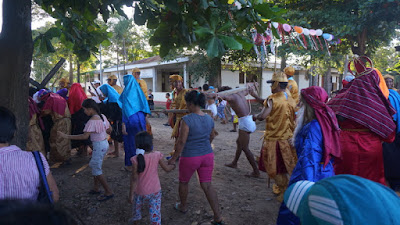 Although I don't believe anybody gave the spectators instructions, they were perfectly on cue.

They yelled at Jesus and the two criminals. They threw rocks and actually hit them.  The spectators kicked Our Lord and his companions, making them fall to the ground.  As they fell, the crowd continued yelling horrible things.  Looking back I realize that I never shouted a thing because I felt really sorry for the people playing the parts of those being tormented.  It was so unlike anything I ever witnessed in the States. 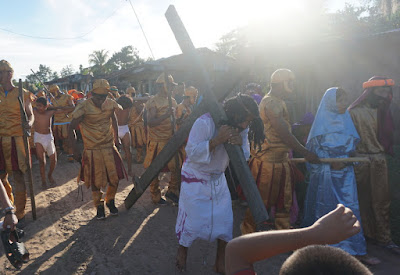 As Jesus was carrying His cross through town the crowd was pressing in on Him, but the soldiers pushed them back with their wooden spears.


According to Michael, "When I tried to get close they whipped me with a catcus on a stick.  They also used this weird bush that has thorns and a leather belt too.  It hurts when they whip you really hard, but it's fun too." 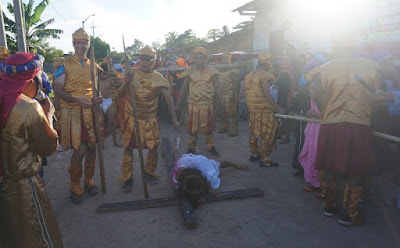 Each time Jesus fell the soldiers yelled and mocked Him.

The spectators laughed and spit.

During the walk the criminals began bleeding from all the abuse.

(Actually, members of the youth group got close and "secretly" squirted fake blood on them, but everyone pretended not to notice.)

The group re-entered the plaza for the final stretch of the walk to Golgotha.

When they arrived at the raised platform the soldiers tied Jesus to the cross (while the cast members 'secretly squirted fake blood on his hands, down his arms and all over his feet).

The intensity of the crowd had continued to grow, which made the whole thing so surreal.

Here is a video of the soldiers raising Jesus on the cross:

As Jesus hung on the cross the crowd went wild.  Some wailed in agony while others screamed curses.


It was as if every spectator was following a script, although I knew this wasn't the case.  I was amazed at how active the crowd had been throughout the entire presentation.  Their involvement reminded me of the Rocky Horror Picture Shows that I attended so many years ago.

After Jesus had been "crucified" a narrator read the final part of the passion whereby the veil of the sanctuary is torn in two from the top to bottom.  He spoke about the earth shaking, tombs opening and the bodies of many saints being raised.  When the narrator finished he asked for a moment of silence so we could contemplate the sacrifice Jesus made for us.


I was pleasantly surprised that the unruly crowd who had been yelling for hours fell silent and bowed their heads in total respect for Our Lord and Savior. Had I not been lost in my own prayers it might have occurred to me to sneak a photo...but I was and so I didn't.

The narrator concluded by asking the hundreds of attendees to put their hands together for the "missionaries who made this whole day possible".  Totally caught off guard, my cheeks reddened as everyone turned our way, clapping and cheering. "Why the embarrassment?" Because I was fully aware that we weren't the ones that deserved the applause.  It was Team Carmody that they were cheering for.  It was Team Carmody that had made the day possible through their many sacrifices, but there was no opportunity to explain that.  Unsure what else to do, we simply smiled and extended our arms toward the youth group who had done such an amazing job.  As I clapped and yelled I realized how proud I was of Anna and Katelyn, not just for a great performance, but for the countless hours of evangelization that inspired this group to come together for such a noble task.  They are truly amazing missionaries!!!