A New Ministry at the Boys' Orphanage 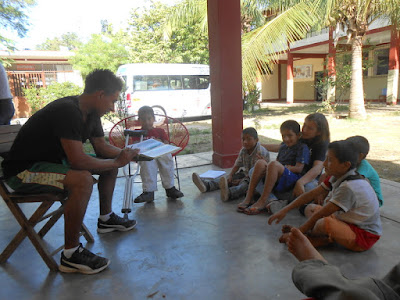 There are so many aspects of missionary life that rival for our favorite.  One contender for first place is when we get to share bible stories that we know folks are hearing for the first time. When we went to visit the orphanage in Bellavista we asked the kids if they had ever heard the story of Jesus raising Lazarus from the dead.  They all shook their heads back and forth as they scooted closer to hear.

They were perfectly attentive and all clapped when they learned how the story ended.  It was exciting.

This time was really special for Javier as well. Knowing that he is a weak reader, he has never volunteered to read in front of a group. Historically, when teachers called on him to read in class he misbehaved, hoping to get kicked out, to avoid humiliation. Today was different.  Despite his limited abilities, Javier eagerly read to the kids and they were really blessed by his enthusiasm. 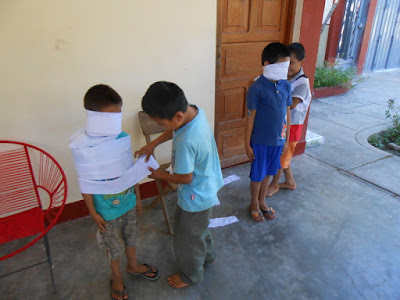 After discussing the story the kids brought it to life.  They wrapped each other in toilet paper so that they looked like Lazarus. 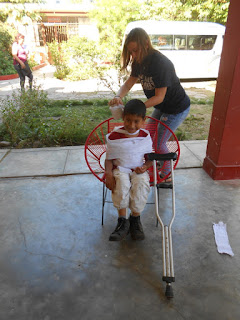 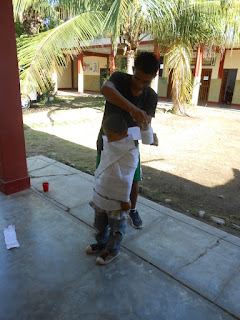 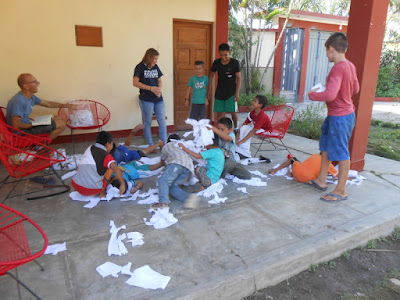 Javier played the role of Jesus. As he blessed each mummy, the kid broke out of his wraps and ran around praising Jesus.

When they returned to the patio they all started wrestling and throwing toilet paper at each other.  I think their laughter was heard for miles around.


When they were done we picked up every last piece of toilet paper and put it in bags so the kids could use it in the bathroom instead of the old school papers that they typically use. 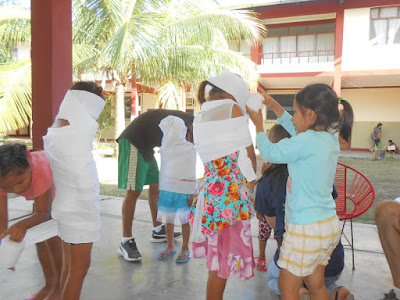 When the boys finished the activity was repeated with the girls. They too listened intently to the story and then wrapped each other like Lazarus. 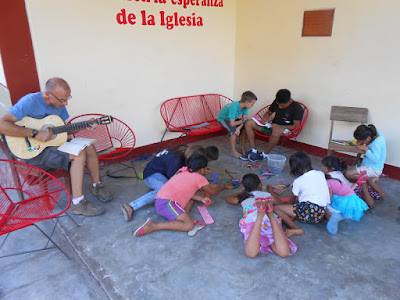 Next, they all made signs to be hung next tho their beds that read, "Jesus me ama!"
(which means Jesus loves me!)

While the kids were working, Chris blessed us with pretty praise and worship music. 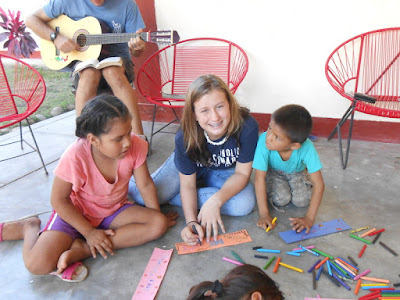 The kids were amazed at how well Anna can draw.  They kept staring at her with intense curiosity and asking "Why can you draw so pretty?" Anna just giggled and said, "Come on, let's make your sign."  She is so humble and always feels uncomfortable when people compliment her. 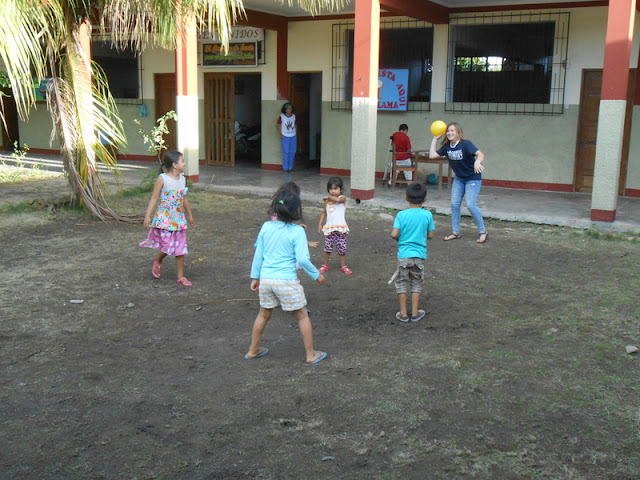 Next on the agenda was "Sin Ball".  When Anna and Javier hit someone with the ball, which represented sin, they had to come to me for "confession." 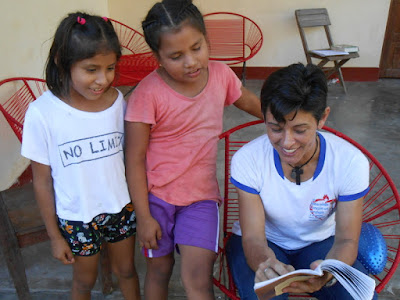 After we read the Act of Contrition together they re-entered the game.

I was so happy to see that after many trips to "confession" several of the kids had the prayer memorized.

It's incredible how quickly kids learn when they're having fun. 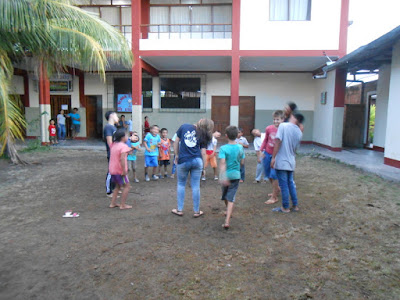 "Dynamicas" are an all-time favorite. Everyone always enjoys dancing around doing silly moves and gestures while singing to Our Lord. Anna has learned a ton of them and has a gift for picking the ones that are most appropriate for a given situation. 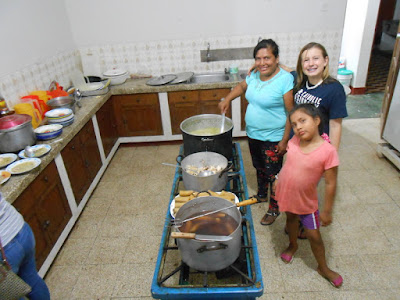 Javier's mom, Maria, prepared a delicious meal for dinner. The kids were super excited to have something other than rice and yucca, which is their standard fare.

While the kids were eating I asked them if they could see "love".  They were a little confused, thought a bunch and eventually said, "no".

"What if I told you that this food is an example of LOVE?"  They just giggled. 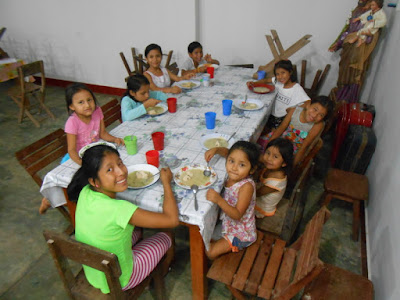 I explained that the food before them was a physical sign of the invisible love that our friends in the United States have for them.

I continued by describing our mission and the importance of Team Carmody. I explained that the money we have is not ours. Our job is simply to guard our friends' money until we find people that need help.  "Do you guys need help?" I asked.  "Yes!" they shouted in unison.  "And so, I used my friends' money to help you.  Isn't that wonderful?"  I asked.  They all shook their heads up and down as they gobbled up their dinner.  I'm not certain they grasped my profound message of universal love, but I'll rest assured that a seed was planted.  Little by little I believe they'll understand the real power that Christ has to move mountains with the helping hands of the faithful. 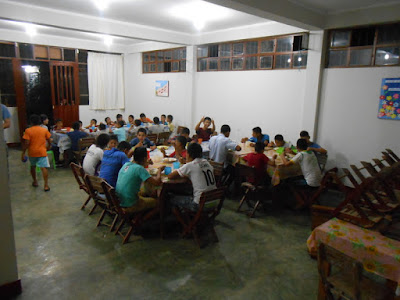 After the girls were done eating it was the boys' turn.  I was told that during dinner they're usually very social.  However, tonight they were too excited to eat Maria's scrumptious meal. I  could have heard a pin drop. 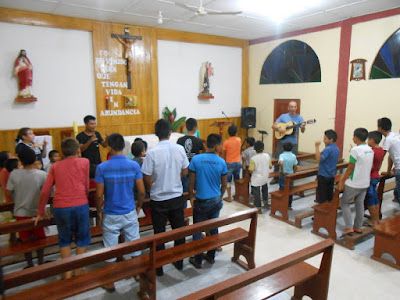 After dinner Chris, Javier and Anna led the group in praise and worship. 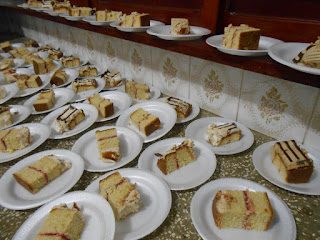 As a super-duper special treat we brought cake. They kids were in heaven. It was interesting to watch how each kid enjoyed their cake.  Some gobbled it down in an instant while others took little tiny bites to make it last longer. 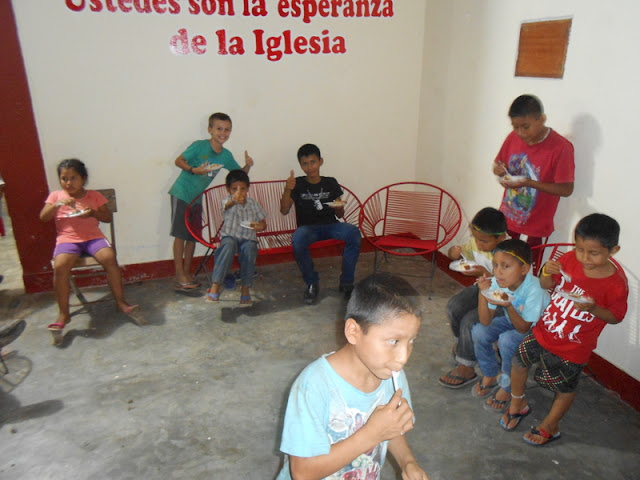 Our time at the orphanage was incredibly blessed.  When it was time to leave we generously gave away hugs and promised to return another day.... which we have.

The following week we planned to go to the orphanage, but couldn't because of other obligations that arose unexpectedly.  To our surprise and delight, our Precious Sheep came to the rescue.  Isaac, Javier, Jherson, Ivan, Esbranller and their friend Alexander went to the orphanage on their own and put on a fun program for the kids.  It was incredible and the kids at the orphanage couldn't wait for them to return.  As I considered their decision to go alone it occured to me that these young men are truly becoming disciples of Our Lord Jesus Christ.

A couple weeks later Anna and I taught the kids the story of the Good Samaritan and had them act it out.  It was especially funny to watch the Good Samaritan lay the victim onto the kid crawling along as a donkey on their way to the inn. 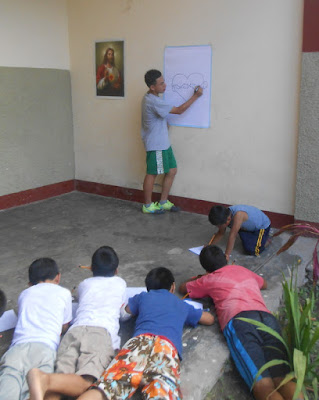 Just a couple days ago I visited the orphanage with Javier, Jherson and Ivan.  Our theme was "I want to have a heart like Jesus". Jherson started with a drawing lesson. Step-by-step he showed the kids how to draw the Sacred Heart of Jesus.  He is incredibly patient and has a gift for explaining things in a simple and loving way. 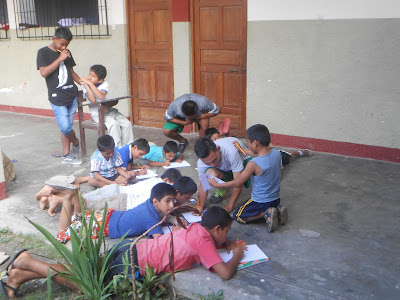 While Jherson was explaining each step, Javier and Ivan circulated through the group offering help to whoever needed it. 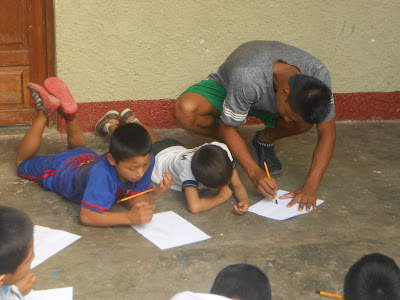 There is a beautiful  "big brother" type relationship forming which obviously blesses them all.


After the drawing lesson they played a game whereby the kids needed to help each other make it around a course. During the first round one partner was blind-folded. His partner needed to be his eyes and guide him carefully as not to put him in harms way.  During the next round the kids' arms and legs were bound and their partners needed to help them hobble along. 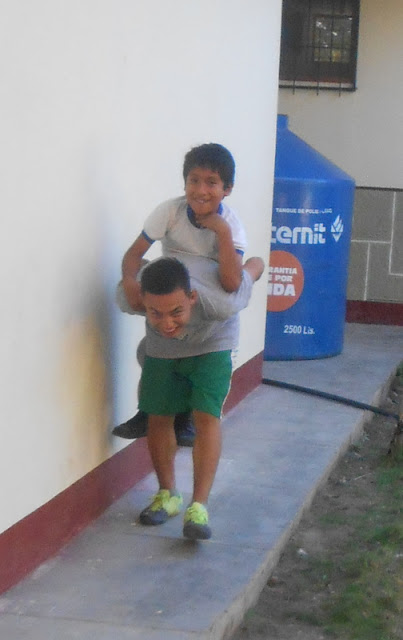 Jherson was delighted to have Segundo as his partner.  When it was their turn he lifted Segundo onto his back and ran around the course.  Segundo giggled the whole time.  Due to the malformation of Segundo's leg others often need to help him get around; however, it's never as fun as it was with Jherson!

After the game was over we all sat in a circle and talked about what it means to have a heart like Jesus.  The kids gave examples, from their own lives, of how they can help others despite their age and limited resources.  I was most encouraged by their conviction that praying for others is hands-down the most important thing we can do.

I'm heading to the orphanage again tomorrow and can't wait to see the kids....all of them, big and small....share the love that Jesus has put in their hearts.  I'll be especially blessed if the story that we have for them is one they've never heard.

I ask for prayers as we continue to preach the gospel and serve the poor in this beautiful jungle community of Peru....one kid at a time!

We'd love to hear from you via email: carmodyfamilyonmissions@gmail.com