Dave Ramsey is Alive in the Jungle 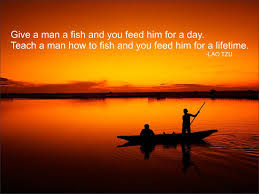 When I encountered Javier, Jherson and Ivan they were really hungry, metaphorically speaking, for every good thing in life because destitution and poverty is all they had ever known.

Although I know it best to "teach a man to fish", I couldn't deny the reality of their immediate hunger...not just for food, but for the little things that so many of us take for granted: a cold drink on a hot day or a new pair of sandals when our old, warn-out ones finally break.  So, I fed them and they ate like starving animals. I desired to teach them to fish, but saw clearly that they weren't ready to learn.  They had been hungry for so long that they could only relish in the banquet before them. Surely their insatiable appetites would pass as they gained confidence in our friendship.  I trusted that eventually they would want to learn how to fish. I knew I couldn't feed them forever, nor did I desire that.  I just had to be patient and trust in God's perfect timing. 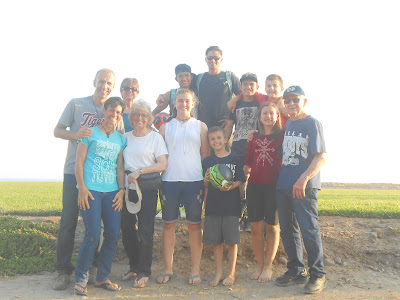 A few months ago Javier and Jherson went to Lima with our family to visit my parents, but they left before us.  Prior to their departure I sat down with them to discuss their upcoming expenses: groceries, gas, school fees, drinking water, rent, hygiene products, etc..  We made envelopes for the categories of expenses and discussed the importance of self-control. Fully aware that they had NEVER managed money before, I talked with them about the real temptations that would arise to take "a little here and a little there" for whatever random thing they might want. They understood that there was sufficient funds for their family's necessities, plus a little extra in the "Extra" envelope for treats and special activities.  If, for example, they took money out of the "Groceries" envelope for pop and gum they wouldn't have enough to feed their family.  They seemed to understand. 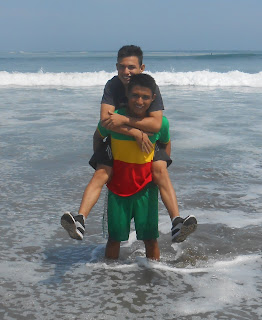 At that point Ivan, Javier and Jherson had been drug-free for three weeks.  They had gotten past the difficulties of withdrawal and reported feeling healthier and happier than they ever had!  As I hugged them good-bye in the airport I reminded them of how good they felt and encouraged them to resist any temptations that might arise to slip back into their own ways.  They assured me of their desires to stay clean and told me not to worry.  However, temptation got the best of them.  The same day they returned home they took money out of the "Extra" envelope and bought drugs, not just enough for the evening, but for the next morning too.  For the first time in six months they got high before going to school.  They smoked again that night and the following night too.  All the money in the "Extra" envelope was gone, so they pulled "a little here and a little there" (exactly like I told them NOT to do) to buy beer and go to the motocross race. Unsurprisingly, they ran out of money before we returned home.  When I went to check on them the envelopes were empty, they were hungry and ashamed. Although I felt disappointed by their decisions I didn't fret too much because I knew that "the school of hard knocks" is an excellent teacher.  I simply said, "So, tell me how the envelope system worked."  Their heads dropped immediately and there was silence.  I waited patiently for them to find the courage to tell me the truth. Through tears of sadness and embarrassment they admitted that the temptations were too great.  They wanted to do what was right, but couldn't.  They apologized a thousand times over again and said that they would understand if I never trusted them with money again.  I assured them that they would learn.  I told them that people all over the world have trouble managing money.  I explained the concept of debt and told them that even people with a lot of money fall into the temptation of buying things they shouldn't.  Their tears started flowing all over again as they thanked me and gave me great big hugs. 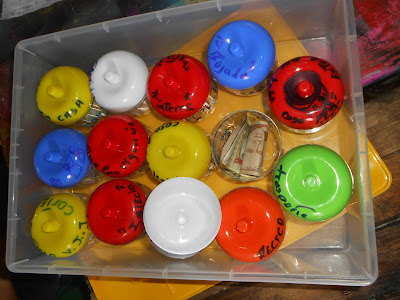 I knew we needed to alter our approach a bit, but how?  I asked the Holy Spirit to guide me as I ventured to the market to find the solution.

There were little plastic jars that fit perfectly into a larger plastic container - could this be it?  This would allow them to see at a glance the various categories and available funds.  Chris went to the bank to get smaller bills so we'd have exact change for each jar.  We bought a little record keeping book and headed for their house. 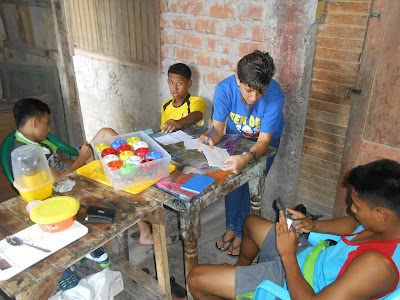 Jherson, Ivan and Javier laughed at the childish appearance of my "system", but finally admitted it was fun.  As we worked together to identify each category Jherson labeled the corresponding jars and lids.  Javier wrote notes about what each category included along with the budgeted amount for a week. We taught the concept of carrying money over from one week to the next to amass the needed amount for things like haircuts, which they can only get once a month.  We designated a jar for "fun" which includes things like guitar strings and new paint.  All of this is totally foreign to them.  They've never had the money they've needed for life's necessities like food and clean drinking water, much less for haircuts and paint supplies.  They feel super spoiled and constantly thank us for our willingness to use Team Carmody's funds for them. 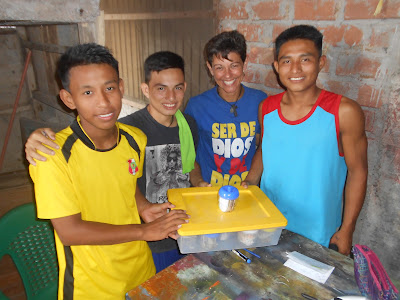 Since our initial "training session" whereby we filled the jars, I've met with them three times. They are truly embracing the system and have shown the discipline needed to live within a budget.  We record how much was spent each week as well as how much is left in each category.  I'm happy to report that there has been a significant amount of money left over at the end of each week.  As we discuss their expenditures they proudly recount the sacrifices they've made to live within the system.  Just the last time I met with them they were super eager to share this story:  There is an elderly man that they often see in the plaza.  He is sickly looking and always sits alone.  The last time they saw him they asked if they could buy him dinner.  He happily accepted.  The guys rode their bikes home to get money.  At first they planned to take funds from the "Almsgiving" jar, as would have been appropriate, but they wanted to use that money to buy pop and snacks for the kids at the orphanage during their next visit.  So, instead, they took money out of their "Grocery" jar and agreed that they could eat a little less.  They said that it was a miracle because somehow their mom had made perfectly filling meals all week and there was still money leftover in the "Grocery" jar.  "It's like God put extra money in that jar just to thank us for being generous." Ivan said.  As I giggled tears streamed down my cheeks. What I wanted to say was, "I'm so excited that you're learning how to fish."  However, I knew that wouldn't mean anything to them.  So, I gave each of them a great big hug and simply said, "You guys are incredible!"


Metaphorically speaking, I'm thrilled that their appetites have been satiated, that their ravenous hunger has passed and they've found a peaceful way to exist outside of destitution.  If ever the philosopher, Lao Tzu, and the personal money-management expert, Dave Ramsey, could have met I believe they would have sanctioned our plastic jar system and agreed that it is doing wonders to teach my Peruvian sons how to be happy, debt-free fishermen.