Throughout the years I've seen life as a never-ending balancing act.
...a little more of this...a little less of that.... 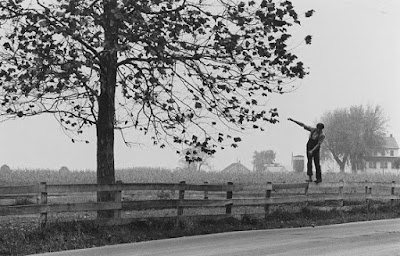 Although it's hard to achieve that balance that I so desperately long for, I've found that I'm most successful when I set my site on Christ and allow myself to be guided by His perfect instructions. This pursuit is an integral part of my personal journey, but it's a real component of missions as well.

In the bible there are two messages, which appear to the untrained eye as conflicting ideas:

In the book of James, St. Paul says, "If a brother has nothing to wear and no food for the day and one of you says to him, 'Go in peace, keep warm and eat well,' but you do not give him the necessities of the body, what good is it?"

This great saint preaches the undeniable truth that we're expected to share our resources with those lacking the basic necessities of life.

The bible also says that Jesus is all that people really need. After all, He is the way, the truth and the life!

In the book of Revelations we read, "For you say, 'I'm rich, and affluent and have no need of anything.' and yet do not realize that you are wretched, pitiable, poor, blind and naked.'  Behold, I stand at the door and knock.  If anyone hears my voice and opens the door then I will enter his house and dine with him, and he with me. I will give the victor the right to sit with me on my throne, as I myself first won the victory and sit with my Father on his throne."

Clearly, physical comfort is not needed to obtain the goal of eternal life with Christ....and yet, St. Paul made it SO clear that we are to do our best to alleviate the sufferings of others.  How can we do both? We constantly ask Jesus questions like, "Do we spend this money on the gas needed to drive to the distant village to bring them the Good News OR do we buy food for the kids down the street that haven't eaten in days?"

When we arrived in Peru we were overwhelmed by the appearance of destitution. However, we quickly became accustomed to the lower standard of living and soon thought nothing of people living in dirt houses without running water.  As we got to know the people we realized that most of them usually had what they needed to survive. 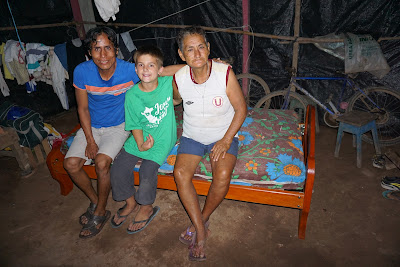 Loyda was always an exception. She never had food, wore the same clothes for days and slept on the dirt floor alongside whichever adult children happened to be staying with her at the time.


When we visited we brought the basics that she lacked: food, soap, medicine.  Upon arriving we'd set the bags off to the side and invite her to join us in prayer.  She'd politely comply, but her thoughts were clearly inside the bags that were patiently waiting for us to leave.  It became obvious that Loyda wasn't going to be able to hear the message of Jesus' love until her stomach stopped grumbling and she was able to get a decent night's sleep.  We continued bringing Loyda's family food and also had the carpenter make them a bed.  You can read more about this in our blog post "Mama, Mama, a Cama!" During our subsequent visits she was more attentive and enjoyed listening to whatever we had to share. We invited Loyda to church, but she refused to enter dressed in the rags that comprised her wardrobe.  Thanks to the amazing contributions of Team Carmody, Loyda now has a couple bras, some pretty blouses and two full-length skirts, which she happily wears to our services and various activities.

Each month when we draw our stipend from FMC we find ourselves back up on the fence, trying to find that place of balance whereby we can address both the spiritual and physical needs of those the Lord has called us to serve.  Several times these last 2½ years we desperately desired to build Loyda a house comparable to the others in the community, but could never justify using such a disproportionate amount of funds to "simply alleviate her physical discomfort".  We gave our concerns to the Lord and decided that if He desired for Loyda's situation to change then He would provide us with the resources we needed..


...which He did through the short-term missionaries that visited us in June.

When people participate in short-term mission trips with FMC a portion of their fee pays for food, lodging and other essentials.  Another portion is used to cover the expenses associated with the work projects that will be completed by the group.  It was these funds that made it possible to build Loyda a new house.

Following is a collection of photos which show the incredible work done by the short-term missionaries, our friends that visited from the United States shortly after the FMC missionaries left, as well as folks from the community who pitched in to help get the job done.  We praise and thank God for providing us the means to "give [Loyda] the necessities of the body", as St. Paul so clearly instructed us to do.  We pray that in addition to the physical aid we've been able to provide, that we've also helped this family to draw closer to the Lord. 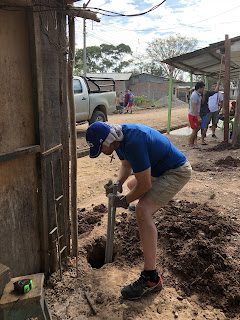 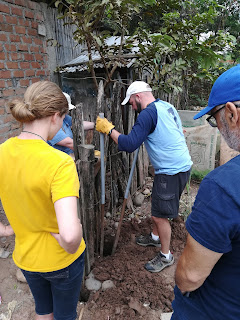 Digging the holes for the support posts was a difficult task given the rock hard, clay ground. 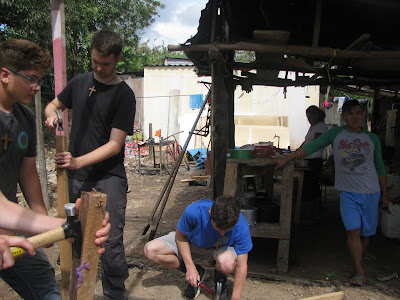 The wood that we used to build Loyda's house was harvested from the jungle just days before.  It is incredibly dense and super, duper heavy! 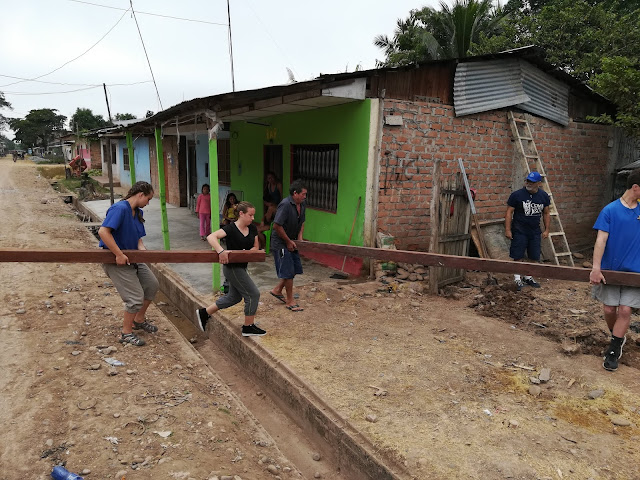 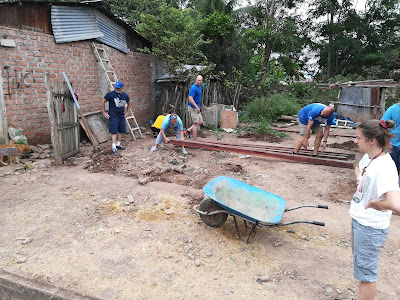 Following the carpenter's instructions the team notched the tops of all the support beams with machetes so that they would be ready for the cross members which would soon support the roof. 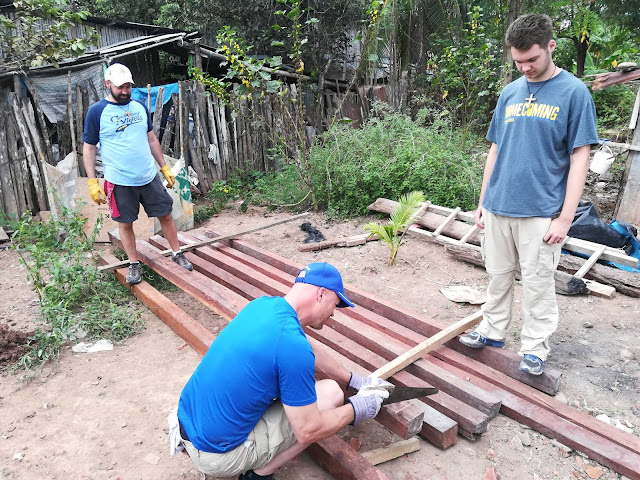 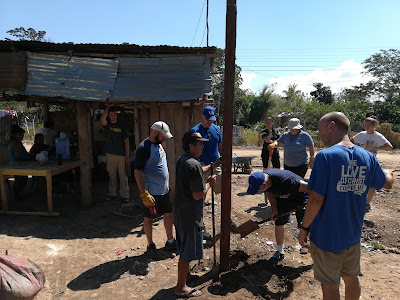 Everyone was really excited when it was finally time to put the supports in the ground.

After lots and lots of work it was finally taking the shape of a house! 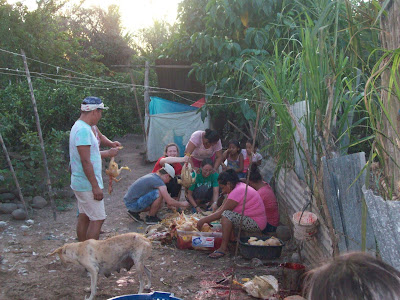 When there weren't enough building tasks to keep everyone busy, the missionaries took a break and killed a few dozen chickens for the big lunch we would all have the next day. 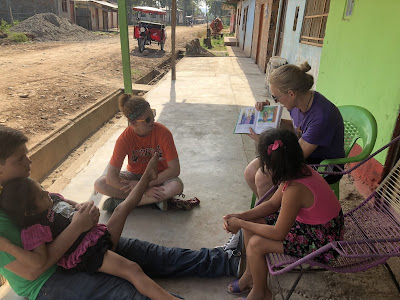 They also took some breaks to read bible stories to the neighborhood kids. 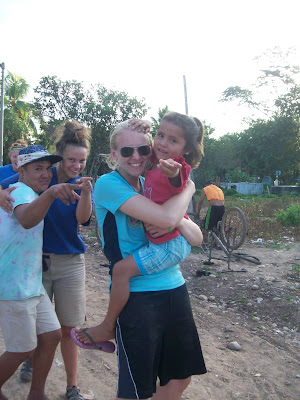 The short-term missionaries really connected with Loyda, her family and neighbors.  Their joy radiated from the depths of their hearts in a tangible way and left an impression on our community that will never be forgotten! 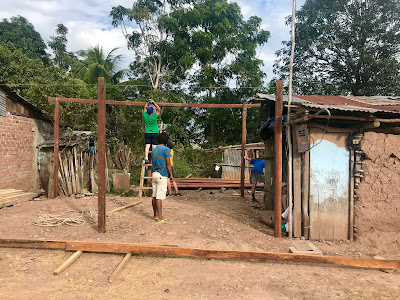 After the posts were all in place the team began putting up the cross-members for the roof. 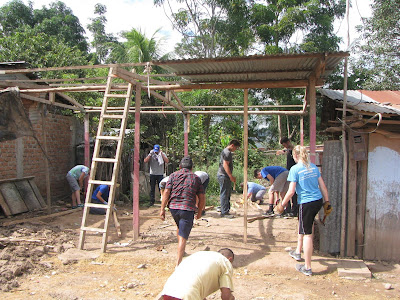 With roof panels we could just about imagine what Loyda's house would look like.

With each additional step it felt more and more exciting! 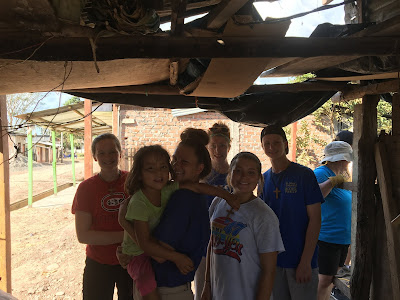 I thank God for each and every short-term missionary that selflessly gave so much to bring the love of Jesus to our village! 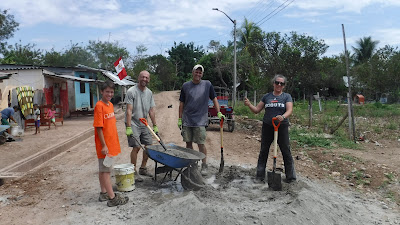 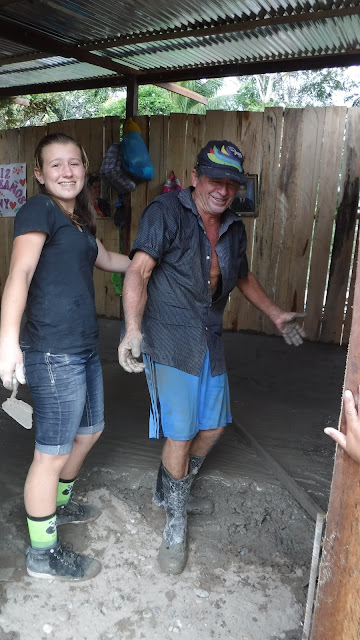 In addition to all the volunteers that helped to make Loyda's house possible, we also had the priceless gift of Pablo, our carpenter friend who constantly instructed us on "how it's done in the jungle".

Anna will forever remember the first cement floor that she poured.  Hopefully it won't be her last!

Although Loyda doesn't claim to know how many kids she has due to the high number that have died over the years of illnesses and accidents, she does know that she has five that live in San Hilarion.  Here in this picture we can see Loyda in the middle with her daughter Neli on her left, her son Leoncio on her right and her son Edrulfo in front.  They are all so, so happy to finally have a real place to call home! 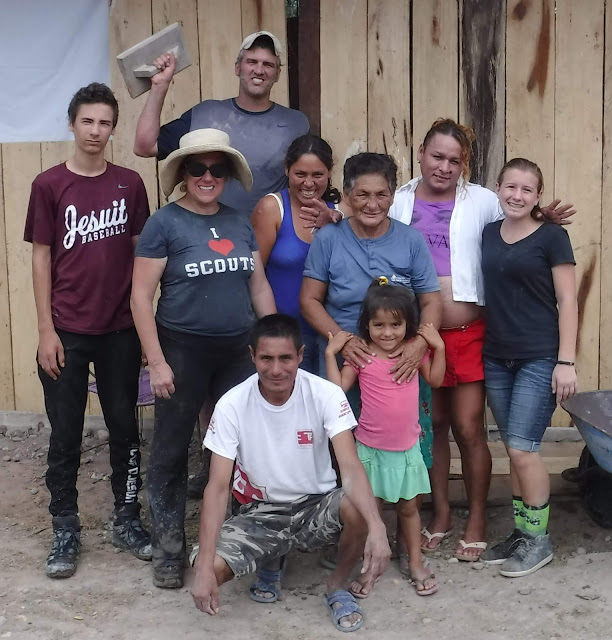 After all the commotion of the construction project died down Loyda and her son Ronel moved their belongings into their new home.... including the bed that we gave them long ago! 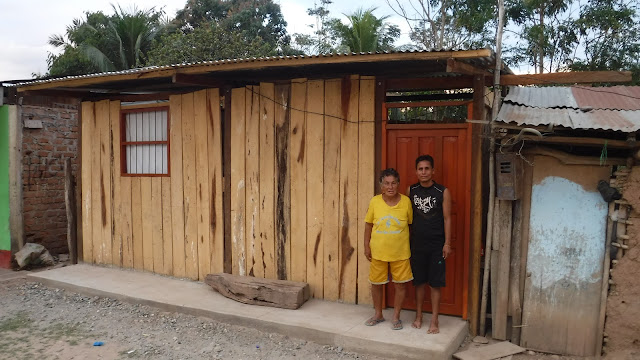 We thank you for journeying with us and ask for your prayers as we constantly seek to find that balance, whereby we're helping those in greatest need - both physically and spiritually!

If the Holy Spirit in nudging you to support us financially so that we can continue serving those that the Lord calls us to serve, please visit either: