Our Welcoming Mass in Mikinduri, Kenya

In 2015, when Jesus called our family to missions we left our material possessions behind.  Although there were moments of fear and doubt, we trusted that the Lord would provide all that we would need in whichever place He called us to - and He has!!  Most recently, we've been awestruck by the way that the Holy Spirit has worked through the faith-filled parishioners of St. Massimo Catholic Church here in Mikinduri.  When we arrived in Kenya, Father Bernard excitedly assured us that his parish would take very good care of us. 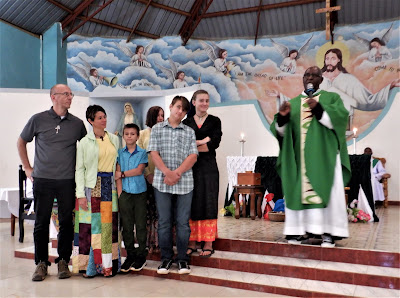 A few days after our arrival, following Holy Mass, Father Bernard invited us to the front of the church so that he could introduce us to his parish community.  He also wanted us to see the people who had donated some of the money which was used to build the house we're living in. He began in English but quickly switched to Kimeru, the tribal language of Meru, so that everyone could understand.... everyone except for us, that is.  I haven't a clue what Father said, but I assume it was beautiful because the people's eyes twinkled in a very special way. 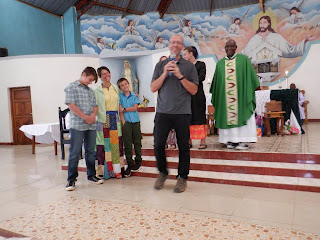 Fr. B asked Chris. to say a few words.  After introducing our family and sharing a little bit about our life as missionaries, Chris cracked a couple of jokes, which got everyone laughing.  It was awesome!  Immediately they saw that we're "just regular people," like them.  I felt totally calm....

"They want to hear the mother's voice, Karen.  Please speak to them," he said as he handed me the microphone. 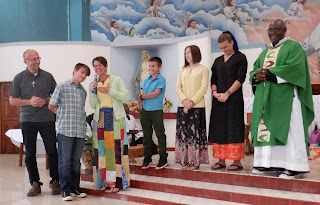 As I looked out at the sea of smiles I began to cry...before I even said a word.  I briefly explained the apprehension we felt to give everything away back in 2015.  I told them that although Jesus promised us that He'd always provide us with what we needed, at times it is hard not to doubt or be scared.  I continued, through my embarrassingly drippy sniffles, to proclaim that Jesus' promise had been fulfilled in each and every one of them that day. They all clapped and cheered, which just made me cry even more.  I explained that we had been praying for them for several months and so it was so exciting to finally see them - in person!!  I finished by thanking them for all they had done for us but had no idea that there was more to come. 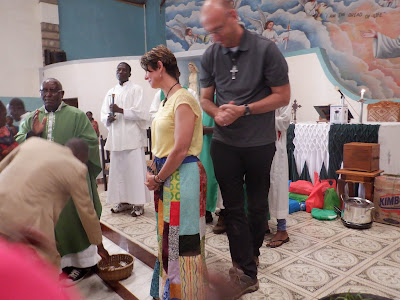 Fr. B asked Chris and me to stand together on the altar to receive the gifts the people had for us. We weren't sure what this meant, but assumed our positions, like Father asked.  Within moments it seemed like every parishioner stood up and got in line.  One by one they approached us and either handed us a household item or dropped a cash donation in a basket on the floor.  They shook our hands very firmly and welcomed us as friends to their community. 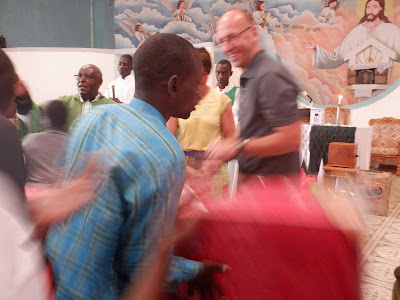 Some of the donated items included: mattresses and bed sheets, bags of flour and ugali mix, wooden cooking spoons, eggs from their chickens and beans from their farms.  It was the most humbling experience I've ever had in my life.  I don't know a lot about the people here yet, but I know enough to know that they have given to us out of their need, not their excess...which is SO, SO, SO hard to accept.  After the TREMENDOUS display of generosity, the people returned to their seats.

Fr. B stated our plans to attend language school in Nairobi to learn Swahili and said that we even hope to learn Kimeru, which the folks here claim is easier than Swahili.  When the people's eyes widened and they began to cheer, Fr. B turned to us and explained that they were surprised and honored because most visiting white people don't try very hard to learn their language.  Some, he said, learn a little bit of Swahili, but none learn Kimeru.

He re-introduced Katelyn and Anna and said that they had a very special surprise.

When the girls started singing the Our Father in Swahili, the church became silent and people's mouths literally dropped open.  They later told us that they were amazed at how perfect the girls' pronunciation was and how beautiful their voices are. I continued to cry.... surprise, surprise!!

When the girls finished, every person in the church stood up to cheer - really loud.  It was something that I'll remember for the rest of my life!!


Father Bernard invited the children up to the altar to get the donated items so that they could help us carry everything to our new home.  Here's Anna completely surrounded by the love of our new friends! 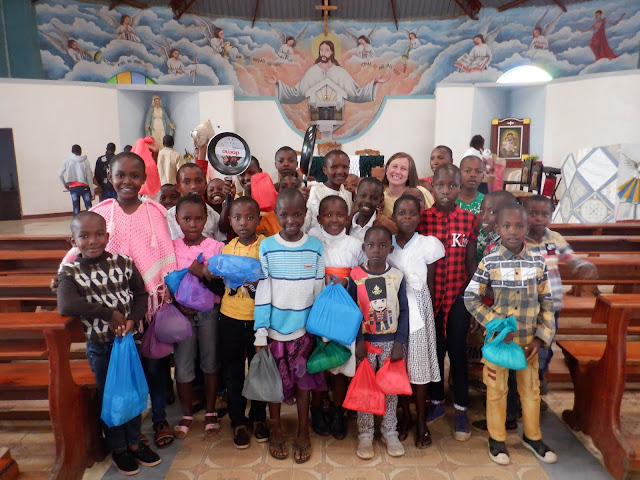 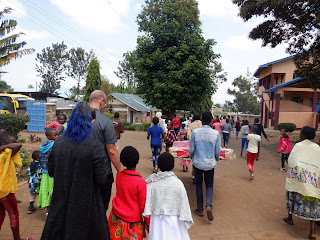 After everyone was dismissed, the entire congregation walked with us to our home, which is located inside of the St. Massimo compound.

(Chris will be publishing a blog soon which tells about the compound.)


The boys were eager to make friends with Jack and were happy to help him carry the mattresses and tables. 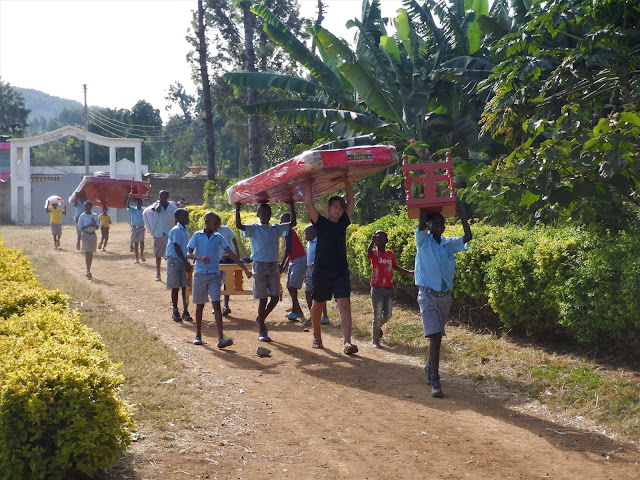 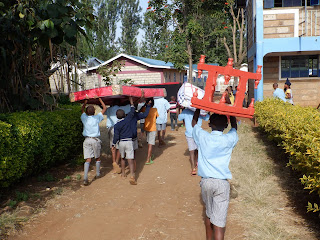 I'm not sure who coined the phrase, "Many hands make light the work", but we saw this in action.


When the kids got to our home they were allowed to go in to look around, which was super exciting for them because they hadn't been allowed to enter during the construction. 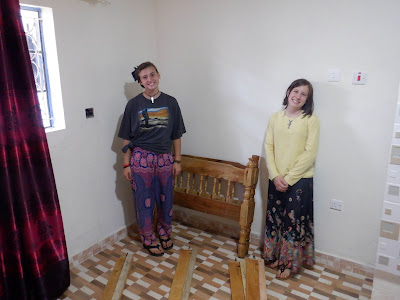 After the kids left we began putting the beds together. 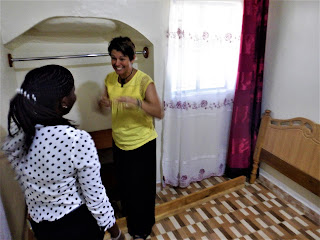 As you may know, one of my greatest struggles in Peru was the isolation I felt during our first year as I learned the language.  When a funny thought or story came to my mind I just clamed-up and wallowed in my own sadness because I knew I couldn't explain myself and I felt like I was never going to make any real friends.

It is truly a blessing that there are people here in our compound that speak English!!!  Although I am committed to learning Swahili so that I can communicate with the less educated, general population, it's a HUGE relief to be able to talk with people from the get-go.  I have been telling funny stories and sharing my feelings.  I ask people questions and we've been talking about real issues. It's AMAZING because we've only been here for about 10 days and all of us feel like we're already making friends.

Before arriving, we had NO idea what life here would be like and we tried really hard not to have any expectations.  We praise and thank God that everything has been so wonderful so far.  The people here at St. Massimo have gone above and beyond to make us feel welcome and Father Bernard has worked hard to make us comfortable, as he promised.  We ask for your continued prayers as we continue to get adjusted.