We Arrived in Kenya - AT LAST!!

In one translation of Psalm 33:10 we're told that the Lord frustrates the plans of the nations. In another, it says that He foils the plans of the people.  So, what's the point of making plans if they're just going to be disrupted?

I hold firm to the belief that it's necessary to have a plan, especially when preparing to leave the country for 3 years with 4 kids.  However, I've accepted the reality that those plans sometimes usually change.

On July 6th, after 3½ weeks on the road, we arrived in Louisiana with a plan:

Doesn't that sound like a good plan?  We thought so!  If only we had known a bit more about what was happening in the natural world, we could have planned things differently.

On Wednesday we learned that Hurricane Barry was making its way toward the Gulf of Mexico and was expected to hit Lousiana Saturday afternoon.

Obviously, there would be no Confirmation on Sunday. I felt disappointed but Katelyn told me not to worry because surely God would understand! 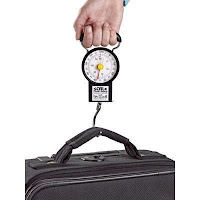 I turned my attention to the piles neatly stacked throughout our trailer and began solving the packing puzzle.  Each piece of luggage needed to be filled to capacity with exactly 50 pounds of life's essentials.  Achieving the perfect combination of light/heavy, big/small, fragile/durable items was made more complicated by the fact that Katelyn, Anna, and Jack had a bunch of their stuff with them at camp.  Speaking of which, when was I supposed to launder and pack their stinky camp clothes?  ???  Ugghhh! 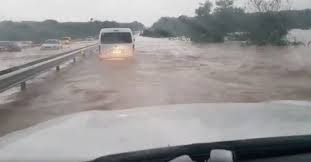 As the storm got closer, the likelihood of mass destruction seemed negligible, but the possibility of severe flooding, which would make the route between FMC and the Houston airport impassable, seemed highly likely.  We were considering our options when the camp leaders announced that everyone would be sent home on Thursday night.  Around the same time, we received news that those living in the vicinity of FMC's campus were advised to evacuate to avoid being stranded in their homes without power for an unpredictable amount of time. So, instead of leaving Louisiana on Monday evening, like we planned, we would be leaving Friday morning. 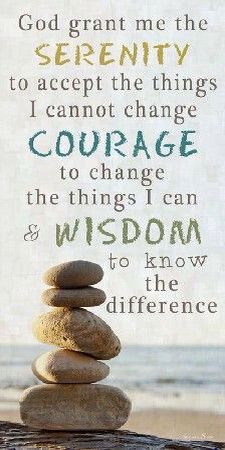 Many people have told me that they find great comfort in the well-known Serenity Prayer by Reinhold Neibuhr. I suppose that if I only read the first stanza it might help me to feel better:

However, reflecting on Neibuhr's entire poem can be uncomfortably challenging because it reminds me that it is not enough to simply accept life's hardships; rather, I should embrace them and be thankful for the difficult times:

"..living one day at a time; enjoying one moment at a time; accepting hardships as the pathway to peace; taking as He did, this sinful world as it is, not as I would have it; trusting that He will make all things right if I surrender to His will; so that I may be reasonably happy in this life and supremely happy with Him forever and ever in the next. Amen." 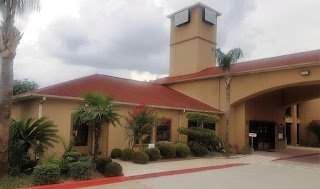 On Friday, July 12th we left FMC and headed west in hopes of beating the storm.  At first, the drive was so uneventful that we questioned our frantic departure.  However, a couple hours later the sky blackened and the torrential rains almost prevented us from continuing on. Thanks be to God we arrived at the Red Roof Inn safely.

"What are we going to do here for four days? all the kids asked in unison.  "I don't know, but it's going to be great!" we responded. And it was!!

Our unexpected stay near the Houston airport was exactly what we needed: time as a family to relax, regroup, pray and discuss how everyone was feeling.  Without any external pressures and with the luxury of time, our kids were able to really open up.  We reflected on our last few months in the United States, resolved any outstanding issues, and talked about our arrival in Kenya and what we might expect in the weeks ahead. 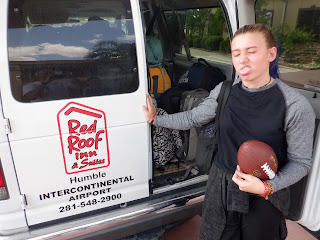 Although packing our stuff into yet another vehicle was the last thing any of us wanted to do, we couldn't deny the building excitement to finally be on our way to Kenya!! 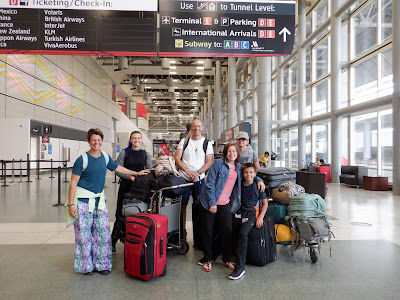 After arriving at the airport we settled in for a brief 5½ hour wait. We passed the time chatting with others and playing cards. 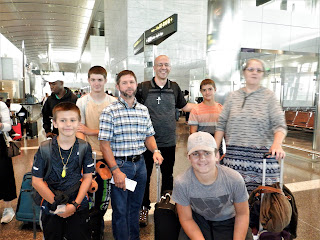 When we were waiting we happened to meet another family of missionaries who had served in Meru, Kenya for 3 years.

What are the chances???

They were incredibly patient as we bombarded them with questions and lovingly provided us with the information we had been so desperately longing for. 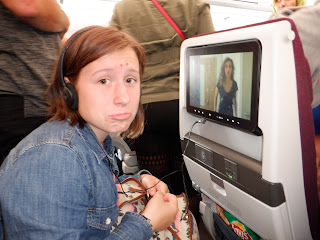 The first leg of our flight, from Houston to Doha, Saudi Arabia, was about 14 hours.

When we landed all of the other passengers jumped up and prepared to leave the plane.  Anna, however, remained seated and asked if there was any way she could finish her movie while they were cleaning the aircraft for the next flight.  If that's not a plug for the movie 5 Feet Apart I don't know what is. 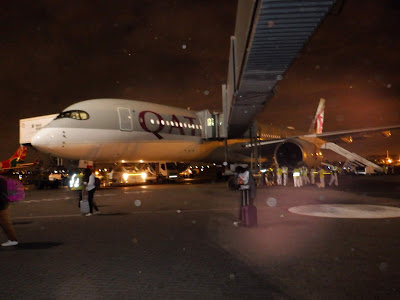 After a short layover in Doha, we jumped onto another plane for the second and final leg which was a mear 8 hours.

We arrived in Nairobi around 11pm local time. 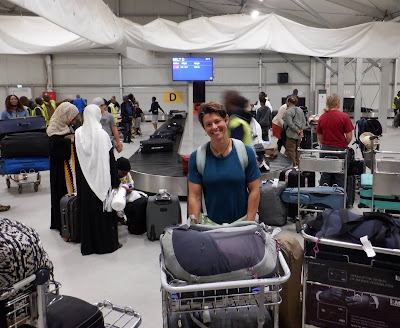 Thank you, Jesus, for all of the opportunities to learn how to wait patiently!!

Even though our final piece of luggage didn't appear for almost an hour we resisted the temptation to complain because we know what a blessing it is to be able to claim every single one of our bags without having to interface with the folks in the Lost Luggage office.


Finally, it was time to go look for Father Bernard, the bishop's financial administrator who agreed to pick us up at the airport. 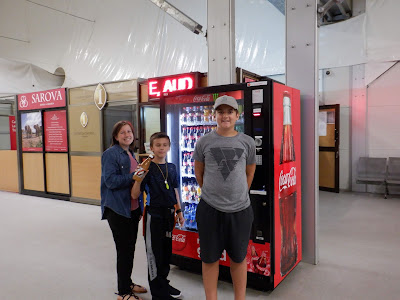 On the way out of the baggage claim area, we encountered a Coke machine with strange choices: ginger-flavored cola, tamarind tea, a coconut/mango-flavored Sprite-like drink and more.  No better time to start enculturating than at the airport. 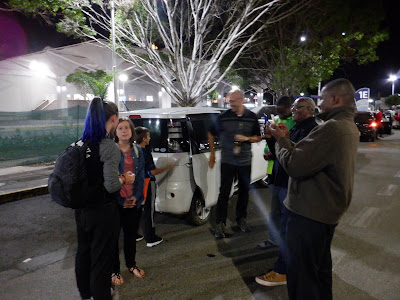 When we stepped outside of the airport there was a sea of people.

Where, oh where, was Fr. Bernard?

As Chris wandered around searching for the priest we had only seen a photo of, he caught a glimpse of a sign that said, "Carmody Family"  which was a bit crumpled in the tired hands of a man who was definitely not Fr. Bernard.  Humm....

"Oh, that is so good because he is looking for you too!" said the man we've come to know as Fr. Franklin.  Shortly thereafter we met Fr. Bernard and immediately began making jokes and sharing funny stories.  Fr. Bernard is a joyful man who has gone above and beyond to make us feel welcome! 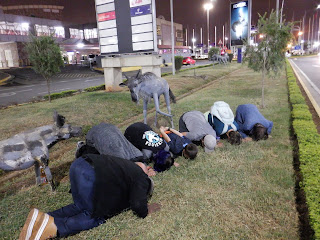 FMC's tradition is that her missionaries kiss the ground of every place they're called to serve as an outward sign of gratitude for all that God has done and will continue to do there.

So, we all got down on our knees (including Fr. Bernard) in front of the airport and thanked Jesus for inviting us to serve his children in Kenya. 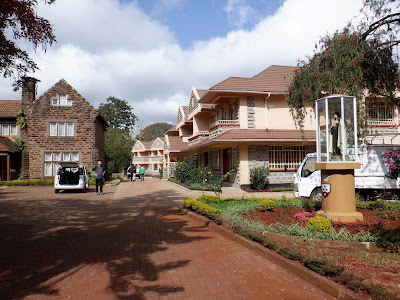 Around 2 a.m. we arrived at a retreat house run by an order of nuns. They graciously welcomed us and insisted that we enjoy "something warm before climbing into the cold beds".

This was our family's first, but certainly not last, experience having tea and biscuits.  We're quickly learning that this is a treasured tradition that the Kenyans acquired from the British many years ago. 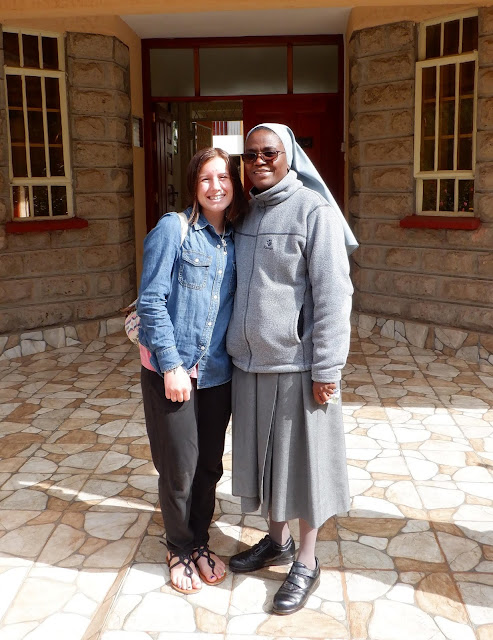 Even though we were only at the retreat house for a short while, Anna quickly made friends with the nuns and felt sad to have to leave.  She is such a blessing to everyone she meets!!

Before heading to Meru with Fr. Bernard and Fr. Franklin, we were able to get Michael's needed typhoid vaccine at the hospital.  We found Chris' thyroid medicine AND we were able to visit the language school that we will be attending in August.

The ride to Meru was long, but we didn't care.  It felt SO, SO good to finally be here!


I will write another blog post soon which describes the compound we're living in, here at St. Massimo Catholic Church, in the town of Mikiduri.  Thank you for journeying with us.  Thank you for your love and prayers.  God bless you!!