Our First Participation in Holy Mass


Mass here at St. Massimo Catholic Church in Mikinduri is the same Holy Mass that is celebrated around the world; however, it's beautifully unique AND significantly longer. For 3-4 hours we clap, sing and dance, which is simultaneously invigorating and exhausting. 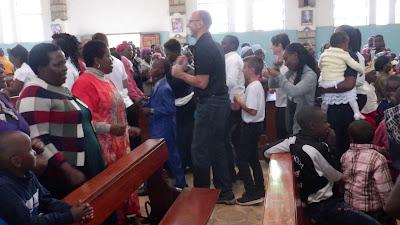 Each week a different Small Christian Community choreographs and performs five different dances for the Mass.  One is done as an entrance celebration, another proceeds the gospel reading, a third accompanies the offertory, the fourth is done after communion, and the final dance is the exit processional.  As it happened, the Small Christian Community that we're a part of was scheduled to perform at Mass the second Sunday that we were here in Mikinduri.  So, we attended the ONE rehearsal to learn all of the moves that were decided on during that same gathering.  It was very humbling to jump in and attempt to learn the moves that they've been doing all their lives.  We all laughed a lot, to say the very least.  Here's a video clip of our entrance dance:


In addition to the dances, the Small Christian Community is also charged with doing the readings and petitions.  Chris bravely volunteered to read the first reading - in English.  He did a great job of going slowly and annunciating each word. 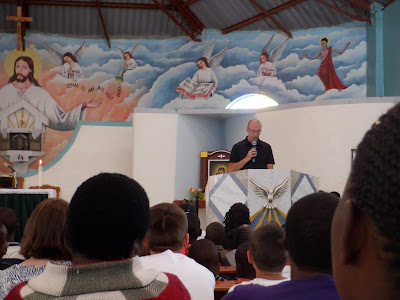 We've learned that everyone in our area learns to speak Kimeru as children. This is their tribal language and is referred to as their "mother tongue".  In the beginning years of primary school, the kids who live in developed areas learn Swahili, which is the universal language of East Africa.  This allows them to communicate with their fellow Kenyans who speak any one of the 44 different tribal languages here in Kenya.  Knowing Swahili also allows the Kenyans to communicate with other East Africans who speak their own respective tribal languages.  Around age 9 or 10, the kids who attend well-funded schools begin learning English.  If they pass the comprehensive incremental exams administered by the government they continue their studies and will eventually become fluent in English.  Those who are less fortunate leave the education system, begin working at a very young age, and never attain fluency.  Our observation so far is that those who speak English have access to good-paying jobs and seem to live relatively comfortably based on local standards.  Those whose circumstances seem more difficult only speak Kimeru or possibly some Swahili.  We're eager to learn Swahili so that we can communicate with the average folks and even hope to learn Kimeru so that we can minister to the poor and uneducated in this area.

During Mass Anna was one of the people who stood in front of the church to offer petitions.  Like Chris, she spoke very slowly and clearly so that the people could understand her.  She prayed specifically that all couples trying to conceive would be blessed with children, that couples who are struggling in their marriages turn to Jesus for strength and guidance, that families be more united, that teens and young adults embrace their faith, that those who have chosen to walk away from the faith have the courage to return, and that they would have their children baptized.  Anna's prayers were incredibly sincere and her humility before Our Lord allowed the people a glimpse of her inner-beauty and strong faith.

Although our participation in Holy Mass was intimidating, especially dancing in front of everyone, we knew that it would be a powerful witness to our desire to be part of this community.  After the service ended, several people approached us to explain how happy they are that we're here.  We ask for your prayers - that we're able to remain open to the Lord's grace, that we make time to celebrate the small victories, and also that we're able to endure the difficult moments with confidence and hope.  Thank you for your willingness to journey with us.

https://www.familymissionscompany.com/donate/
and indicate that your contribution is for The Carmody Family
OR
call Family Missions Company at (337) 893 - 6111.