There is an abundance of grace to be found within the tiny little word...
YES

A couple of weeks ago we received an email, out of the blue, from a couple who works closely with Family Missions Company. They simply stated that there is a priest here in Nairobi who they had worked with in the past that they thought we might enjoy.

Without hesitation we said, "yes".

Our friends facilitated the exchange of contact information and a couple of days later Father David showed up at the language school where we're studying/living to pick us up and take us to his house for lunch.

We piled into his little van with no expectations.... totally unaware of the impact that this upcoming afternoon would have on our lives.

After a short 5-minute drive we arrived at the compound of the Contemplative Evangelizers, a congregation of missionary priests.


Fr. David was really excited to show us around.

They have about 50 acres which is strategically used to sustain the many priests and seminarians who live there.

There are a variety of vegetable plots, tons of fruit trees, and endless rows of corn and wheat. 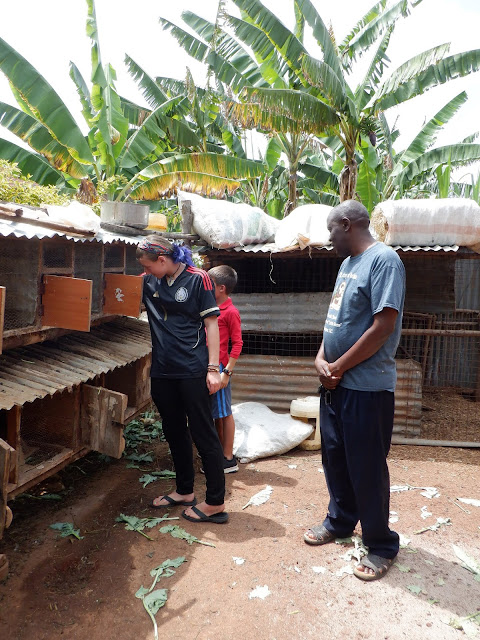 Fr. David showed us the rabbit hutches where the countless bunnies wait to be cooked up for dinner. 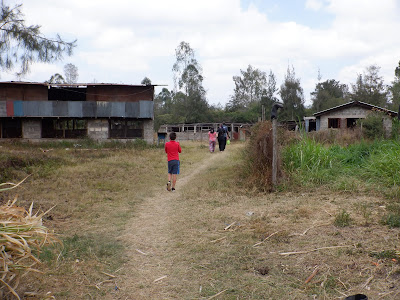 We visited the cows which give them fresh milk each day...


...as well as the pigs which eat everyone's scraps and provide the congregation with yummy meals every now and again. 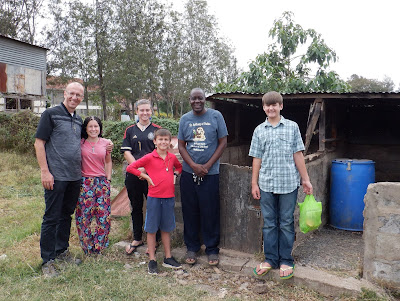 As we were concluding our tour the baby cow escaped from its pen because we forgot to close the gate.  It ran and ran and ran all around the farm... and so we ran and ran and ran after it.  It was really, really silly.
As Father David watched, he laughed and said that he could tell that the cow was "so, so happy" because this was his first chance to run around.  Apparently young cows like to run around as much as kids do. 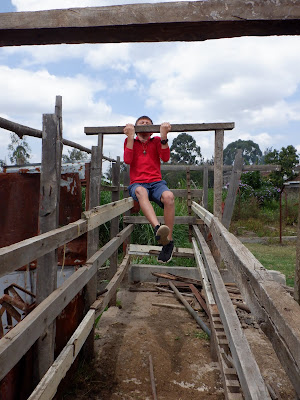 On our way out Michael found the perfect place to do a little exercise.

As he lifted himself up above the crossbeam for the tenth time he asked me, "Why would anyone ever want to go to a stuffy gym when they could just exercise here?  It's so nice!"

Some people believe that our kids are being deprived by growing up in the third world...

I suppose from the outside it may seem like they "have it rough", but I thank God for the opportunity that we've been given to live so simply.

So, you're probably wondering why this relatively uneventful trip to the mission house was so life-changing.  Let me explain...

After our tour we headed to the dining room for lunch.   As we ate, Fr. David told us about his congregation's mission.  They have priests all around the world, many of which are doing what he called "first evangelization". 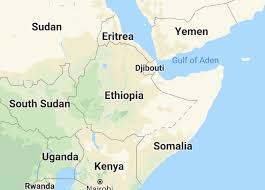 For example, they have priests in the northern part of Kenya, close to the borders of Ethiopia and Somalia, where the people there have never heard of Jesus Christ.  The population is predominantly Muslim and the response to the missionary priests' evangelistic efforts "have been very, very bad", according to Fr. David.  We told him about our desire to serve where we're most needed, which changed the direction of the conversation.  As Anna listened quietly she began to cry.  I leaned over and whispered, "What's wrong Sweetie?"  She shook her head, wiped away her crocodile tears, and continued listening.  I inquired again.  "I don't want to move around," she whispered, "I don't want to start in one place, but then move somewhere else after a year or so.  I just want to know where we're going to be so that we can settle down and start making some friends."  I tried to comfort her by telling her that we have agreed to stay in Meru for the time being so there is nothing to worry about - we will make friends there and everything will be fine.  I reminded her of the importance of us remaining open to the Holy Spirit so that we're doing God's will and not just what's comfortable for us.  This didn't make her feel any better.  As we were whispering Fr. David asked what was wrong.  After I summarized Anna's concerns, Fr. David smiled so big, leaned back in his chair and said, "Anna, when it's time to say good-bye to the pizza, you just say good-bye.  It's that easy!"  This seemed like such a strange response.  Thankfully he said more.

"You know that I'm a missionary.  You're a missionary too!  So when it's time for us to say good-bye, we say good-bye, just like that."  As Fr. David explained a bit about the various places in which he has served, he said that whether he is in a place for a couple of months or a couple of years the people seem to be equally as sad when it's time for him to leave.  "Father," they say as they're crying, "please, please stay.  What are we going to do without you?  We need you here!"  He said that he simply tells the people in a kind, but honest way, that his mission there is over and that there are other people in other places that God wants him to serve.  "When it's time to go, we go!" he said to Anna in an enthusiastic voice.  Smiling in such a genuine way, Father said, "You know, every place has good people and good food.  When you leave the good people and the good food in one place you don't have to worry because there are good people and good food waiting for you in the next place.  I tell you Anna, that when it's time to go, you go - just like that - because you are a missionary and that's what we do!"  As he finished he spiel, Father looked around and noticed that we were all done eating our lunch.  "It looks like it's time to go!" he said laughing so hard that it was impossible not to laugh with him!

I thank God for Fr. David's honesty, but more so for his funny delivery which seemed to be exactly what Anna needed.  For the rest of our time together he kept joking with Anna about whether or not it was time for us to go....meaning back to our house at the language school...but it was so funny.  When the time arrived for us to actually leave the compound we all said in unison, "It's time to go!" and piled into Father's little van.

On the ride home Anna and I sat next to each other.  She leaned into my loving embrace, smiled and said that she was really happy that we had the chance to meet Fr. David.  Although our time together was short, he changed our life by changing our perspective.  I believe that he will remain a legacy in our family and we'll remember him each time we have to leave somewhere by saying,

I humbly ask for prayers as we continue to seek the Lord's will for our family...one day at a time!
Love, Karen