Our 1st Visit to the Girls' Orphanage in Nairobi

I read online that there are over 200 different slums in Kenya's capital city of Nairobi and that approximately 60% of her total population considers the slums their home. Although disturbing, this statistic doesn't surprise me after seeing slums that extend as far as the eye can see. 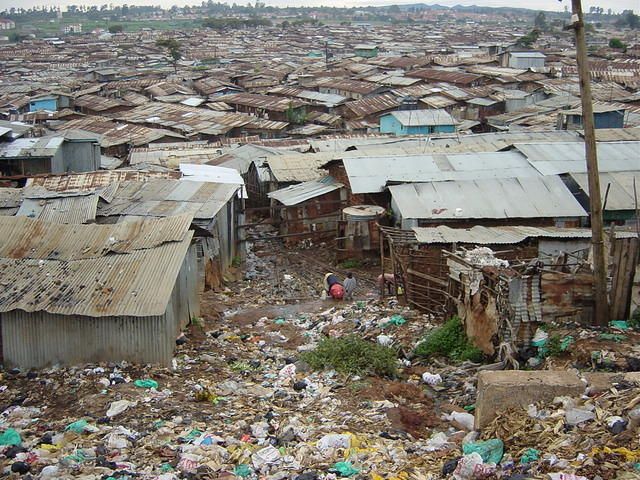 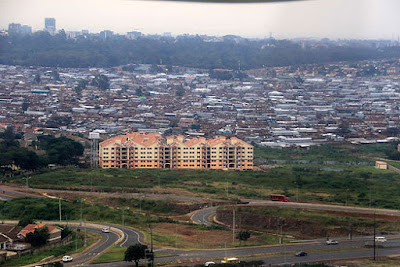 As a matter of safety we intended to remain on the bypasses, which go around the slums, as we traveled from one part of Nairobi to another; at least until we became comfortable with our new environment.


One day we ventured out to find a shopping plaza using Google Maps.  As you probably know, this app allows users to choose "the fastest route" or "the shortest route"; one can even indicate if he wants to travel on toll roads or not.  However, there isn't an option that we're aware of for avoiding certain types of neighborhoods.  So, we followed Google right into the middle of Kibera, Nairobi's largest slum.  I wasn't sure if this was the fastest route or even the shortest route, but it definitely was the most authentic representation of what life is for millions and millions of Kenyans. 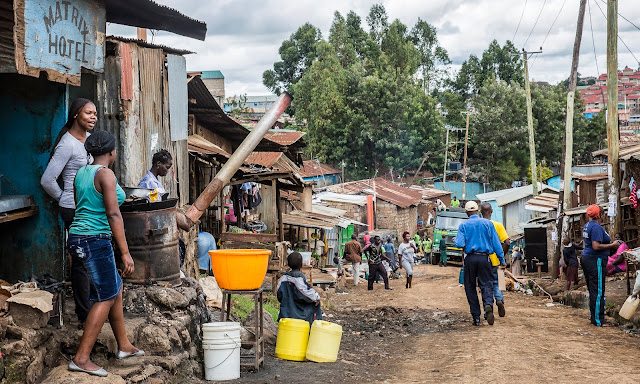 Against the better judgement of some, I'm sure, we drove slowly with our windows down, smiling and greeting the folks we passed in Swahili.  Some smiled back, others pointed; most just stared. 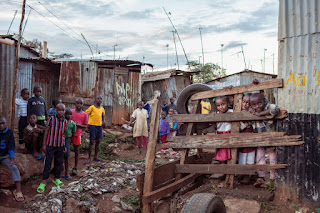 There were a few moments that we felt compelled to pray especially hard for protection against whatever evil may be lurking.  For example, on one very narrow, twisty road we came upon a small mountain of rocks blocking the way.  The people watched, wondering what we would do.  Perhaps our vehicle could have made it over, but we weren't willing to risk getting stuck.  The bystanders giggled as we made a 14-point turn around in the tiny little space.  There was nothing for us to do other than laugh along with them, which I think was refreshing for them to witness.

As we've become more familiar with Nairobi's layout we've learned the general location of the larger slums.  All praise be to God, we don't feel afraid to travel through them when we 're directed by Google to do so - usually to avoid waiting in traffic for hours and hours on the "regular" roads.  As we've driven through these very, very poor communities I've felt drawn to the people there.  I long to sit on a bag full of sand, outside of a humble little shop, and talk with people about how Jesus can help them to deal with their hardships....however, I know that now isn't the time.

Last weekend we visited an orphanage in the slums that is run by a congregation of nuns who rescue girls from sexually abusive situations. Some of the girls are victims of human trafficking; some were abused by those caring for them after their parents died or left; while others were simply unsafe in their own homes. One of the nuns drove with us to the orphanage, which worked out perfectly. Together, we navigated the slum's narrow streets and twisty turns until we finally ended up in what seemed like the "projects".  This is a really nice part of the slums in which there are multi-story apartment-like buildings where people can rent a room or even two for their families to live in.  I was told that these housing units usually have running water and even indoor plumbing.

When we passed through the front gate of the orphanage compound we warped into another world: green grass, trimmed bushes, flowers blooming all around.  A really friendly nun greeted us, directed us to park in front of their living quarters, and insisted that we join them for tea...so we did. 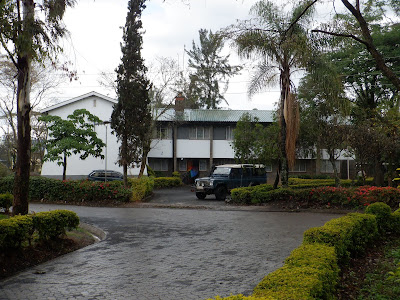 As we were enjoying our chai and biscuits, the missionary nuns told us about their orphanage: how/when it was founded, what responsibilities each of them have, the ways in which they find the girls, the legal regulations that guide their work, and so much more.  Below is a photo of one of the girls' dormitories. 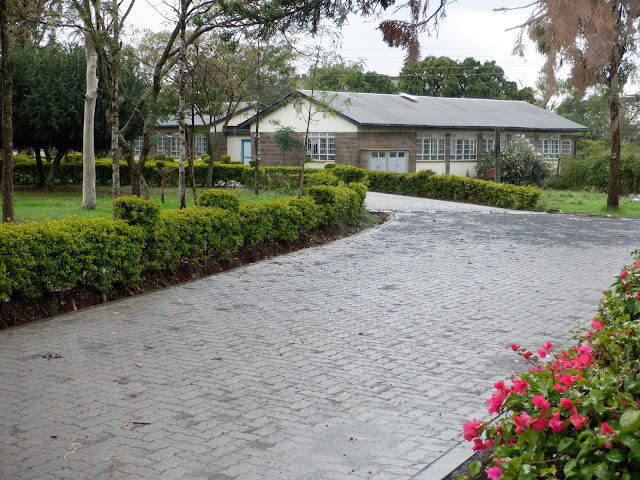 During our visit we learned that the nuns have a private, all girls, high school on campus, but it is atypical for the girls living with the nuns to attend because most have been reintegrated into their families before reaching secondary school.


The nuns have extensive training and experience in the process of reuniting children with family members after they've learned to deal with and overcome the hardships of their particular circumstances.  Ignorant of this aspect of adolescent therapy, I asked a lot of questions.  I now understand more about the direct correlation between a girl feeling like she belongs to a family, even if it's a dysfunctional one, and her overall emotional well being as an adult.  When the nuns explained their goal of reuniting the girls with their family members I was shocked and could only imagine them returning to the nightmares from which they were rescued.  However, this is not the case.  I learned that this amazing group of nuns works hard to find a person in each girl's family who is responsible, healthy, loving, able and willing to care for the child after she leaves the nuns' home.  By law, the nuns are able to have each child in their care for a maximum of six years, which is a significant amount of time in a child's life. 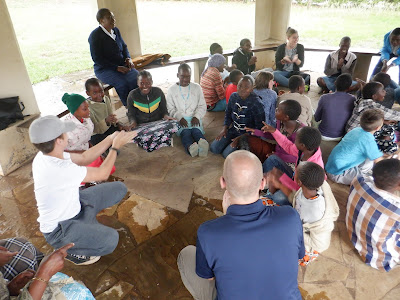 After our orientation we finally got to meet the girls.  They came to the pavillion in the middle of campus, shook our hands, stated their names, and politely sat on the benches around the outside edge.  We knew that we needed to do something to break the ice; so, we taught them the animal game that we learned from our friends at the Lord's Ranch in New Mexico.  Within moments the ice was broken and everyone was giggling.  Some were elephants and others were crocodiles, but all were having fun!  To see a short YouTube video of us playing this game, click the following link:


Teaching the Girls the Animal Game

As we were playing the animal game it began raining. This was no surprise because we've entered into the rainy season during which it rains every single day and all night, every night.  It was a good time to transition into our next activity ~ Katelyn and Anna singing the Our Father in Swahili, which the girls really enjoyed. 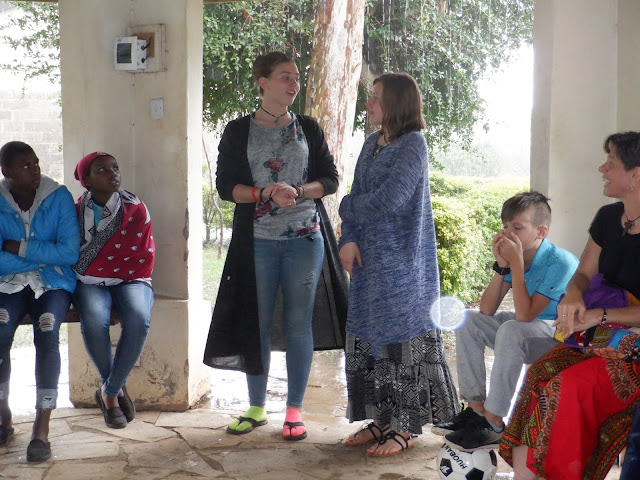 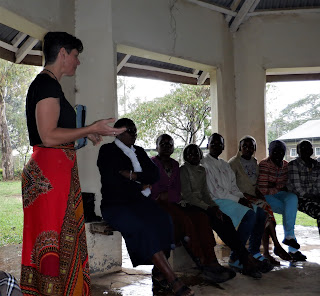 Next, Anna shared a bible passage that the Lord gave her earlier that day in her personal prayer time.  It was from the prophet Isaiah and reminds us that God's love is free.  The girls were very attentive as they listened to Anna's beautiful reflection.   When Anna was done she (unexpectedly) invited me to share a bit from my bible.  In that moment I felt especially thankful for the discipline that I've had these last four years to read my bible every day.  I thought about how Jesus tells us to always be ready to give reason for our hope.  I was ready - I quickly flipped to John 8:32 which says, "the truth will set you free" and spoke to the girls about my love for God's Word, which IS the truth that sets us free, gives us hope, and makes this life worth living. 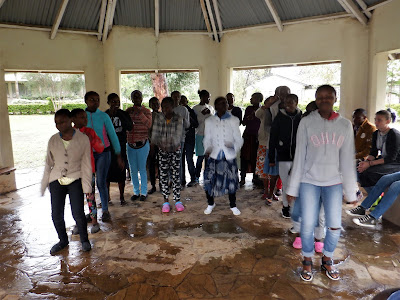 When we were all done the girls wanted to sing us some praise and worship songs.  One was in Swahili and another was in Kimeru.  You can see a video of their performance if you click on the following link:

An African Song of Praise at the Orphanage

The last song that the girls sang was in English.  Within seconds I realized that we knew the song that they were singing, which blew my mind.  Imagine....these girls here in Kenya have been praising God with this song and at the very same time my family has been in Peru, Mexico and the United States singing the exact same song, to the exact same God.  As you could have probably guessed, it made me cry.  The way that the Holy Spirit moves in the hearts of people all around the world simultaneously is beautiful and amazing!!

Before we left I took a picture of my family with all the girls and some of the nuns so that we can remember the time we had to share with them.  I'm not sure whether or not we'll have the chance to visit again, but that's alright.  I felt peace as we were leaving, knowing that we were able to reinforce all that the nuns are teaching them about God's unconditional love for them. 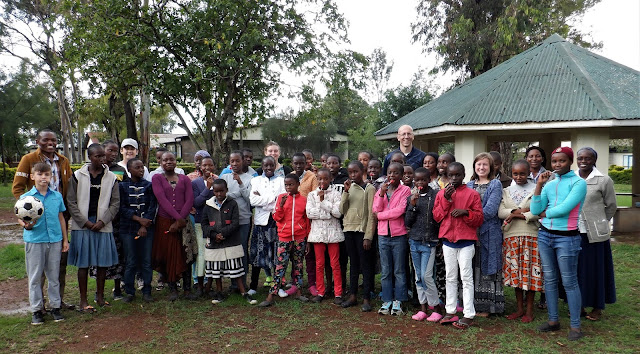 Frank Summers, the co-founder of our missionary organization, has told me that "the success of missions is measured in lifetimes."  At various times over the course of these last several years I have interpreted this in different ways.  On this particular day, as I reflected on Mr. Frank's insightful words of wisdom, I felt grateful for the opportunity to be one of the many people who will help the young ladies at this orphanage come to know the living person of Jesus Christ.  I felt thankful for the chance to contribute, if even in a small way, to the success of the mission here in Kenya.