Getting Bit by the Bug - Or Not? 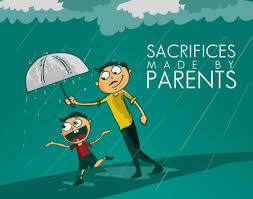 Years ago, when I found myself struggling to understand the difference between "sacrifice" and "suffering", I sought counsel with a priest who explained it quite simply; sacrifices are those intentional acts of love that we choose to make, while suffering is something that we endure as we deal with life's hardships.  He spoke about the difference between the hardships resulting from human sinfulness and those that we face when the natural world follows the scientific rules that God established at the dawn of creation.  I listened attentively as the priest explained the spiritual necessity of making sacrifices, and encouraged me to thank the Lord in advance for any opportunity that I would have to suffer in this lifetime.  I left satisfied with my new understanding and felt inspired to modify the age-old saying "when the going gets tough, the tough get going" to somehow include Jesus so that I wouldn't forget to invite Him into my difficult moments. 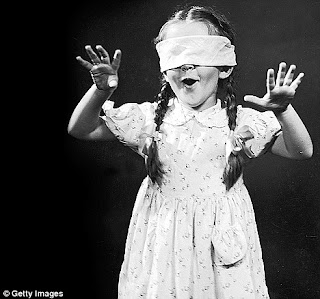 Last year, when my family and I participated in a week long retreat that included instruction on what one person called "holy indifference" and another referred to as "living without a preference", I found myself contemplating the ideas of "sacrifice" and "suffering" all over again.  As missionaries living in the third world we have ample opportunity to make sacrifices.  We accept the discomforts and inconveniences, with a clear understanding that they do not constitute "suffering".  We strive to "live without a preference" and have a "holy indifference" as to how things go on any given day.  I want to be like a blindfolded little girl, excited to receive whatever the world puts in my hands...good, bad or otherwise.  When I remember, I thank the Lord in advance for any hardships that I will face, and beg Him for the grace to endure whatever comes my way....even the Nairobi Fly!

"What is the Nairobi Fly?" you may ask. 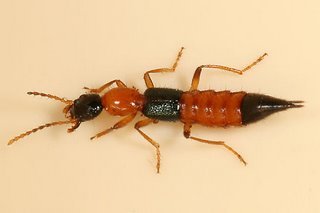 Well, it's a beetle about 1cm in length that can neither sting nor bite, but holds within its tiny little body a toxin that some say is worse than a cobra's venom.  That acidic fluid is released when a person squishes the bug against his/her body....like I did in the middle of the night when I felt something crawling on me.

In the morning my neck felt a bit itchy, but I figured the mosquito had probably just gotten to me before I had the chance to get to him.  As the day progressed the spot on the back of my neck became itchier and started feeling hot.  At some point, I looked in the mirror and noticed a large red welt with about 40 little whiteheads.  "I must have gotten bit by a spider or something and not just a mosquito." I remember thinking.  Within a couple of days it became obvious that something was happening.  The splotch on my neck now extended down to my collar bone, I felt a little bit like someone was holding a branding iron against my skin, and the whiteheads had turned into pussy bumps.  When I tried to relieve the unbearable itching, the squishy bumps broke open and caused an even more intense burning sensation. 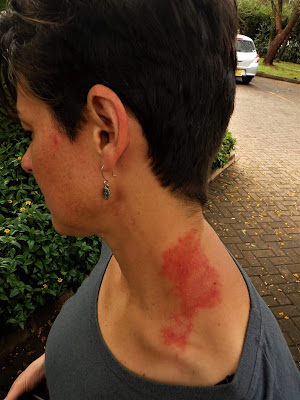 My loving family encouraged me to seek medical attention, but I remained confident that it wasn't anything that a good, thick layer of hydro-cortisone cream wouldn't cure.  When that didn't work, I tried other creams, rubbing alcohol and even some anti-fungal medicine that was laying around.  I wish I could say that I was deep in prayer and offering all of my suffering for the salvation of souls, but in reality I was just being "bull-headed", as my dad says.  It wasn't until chunks of skin started falling off of my neck that I was willing to admit that someone who knows more than me should probably take a look at what felt like a serious burn.

The doctor at the hospital informed me of my encountered with the Nairobi Fly.  He told me about the acidic venom that was released when I smashed the bug on my neck and determined that I had also developed a secondary bacterial infection which was causing dark patches to form on my neck and red bumps on my face.  He prescribed a combination of topical steroid / antibiotic creams, pain relievers, antihistamines, and oral antibiotics which I took for many days. 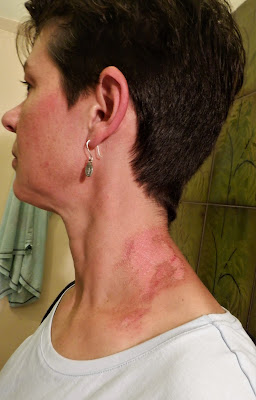 Slowly the bumps disappeared, the swelling subsided, and the burning waned, leaving me with a large patch of raw, sensitive skin that made me aware of even the slightest of breezes.

I think it's been about a month since I was bitten by this mysterious little insect.  The pain in my neck has been replaced by a strange, itchy, tightness that I think is just the new skin growing back.  I continue to self-medicate with various creams and wonder what kind of scar will remain.  As I've thought about this crazy Nairobi Fly experience I've realized that it's been a PH Test of sorts for my spirituality.  I never felt angry at God because I knew that this is a perfect example of what the priest described as the hardships we face when the natural world follows the scientific rules that God established at the dawn of creation.  I don't know why He filled Nairobi flies with a toxic venom that burns human flesh, but He did, and that's alright.  I don't know how or when this bug got into my room, but I'm confident that the devil had nothing to do with it, so that eliminates a whole category of spiritual confusion that I believe gets the best of people at times.  I tried to embrace an attitude of "holy indifference" and just accept the discomfort without wishing for something else.  I didn't second guess our decision to come to Kenya, so that's good news, but I also didn't offer any of my suffering up to the Lord....for anything; I just quietly endured. 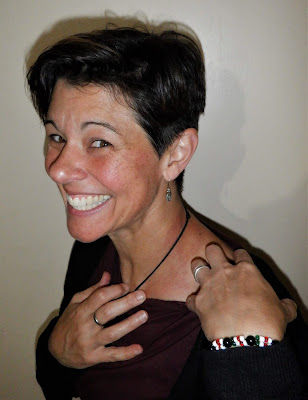 Now that this hardship has passed I've realized that my suffering, minimal though it was, was all but wasted because I insisted on doing it alone.  I hear people talk about uniting their sufferings with the sufferings of Christ, but I don't think I even know what the practical application of that looks like.  I've read about redemptive suffering, but I'm obviously not far enough along in my own spiritual journey to be able to do what the scholars teach.  When I'm honest with myself I see that I just reverted to my "tough girl" attitude whereby I decide that nothing (or nobody) is going to make me suffer...and so I didn't, even though I had the opportunity to.  Through prayer, I've realized that this quandry of "sacrifice" versus "suffering" is really about my inability to surrender to the Lord.  I'm perfectly willing to make sacrifices because, as the priest said, it is an intentional decision that I am making out of love.  One might rephrase that and point out that as long as I'm the one making the decisions, I remain in control.  When we suffer, we must endure something that is out of our control, which I must not be ready for quite yet.  I beg for your prayers, that I am able to learn how to surrender in a real way so that I may obtain the abundance of graces that the Lord has for me.  I will continue to thank the Lord in advance for upcoming opportunities to suffer, hoping that I'll do better next time!  I will also continue to make sacrifices, especially for those supporting us in this life of missions, because that's all I know how to do at this point.  I thank you for your willingness to journey with us.  I thank you for your love and prayers.  I ask that Jesus fill your heart to overflowing so that you may share that love with all those you encounter..... even the Nairobi Fly...hehehe!!!

Peace be with you!
Karen