The Rain Can't Stop Us!

In 2 Timothy 1:8, St. Paul says that we should "bear [our] share of hardship for the gospel with the strength that comes from God."  We beg for the intercession of St. Paul, that he would petition the Lord to give us the strength we need to not just endure the rainy season here in Kenya, but to enjoy it and have His praises ever on our lips.

Our little town of Mikinduri is located in the eastern foothills of Mt. Kenya where the climate is said to be "extremely mild".

When we arrived in July it was sunny and dry.  Daily temperatures hovered around 90°F and at night it dipped down into the 60s.  This trend continued through September and we felt like we were in heaven.  Little did we know, that with October would come the rain...lots and lots of rain! 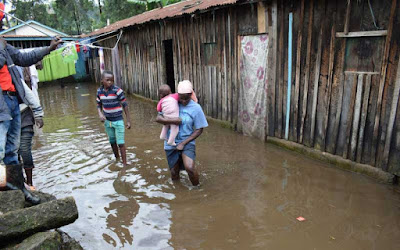 In November Mikinduri got 17 inches of rain and December has been even wetter.  To put this in perspective, I read that during the rainiest part of the year Detroit gets an average of 3.5 inches in a given month.

The people here are indifferent to the rain, which I suppose makes sense since they've been living with it all of their lives.


On the news there are regular reports of flooding and landslides which have destroyed communities and taken lives.

We praise and thank God for allowing our troubles to be so minimal.

Here in the foothills the terrain is very hilly... 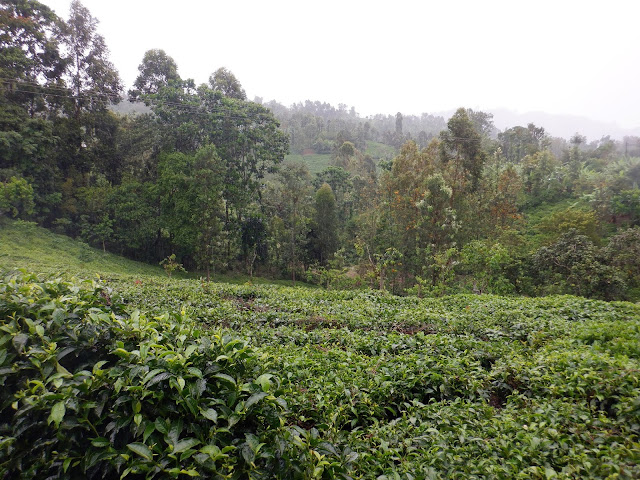 ...so, when it rains the water flows down the dirt roads like water slides. 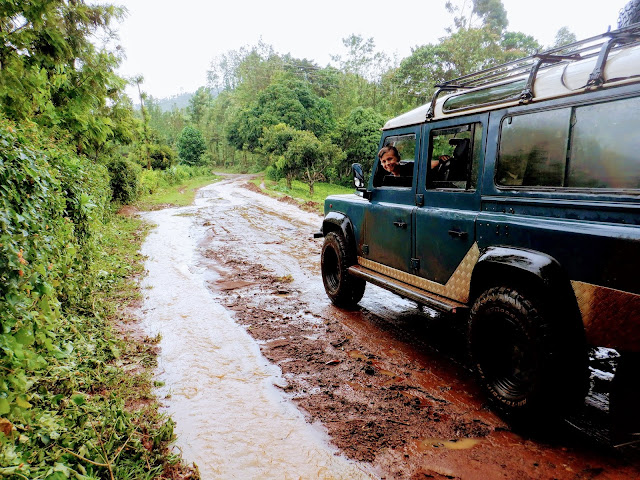 Michael loves driving through the mountains on the crazy muddy roads and thinks it's exciting when we start sliding into the ruts and ditches.  He's laughing and yelping while the rest of us are praying fervently that we don't roll down the hill and crash to our death.

Last week we traveled to an outlying village to celebrate a communion service.


When we finished we decided to go check out another village nearby that we had not yet had the chance to visit.  Unbeknownst to us, the recent rains had made the route between these two communities impassable to most vehicles. 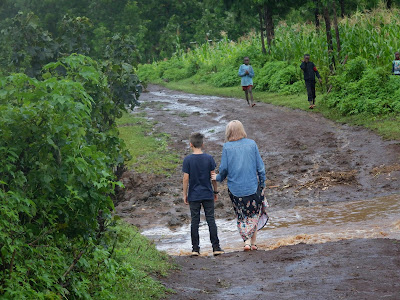 Michael always enjoys the bumpy ride, but he was especially excited when we "got to" cross a river of sorts.

Although the rushing water wasn't very wide, it was deep because the rain had filled a shallow gulch that wound this way and that through the earth.

As we made our way through the current, we thought of St. Paul telling us that we must "bear [our] share of hardship for the gospel with the strength that comes from God."

Following are three video clips that kind of capture our drive, although the craziest moments remain only in our memories because the battery on my camera died.

Crossing the River on the Way to the Prayer House
https://youtu.be/ASToh8dTu5A


Perhaps by divine intervention, we arrived at the second prayer house just as they were doing the offertory.  Normally, their Liturgy of the Word service would have ended shortly after each person put their donation into the collection box; however, we were able to continue the service and share the Holy Eucharist.  The members of this community were not only suprised, but visibly elated because they receive communion so infrequently; given their remote location, the priest is unable to visit but a few times a year.

As we were headed home the sky became dark and it started raining (yet) again, which made the already terrible roads even worse.  Thankfully we arrived safely and in enough time to lead the Small Christian Community meeting at St. Massimo that evening. 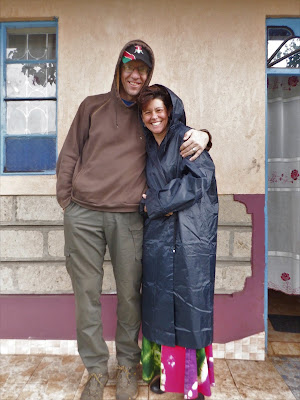 The non-stop rain makes travel difficult, but it also makes the tasks of day-to-day living more challenging.  We walk to town (in the rain) to go to the open market where all the ladies are sitting on the side of the street selling their fruits and vegetables (in the rain)....


Thank you Jesus for allowing us to "bear [our] share of hardship for the gospel with the strength that comes from God."


Our electricity often goes out for long periods - sometimes even days.  So, after the sun goes down at 6pm we do everything by candlelight. 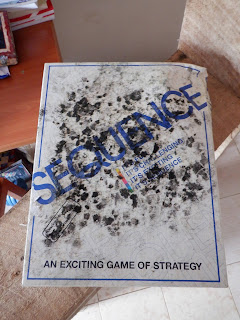 Another challenge is that the things in our house that we don't use daily get moldy from the high levels of humidity.  After being gone for a few days we opened the cupboard where we keep our games, only to find many of them covered in black, fuzzy mold.  We wiped them off with bleach water, but such a practice sure is hard on cardboard boxes.


Thank you Jesus for allowing us to "bear [our] share of hardship for the gospel with the strength that comes from God."


We try to burn our trash in between storms, but it's hard to time it so perfectly.  We've noticed a huge increase in the amount of trash that lays around town because others are having the same problem. 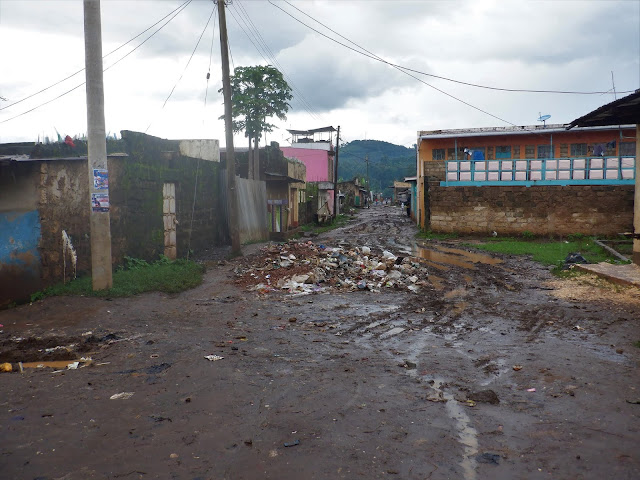 Here are a couple of videos that attempt to show what it looks like outside of our house on any given day during this rainy season:

An Example of the Rain at Our House:
https://youtu.be/2d3ikWFEOmo

A Close-up View of the Rain
https://youtu.be/FJpzKW1asiM

The most challenging thing about the non-stop torrential rains is trying to dry our clothes. Some days, after washing our clothes, we hang them up in our little backyard to dry.  Shortly thereafter it starts to rain, so we rush outside to take everything off the line.  An hour later, when the rain subsides, we go back out and hang everything up again.  Before they're dry, the sky opens up again, so we run outside again.  There are days that we repeat this routine three, four or even five times. 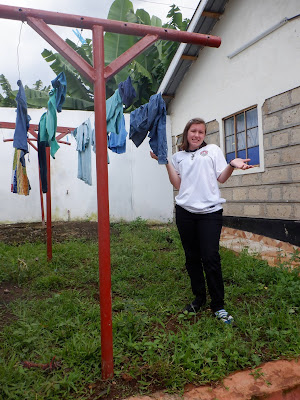 Here is a photo of Anna trying to keep a good attitude after hanging the same clothes up four times.  If you listen closely, you may hear her saying,

"Thank you Jesus for allowing us to 'bear [our] share of hardship for the gospel with the strength that comes from God.' " 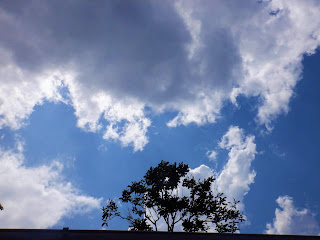 I think it's most frustrating when we're hanging the clothes up on the line for the umteenth time in a given day and before we even get the last item re-hung, the clouds move in and it starts to rain again.


There was one day in particular that I had run outside to hang, collect, re-hang and re-collect our clothes multiple times.  In the early afternoon we were called away from the house for a short amount of time.  I considered taking the clothes down, but the sky was blue and there weren't any clouds in sight.  Plus, the clothes were still damp and the last thing I wanted was to end up with a pile of mildewy-smelling clothes that I would have to rewash....ugghhhh...image how discouraging it is to start this nonsensical process all over again! 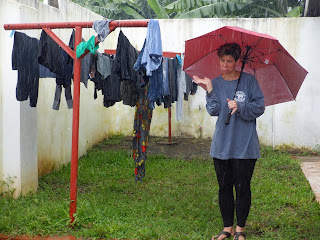 Anyhow, as we were driving back home it began to sprinkle so Chris started driving a bit faster.  As we were pulling into our compound buckets of rain began falling from the sky. I couldn't believe it!  By the time we reached our house the clothes that I had worked so hard to get dry were totally drenched....uggghhh!!! 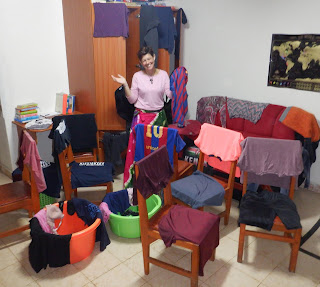 Sometimes there are so many consecutive days of rain that we have to try to dry our clothes inside the house by hanging them on chairs, buckets and cupboard doors...which isn't very effective because of the humidity....but it's the only option we have.

We've learned that the part of Kenya in which we're living has two rainy seasons: a short one which begins in October and ends in December....that's the one that we've been enjoying these last few months.... and a long one which typically begins in February and extends into June.   I can see why the locals feel so indifferent; torrential rains that last for months are just a regular part of their lives.  I pray for the grace we need to praise Jesus even when we're feeling challenged.  I pray that we're able to embrace the words of St. Paul and joyfully "bear [our] share of hardship for the gospel with the strength that comes from God."  I humbly ask for your prayers as well, that the rain doesn't stop us from loving this place in which we've been called to serve.