During our stay in Mikinduri we often went to prayer houses in the outlying villages to celebrate communion services.  On a particular Sunday we left Mikinduri with the impression that we would be visiting one community, so we only took enough consecrated hosts for that one stop. 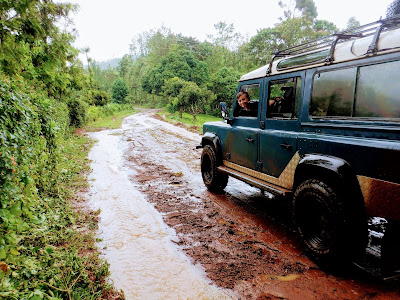 After finishing, we loaded into the truck.  When we turned on the phone there was a message from our priest asking if we could possibly go to another prayer house on our way home.

How could we do that?  We only had four hosts left.

We considered calling the catechist at the prayer house to tell her that unfortunately we wouldn't be able to celebrate a communion service for her community, but our kids insisted that we go.  Fully confident in the Lord's abilities, they said, "Jesus will make sure that everyone who is supposed to receive today will be able to receive."  Maybe that meant that there wouldn't be very many people at church, I thought.  Chris and I weren't really sure what the Lord had planned, but we agreed to go.

During our drive to the next prayer house we all prayed like crazy that somehow, someway Jesus would multiple the hosts inside the ciborium that I held close to my chest. 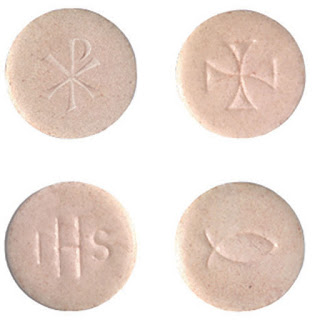 When we arrived at the church I didn't say anything to the catechist because I was hopeful that the Lord had miraculously multiplied the hosts during our trip.  As I was preparing the altar I silently prayed once more that the ciborium would be filled with hosts.  Then, in nervous anticipation, I lifted the lid... only to find the same four hosts that were there before.  What now?  My heart sank.


I motioned to the catechist to come to the altar so I could inform her of our dilemma.  She assured me that everything would be alright.  She would take a count of how many people would be receiving communion and then we would just break the four hosts into the necessary number of pieces.

I was a bit skeptical of this plan because the hosts that we used were smaller than those used in the United States.  The catechist stood in the front of the church, explained that there was a limited number of hosts and that we needed to take a count of how many people were planning to receive.

Thirty-eight, not including my family members?  How were we supposed to break four small hosts into so many pieces?  The catechist looked unconcerned. 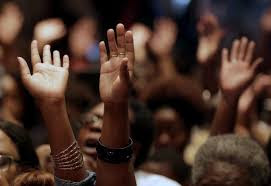 When she returned to the altar we said a prayer together and then began breaking the hosts.  An obvious place to start was breaking them all in half.  Good - now we had eight.  We broke each half in half, which made it seem like there were significantly more, but in reality we still only had sixteen.  To break each quarter in half would only have produced thirty-two.  Hmmm??  Ever so gently we broke the pie shaped quarters into smaller parts.  When the hosts were whole I noticed that each one had an image pressed into it.  Given this uneven nature, the hosts did not break very evenly.  In some cases we were able to break a quarter piece into only two, while other times we managed to create three small pieces from one pie-shaped quarter piece.  When this careful process was complete we counted and counted again - there were 42.  Thank you Jesus!  I knew that there wouldn't be enough for my family members to receive, but that was no problem.  I carefully placed the lid on the top of the ciborium, bowed to Our Lord, and walked to the back of the church to begin the entrance processional.  Normally I danced and tried to sing along, but today I felt far too preoccupied.

During the first reading I noticed some people sneaking in and taking seats in the back.  During the second reading even more arrived.  Usually I would have been happy about the large turnout, but given the circumstances I felt nervous.  The gospel was read and then Chris gave a reflection.  I found myself distracted as additional stragglers found seats.  Before communion I leaned over and asked the catechist what we should do about the extra people who had arrived.  Perhaps we should announce that they won't be able to receive communion?  "No, no.  Don't worry!  The Lord will work it all out!"  I wasn't sure what she meant or why she felt so confident since we both knew that there were only 42 small pieces of the Eucharist in the ciborium. 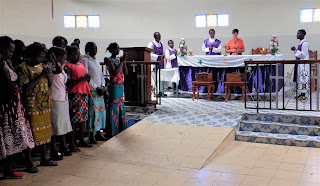 As I began distributing communion I found myself counting the recipients... 1... 2... 5... 11... 14... 19...  The line kept getting longer.  27... 31... 40... 45... Wait!  45?  How is that possible?  46... 47... 49...  There were still more people in line AND there were still pieces of the Eucharist in the bottom of the ciborium.  But how??  In total, 56 people received communion.  After the last person turned to walk back to his seat I glanced down and quickly counted 8 additional pieces, so I motioned to Chris and the kids to come up.  After they received I looked down into the ciborium once again and saw three pieces sitting ever so peacefully.  I turned my head to the catechist who was sitting in the chair by the altar.  She simply smiled and nodded as if to say, "I told you not to worry!"  I placed the ciborium back on the altar and sat down.  She grabbed my hand, squeezed it tightly and whispered, "Thanks be to God."   As the choir sang a song of thanksgiving my mind raced.  Was it possible that the catechist and I both miscounted how many pieces we had initially?  I doubt it.  Could I have miscounted how many people received?  I suppose.  Were there people who just came up for a blessing that I accidently included in my total?  No, nobody came for just a blessing today.  Is there anyway that someone could have added hosts to the ciborium during the service?  Absolutely not....  Could Jesus have multiplied the fragmented pieces of Holy Eucharist to make sure that everyone who was supposed to receive today was able to receive, just like our kids said?  Of course!!

After the communion service I explained, as best I could in Swahili, what had transpired.  The congregation erupted in applause.  I feel honored to be able to serve alongside of such faith filled people as my family members and the wonderful catechist who never doubted Jesus' desire to provide for those who love Him so much.  I thank God for all the opportunities He gives us to grow in our faith, that we may continue to proclaim His love to all we meet.

Thank you for taking the time to read about our mission.
In HIM,
Karen