Alberto turns over a new leaf for Christmas by Chris

When we were starting our ministry at the corner market which is the local watering hole, we met a man named Alberto.  Karen wrote about him a bit in the blog titled, "A Thanksgiving full of Thanksgiving".  Since that time in late November, his health seemed to be deteriorating.  We encountered him once stuck on the other side of town with no ride back from a doctor's visit.  We found him a ride and helped him get back to the town plaza.  That day he was not doing so good....he wound up being transported to the local hospital where he spent a few days and was released.  From what we can understand, he had been in and out of the hospital so many times before and he told us that he didn't want to go as he thought he was going to die.  He told us "Nobody there cares about me and I don't want to die alone!"...to which he also added, "You guys care about me so I'd rather stay with you!".  Albert had spent some time in the U.S. in New Jersey and speaks a mixture of English with a Jersey accent mixed with his native Spanish.  So try to imagine a tough, New Jersey accent as he said these things.  The next time we saw Alberto, Karen was off having what we call a "Desert Day" which is an extended time with your bible immersed in God's Word.  While Karen was away, Alberto stopped by the house and he looked terrible.  I thought that he could die at any moment (based on my experiences in Peru) and I asked him if he wanted me to call a priest.  He said, "Yes, but don't call the hospital as I don't want to go back there!"  Father Rafael stopped by and advised that he had previously administered the anointing of the sick to him only a few months back and that he could not again for a few months.  He advised us to call an ambulance because if he died at our house there would be an investigation.  What a dilemma, huh?!?  So, after Father left for another appointment, Anna and I started to talk to Alberto to see what he had eaten recently.  He had tried to eat a can of Chef Boyardee spaghetti cold and it did not agree with his stomach and came right back up.  We believe that Alberto has some kind of stomach ulcers as he has intense pains whenever he eats anything.  This has led him to drink beer constantly as it does not hurt his stomach.  He said he was tired and wanted to lay down on our front porch.  So, here is a photo of Anna with Alberto and at this time, we thought he would pass quietly on our porch and we would just deal with whatever the consequences are of that happening.

So, after he rested for a while, he came to and asked us if we could get him some fruit as that was easy on his stomach.  I asked what fruit he liked and he said he liked grapes, which we happened to have, so I got him some grapes.  He ate some of those and drank some water and started to come around.  He got out a number for a cousin of his and he called him to come and pick him up.  We wanted to meet him over there to make sure everything was alright.  Back in November, Alberto was sleeping at the local basketball court but now, he was back living in the little house that he has right behind his mother's old house.  We figured that he needed a little table and chairs to sit outside of his house to avoid the temptation to go have a drink across town.  We picked up a small plastic table that came with an umbrella and two plastic chairs to take over to him for Christmas.  Here are some photos of us delivering the gifts and enjoying a soft drink with Alberto.  He is drinking a local soda called "Coco Rico" that is like coconut flavored Sprite.  It is one of the local favorites along with "Malta India" which is a malted beverage that, to me, tastes like you are drinking carbonated molasses. 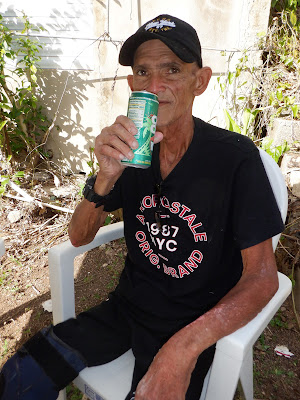 Close-up of Alberto
When we had arrived, his "oldest and bestest friend" was there to clean up his wounded foot and to rewrap it with clean bandages.  His friend also helped him to shave himself and had got him a new hat and a new shirt for Christmas.  Alberto told us that night, "I don't wanna drink anymore, I am done, I am through with that!".  We said a little prayer that he really was turning over a new leaf for Christmas.
We have been over to see Alberto a few times to visit, help him clean up his yard and to play dominoes with him.  He is doing better and is able to eat now without the shooting pains in his stomach.  Please pray that Alberto is able to stay away from alcohol and to take better care of himself.  Just as I am finishing this blog, Alberto stopped by to rest in the shade (it is very hot today and with his crutches he can't walk very fast) and to play a game of dominoes.
We'd love to hear from you via email:
carmodyfamilyonmissions@gmail.com
If the Holy Spirit is nudging you to support us financially
so that we can continue serving those in need, please visit:
https://www.familymissionscompany.com/project/chris-and-karen-carmody/
or call Family Missions Company at (337) 893 - 6111.
Thank you and may God bless you and your family!
Labels: Alberto conversion friends with the poor