A Bit of Relief in the Midst of Despair by Karen

David Platt, author of the book Radical, turned our lives upside down (six years ago) when he asked us to really consider whether or not we were living the way Jesus calls us to live. Platt is bold and unafraid of challenging the status quo. He leads by example and lovingly admonishes those who wave the banner of Christianity while continuing to live lives of comfort and luxury. 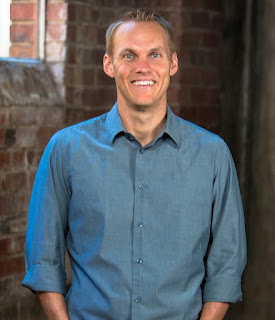 Is his message uncomfortable? Absolutely!!!
In a recent interview, Platt said, "One wealthy member in our faith family, while we were studying the Rich Young Ruler, told me I’m nuts. But then he said, 'I think you’re right. This is exactly what the Word teaches.' With tears in his eyes, this man said, 'I have reached the conclusion that I’m never going to stand before God and hear him tell me, ‘I wish you had kept more for yourself.'”
Inspired by Platt's bold conviction we do our best to live simple so that we can help those in most need.
When we arrived in Aguada we were welcomed by members of the church community who promptly informed us that this little town is known as "The Second Vatican", which piqued our interest.  If righteousness is the norm, we assumed that one would be hard pressed to find people in need....and yet....
The very first time we attended Holy Mass we noticed a poor man being shooed away by one of the ushers.  Before and after the service there was a small cluster of beggars outside the church who most avoided or rushed past.  When I sat down next to one of the men somebody sneered, "Don't give him any money.  He'll just use it for drugs!"  My heart sank.  All these people were just in church professing their love for Jesus, who of course loves the poor.  All these people call themselves Christians, and claim to follow Christ....and yet.....
Our friend, Nelson, is one of the men who frequently begs outside of church.  At 70 years old he's desperate and lost, but this wasn't always the case.  Before Hurricane Maria Nelson lived with his family in a small, but respectable home here in Aguada.  He helped out with the family business of making lemonade and selling it at carnivals and other festive events.  Nelson enjoyed the simple pleasures of afternoon naps in a hammock and playing dominoes with friends.  After the hurricane albeit destroyed the house, Nelson's family members left town to start over elsewhere.  Nelson, who seems to be a bit limited in his capacities, felt abandoned.  For six months following the hurricane the entire country was without electricity or potable water.  People were doing everything they could to just survive.  It seems that little by little, as the infrastructure was rebuilt, people's lives began to stabilize....at least most people's lives began to stabilize.   Nelson was another story.  All his life, Nelson's livelihood was making lemonade.  When that got swept away he didn't know what to do.  He told us that he looked for other work, but nobody was hiring.  I assume that Nelson would qualify for government assistance, but how would he even go about getting it?  During the hurricane all of his identifying documentation was ruined (birth certificate, driver's license, etc.) and he lives in a structure that's considered "uninhabitable".  His family members have been concerned only with themselves and the government agencies continue to struggle to meet the demands of the people.  What to do?  What to do? 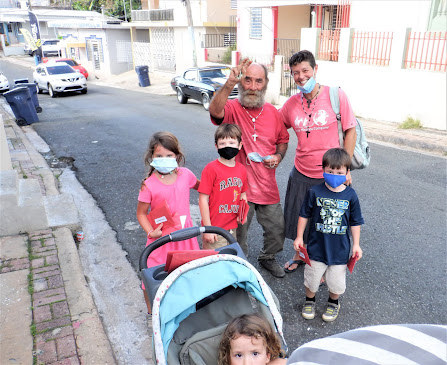 Back in December, when we did our Rosary Give-Away, we encountered Nelson in the street.
He was especially friendly that day and informed us that he lived nearby.  He described his house and invited us to stop by sometime...
...which we did.
This is Nelson's house.  I'm not sure if you can tell or not, but the second floor, which is where he lives, was destroyed by the hurricane.  Part of the roof was torn off and all the windows were carried away.  It is essentially a cement shell.  The bottom floor is actually in much better shape, but it is owned by Nelson's brothers who - although they have no interest in living there themselves - refuse to allow him to use the space.  The greed in this world never ceases to amaze me! 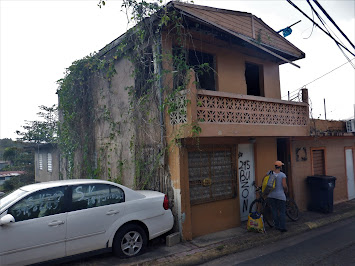 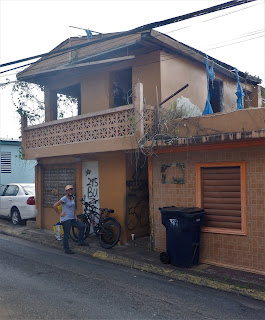 After seeing the state of Nelson's house we asked if we could return another day, with our kids, to help him clean it up a bit.  He laughed and told us that was pointless, but finally agreed that we could try.

A few days later we took a shot at tidying up.  Following are some pictures from that initial effort.  I'm happy to report that Nelson joyfully worked alongside us and was grateful beyond words for giving him hope. 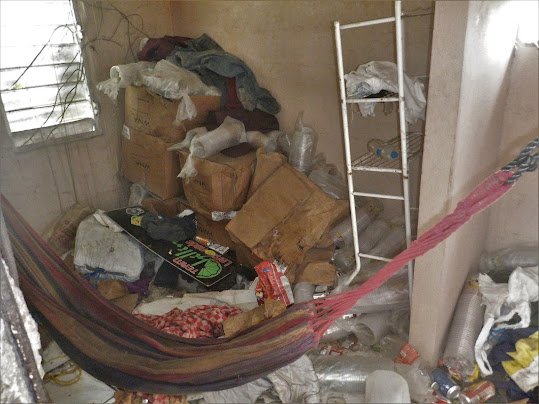 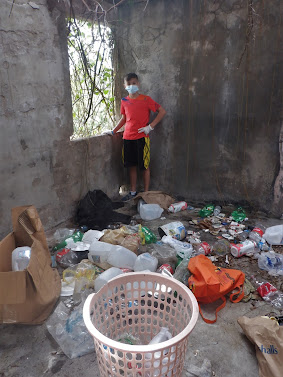 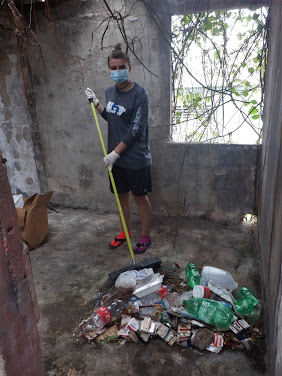 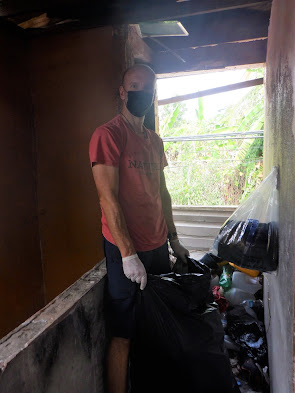 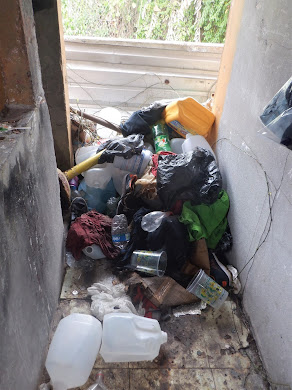 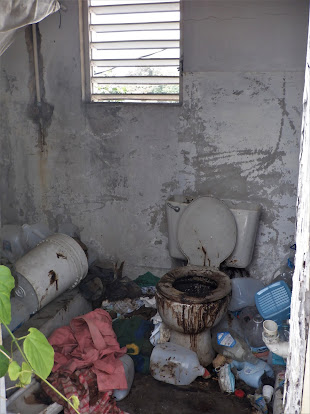 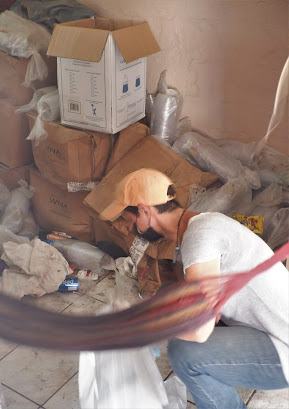 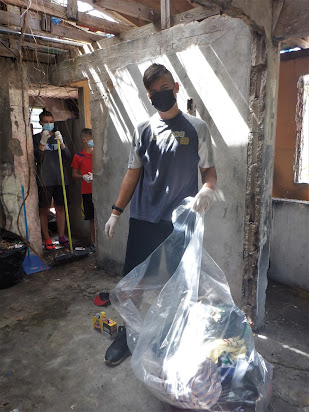 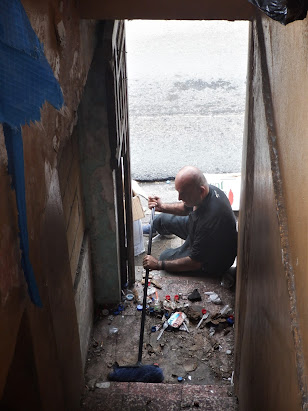 When we were getting ready to leave, after that first day, Nelson was so thankful.
It really warmed our hearts to see a twinkle in his eyes for the first time ever.
As we were cleaning up we gathered Nelson's (really, really, really) dirty clothes so that we could take them home to wash.   Prior to this it had never occurred to me that without water in one's house or money to buy toilet paper or laundry soap, clothes would get so dirty that burning them would seem more reasonable than trying to launder them.  I'm glad I didn't know what I was signing up for or I might not have offered. 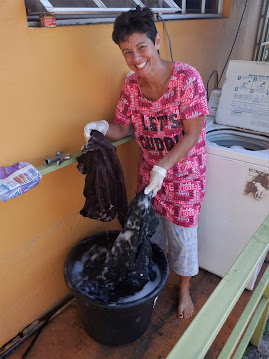 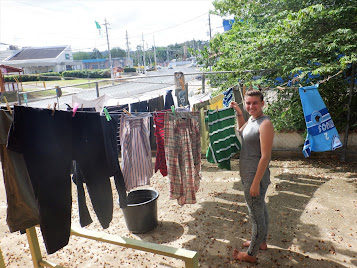 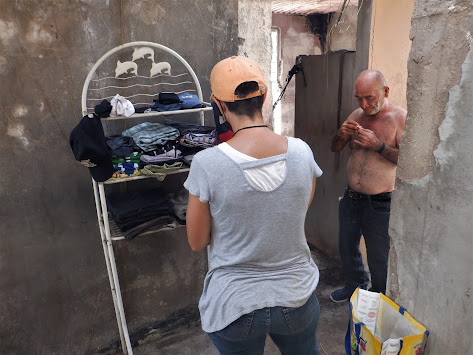 We're were super excited to take Nelson's clothes back to him.

We found an old wire rack in one of the piles of junk, cleaned it off and used it to organize his "new" wardrobe.

As I watched Nelson check out his new shelf, I got the impression that it's been a while since he's had clean clothes - not to mention a place to put them. 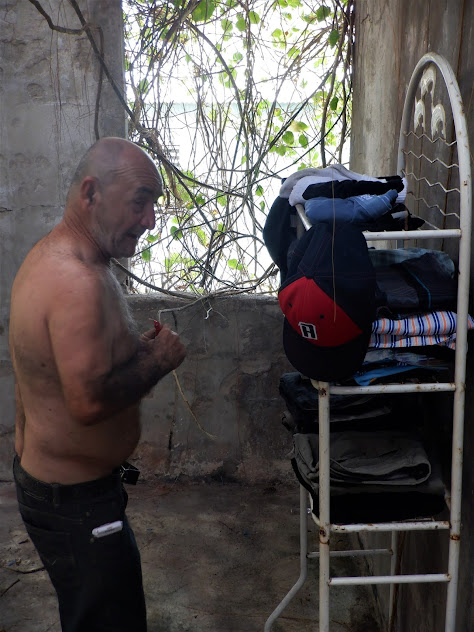 He was joking that he couldn't decide what to wear.  It was really cute!

After these initial encounters with Nelson we began visiting him at his home on a regular basis.

Sometimes we'd take him food and water, but other times we'd just swing by to have conversation.

I've made a habit of collecting up his dirty clothes and laundering them.

One day, I found an old hammock amidst the junk and asked if I could take it home to repair.  Nelson sleeps in a hammock, so it occurred to me that if he had two that I could rotate them out to wash, just like others do with bed sheets.  He just laughed at me and shook his head.  I  interpreted that to mean that I could take the hammock...so I did. 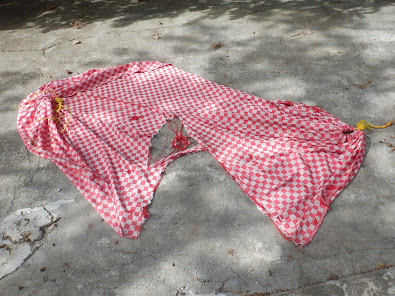 A friend of ours has an industrial grade sewing machine and told me that I could use it whenever I wanted.  I showed their son the hammock and asked if maybe I could take them up on the offer to use the machine.

Later that day I got a call from this family, asking if I could go to their house.  When I arrived, I was shown a brand new hammock that they had made for Nelson out of scrap material.  I was speechless.  The neighbor went on to share a bit more about Nelson's story and the tragedy of his situation.  They thanked us for coming to Aguada and for our desire to help people like Nelson.  In between tears I explained that my family and I are just the conduits of other people's love.  That has been the on-going theme of our mission.  We simply provide others with a means to share their resources and love with others who are in great need. 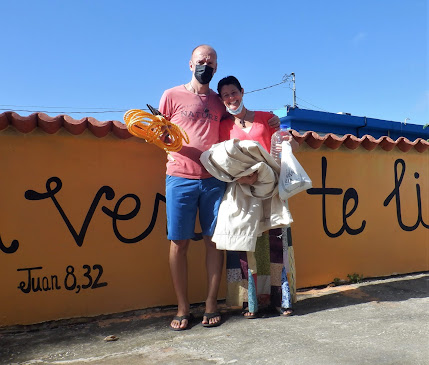 The next day we set out to take Nelson his new bed.  Chris and I were joking that "going to work" looks a whole lot different now than it did years ago when we wore pressed shirts and high end suits. 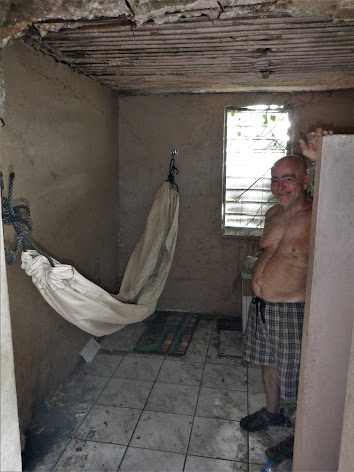 When we got to Nelson's we hollered up to him, but there was no answer.  His neighbor, Antonio, informed us that he'd left, but offered to help us install the new hammock.  With a little teamwork we got the old one down and the new one up.  While we were working, Antonio told us more about Nelson's family, which he'd known his whole life.  Being just two years apart, Antonio and Nelson grew up together.

Our family often talks about how "everyone has a story", and we remind each other that nobody has the right to judge anyone else.  As we listened to Antonio recount stories of days past, it really solidified our conviction that everyone's doing the best they can - even if it may not seem like it to others.

We didn't get to see Nelson's reaction to his new hammock when he first saw it, but we ran into him a couple days later and he was still smiling.  He told us "thank you" a thousand times and told me that if it weren't for the pandemic he'd give me the world's biggest hug.  We thank God for the opportunity to help Nelson feel Jesus' love.  We thank God that others have stepped up to help Nelson and pray that this small act of kindness will be the beginning of something life-changing for this poor, lost soul.

I appreciate your willingness to journey with us in this beautiful life of missions.  I humbly ask for prayers as we continue to seek the Lord each and every day!

We'd love to hear from you via email:
carmodyfamilyonmissions@gmail.com
If the Holy Spirit is nudging you to support us financially
so that we can continue serving those in need, please visit:
https://www.familymissionscompany.com/project/chris-and-karen-carmody/
or call Family Missions Company at (337) 893 - 6111.
Thank you and may God bless you and your family!