Where Should Poor People Live? by Karen

Where should poor people live?  This controversial question is cause for debate worldwide.  Studies show that low-income families do better when they are living among the more affluent in safe, stable neighborhoods, but according to an article I recently read in The Atlantic, "rich people don't want them around".  So, then what?
In 1974 the U.S. Department of Housing and Urban Development (HUD) established the Section 8 program which provides subsidized housing options for eligible tenants.  Although this seemed like a feasible solution to the dilemma of where the poor should live, the program quickly came under attack for seeming too costly and concentrating underprivileged families in high-poverty areas.  As we approach the 50th anniversary of this government program controversy remains.  In fact, just a few weeks ago when a large number of drug traffickers were arrested here in Puerto Rico the question was raised - Is subsidized housing the right solution to this difficult and complicated problem?
As a U.S. territory, Puerto Rico receives financial support to help families who are unable to afford suitable housing.  More specifically, we currently have 329 subsidized public housing developments, with a total of 54,002 units; three of those complexes are here in our hometown of Aguada.  Public records indicate that all 54,002 units on the island are occupied and there is an extensive waiting list of those hoping to qualify when space becomes available.  Our understanding is that most units house families of five or more, which would mean that about 10% of Puerto Rico's entire population lives in the projects (compared to approximately 1% in the U.S.).
According to a recent census report, the average annual income in Puerto Rico is $12,914 for an individual and $20,296 for a household (compared to $61,937 in the U.S)  To qualify for subsidized housing, a family here can earn no more than $5,980 per year.
A couple months ago we felt the Holy Spirit nudging us to do some sort of ministry in the projects right around the corner from our house, but felt a bit reluctant because of the anticipated "red tape" associated with government agencies.  We said a prayer asking the Lord to make straight our path if it was His will for us to deliver the message of His love to the people there...which He did.
Our initial request was to do a 1-hour, stand-alone program.  We imagined ourselves knocking on each door to invite folks to sing, listen to scripture and participate in a sharing....with the hope that maybe a few would show up... but that's not how it happened at all.  After talking with us about our mission and the work we've done these last 5 1/2 years, the director petitioned upper management in the capital city of San Juan for permission to make our family a regular part of their outreach programming.  WOW, WOW and WOW!!!  When we met with the social worker, whose caseload includes this complex, he explained that the executive staff in San Juan creates a schedule of themes which all 329 housing developments are expected to cover through various programming initiatives.  The hope is that we're able to explore these secular topics through the lens of our Christian faith.  The theme for April is the prevention of the maltreatment of children by others living in their homes: parents, grandparents, older siblings, relatives.   The social worker at the complex near our home explained that a program which helps kids understand their value/identity as beloved sons and daughters of God would be wonderful.  He said that there is a gross shortage of adults who understand the importance of acknowledging kids' positive attributes and affirming them for things done well.  As a result, many of these kids have low self-esteem which leads to a whole host of problems.  As we were talking I couldn't help but think that these kids' difficult circumstances probably cause many of them to question the very existence of God, which is a problem in and of itself!
Yesterday we did our first program.  Given the government regulations associated with covid-19 the social worker was only able to invite 10 kids, but that was totally fine!!  We began with prayer, introductions and some dinamicas, which are worship songs that have accompanying movements. 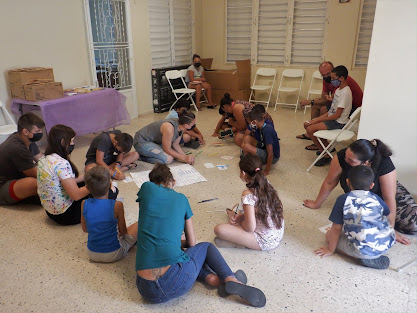 Then, we helped the kids identify positive personal characteristics that attribute to their awesomeness and wrote them on a framed picture we created with each of their names.  They seemed really grateful to have these keepsakes to display in their homes. 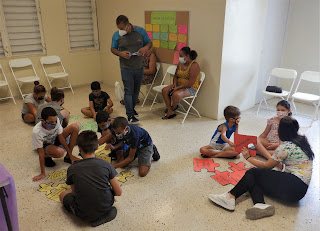 Next we talked about things that kids do which separate them from the Lord as well as things they can do to draw closer to the Lord.  To reinforce the importance of making intentional decisions which help us to live the way Jesus calls us to live, the kids worked in teams to assemble large puzzles that we had made in advance.  Each puzzle piece had writing on both sides.  One side described an action which helps us grow in holiness and on the other side was something that causes division and hardships in families.  After placing all the positive actions face-up the kids figured out how to fit the pieces together.  They enjoyed the activity so much that some of them asked if they could take the giant puzzles home to have their siblings and/or neighbors do them.  As I disassembled our big puzzles and gave them to the kids who had asked for them I was filled with joy at the thought of our message being passed on to those at home - that you JESUS!!! 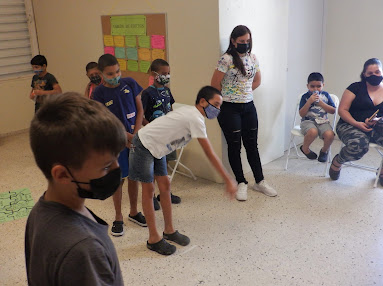 Our last activity was a lot of fun.  We wrote all the negative actions, which separate us from others, on plastic cups and made a pyramid with them.  Then, each kid had the chance to knock all the cups down by throwing a ball across the room.  We encouraged them to destroy the things that separate us from God and others, which they got really excited to do.
Thanks to the incredible generosity of Team Carmody, we were able to end our program by giving each kid a healthy snack (juice and trail mix) as well as a bible.  When the kids saw that we had snacks to share they got excited, but when they realized that we were giving them each a bible to call their own, they got really, really excited.  I am forever grateful for all those that have donated to our mission so graciously!!
After all the kids left the social worker expressed his tremendous gratitude for "a job well done".  We could tell that the kids had a great time and we all are looking forward to our next program in May.  Thank you Jesus for making straight our path.  I feel like this is just the beginning of a wonderful ministry that will bear great fruit!
Thank you for reading about our ministry in the housing projects here in Puerto Rico.
In HIM, Karen
We'd love to hear from you via email:
carmodyfamilyonmissions@gmail.com
If the Holy Spirit is nudging you to support us financially
so that we can continue serving those in need, please visit:
https://www.familymissionscompany.com/project/chris-and-karen-carmody/
or call Family Missions Company at (337) 893 - 6111.
Thank you and may God bless you and your family!
Labels: evangelization friends with the poor Karen kids Puerto Rico