I've always regarded Mother's Day as a beautiful opportunity to honor and celebrate
the mothers in our lives.

Prior to missions we celebrated Mother's Day over the course of the weekend so that we could spend time with Chris' mom as well as mine.  Some years we got really dressed up and attended fancy functions, like the annual Mother's Day Symphonic Brunch at the Detroit Institute of Arts; other years we'd relax at my parents' house playing yard games and enjoying cold lemonade on their deck. 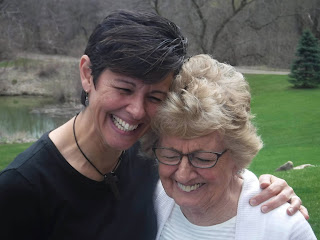 As we became more active in the Catholic community, we began participating in May Crowning celebrations to honor Our Blessed Mother.

During these ceremonies we'd pray the rosary, sing Marian hymns, ask for Mary's intercession regarding our prayer petitions, and present Her with a beautiful bouquet of flowers.

This is a photo of our girls at the Knights of Columbus' May Crowning event in 2012.

Since entering missions our Mother's Day celebrations have reflected the traditions of the respective cultures in which we've lived, and this year was no exception.

Each Sunday we do street ministry in the neighboring town of Aguadilla.  The corner where we meet tends to attract the local drug dealers, addicts and prostitutes.  On the Sunday prior to Mother's Day, as we were leaving, one of the women reluctantly asked, "You're not coming next week are you since it's Mother's Day?"  Without giving it a second thought I replied, "Of course we're coming.  There's nobody here in Puerto Rico that I'd rather spend Mother's Day with other than my kids and all of you!"  Despite the social distancing mandates, she leaned forward and gave me a great big hug. 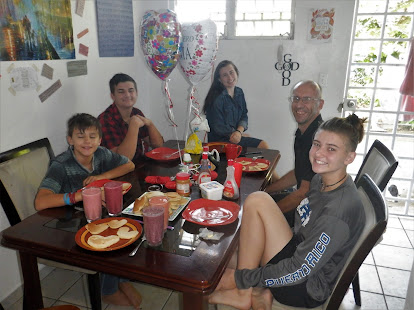 So, on Mother's Day, after enjoying the wonderful heart-shaped pancake breakfast that my kids made for me...

...we headed to our favorite corner to wish the mothers there a very happy Mother's Day. 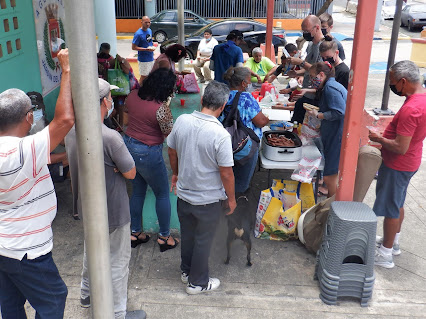 Given our late arrival we decided to begin by serving food.  This was unusual because we always begin by singing worship songs, reading scripture, and facilitating a discussion. 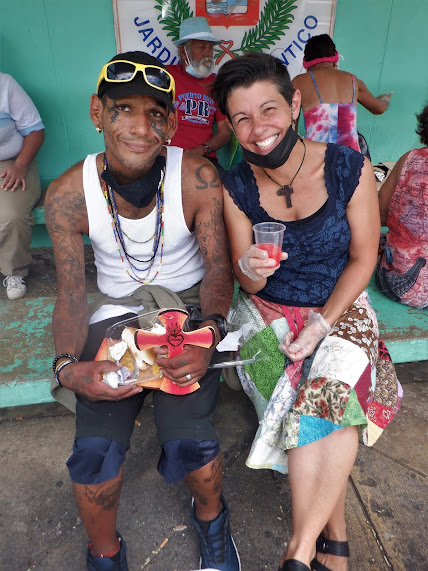 While everyone was eating I had the chance to talk with a man who has been feeling especially lost these days.  Each time I referenced a verse in the bible he would correct me by reciting the verse word-for-word, and many times reminded me what book, chapter and verse I was thinking of.  When I asked him how he knew his bible so well he explained that he grew up in the faith, but fell away during young adulthood.  He got mixed up with a bad crowd and has been struggling ever since.  As we talked about the Lord's love for him he started crying and told me that he misses going to church.  He misses the feeling of peace that he used to feel sitting in the pews.  He missed receiving Jesus in the Eucharist.  Before he left (with a hand-painted cross, a bible and a rosary compliments of Team Carmody) he thanked me for the much needed reminder and promised that he would get to Mass soon.  I'm not sure if this poor lost soul will find his way or not, but I know that he felt the love of Jesus for the first time in a while.

After eating lunch, the moms went back to drinking, smoking and carrying on with no regard for the fact that Katelyn wanted to read a passage from the bible and share her reflection.  She tried, on several occasions, to politely get their attention, but they were too strung out to care.

When I sat down next to them I overheard each one bragging about how her kids had sent her the fancy clothes, shoes and perfume that she was wearing.  These women also spoke about loving phone calls that they had received earlier in the day and of other gifts that arrived at their homes: flowers, cards, chocolates.  Recalling that most of them haven't spoken to their adult kids in years I was confused.  One of the men nearby rolled his eyes and explained that it's the same thing every year: leading up to Mother's Day these street walkers work extra hard to get the money they need to buy themselves new outfits so that they can spend Mother's Day spinning tales which tell of the things they each wish their estranged, adult kids would have done for them.  "They're all lying and they all know it, but somehow it makes them feel better." he said.

Although this was all really sad and disappointing, it helped our kids to better understand the complicated nature of some parent/child relationships and why some people prefer not to spend time with their mothers on Mother's Day. 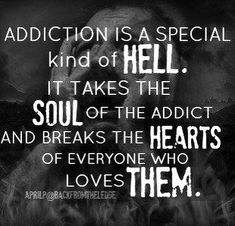 Next up on the docket was giving each of the mothers one of the wooden crosses that members of Team Carmody had sent us.  Trying to be strategic, we set out all the crosses so that they could see the gifts that they were going to receive.  As planned, this got their attention.  I spoke to all of them about how difficult it is to be a great mother.  There are so many challenges and pitfalls, and since children don't come with instruction manuals it can be albeit impossible to know what to do when the going gets tough.  I reminded them that none of us are perfect mothers, and that none of our mothers have been perfect because we're all fallen, sinful creatures. 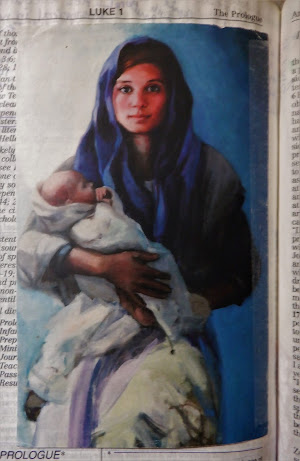 I showed them my favorite image of Mama Mary, which I have taped in my bible, and reminded them that the ONLY perfect mother is our Heavenly Mother, whose love for us is immeasurable, unconditional, and beautifully pure.  I spoke about the comfort I feel knowing that Mary is always petitioning on my behalf, and explained Her desire for each of us to draw ever closer to her son, Jesus.
Although I wanted to say more, I realized their limited attention spans were making it difficult for them to focus. We ended with a short prayer asking Mama Mary to pray for each of us, for our own mothers and all our children, especially those with whom we have strained relationships. The twinkles in their eyes told me they understood at least a little bit of what I had said. After bowing my head and crossing myself they jumped up and hurried to the table to choose which crosses they wanted. After everyone got one we allowed them to take one or two extras for their mothers and/or daughters. 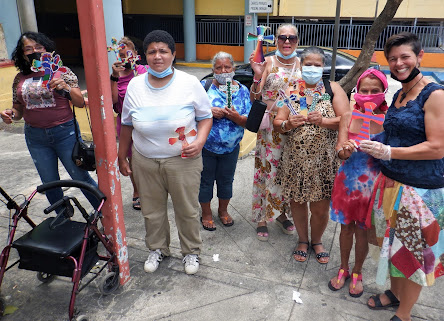 Chris invited the men to choose an image of Our Blessed Mother and spoke briefly about his love for Mary.  Thanks to members of Team Carmody, who sent us packages of prayer cards and such, they had a nice assortment to choose from.
Before we left a man named Ivan, who we see almost every time we go to this particular corner, approached me with a big smile.  He patted my back and said, "My mom died a long time ago and so did my wife.  We never had any kids so there aren't many moms in my life.  I think you're my favorite mom so I got you a present." 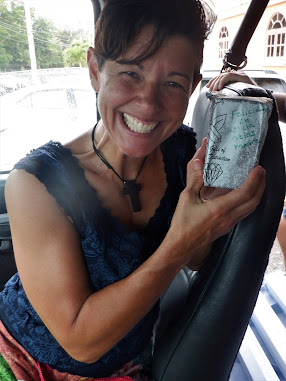 I was going to open it, but he told me to wait so the other moms didn't get jealous.
It was a bottle of perfume that I'll make sure to wear when we do our street ministry in Aguadilla.
In effort to maintain a healthy balance, we bid everyone farewell and headed south to enjoy the Salt Flats.  Since we arrived late we couldn't use the observation tower or read any of the information provided by the national park service, but we found an unlocked entrance and decided that a self-guided tour would suffice. 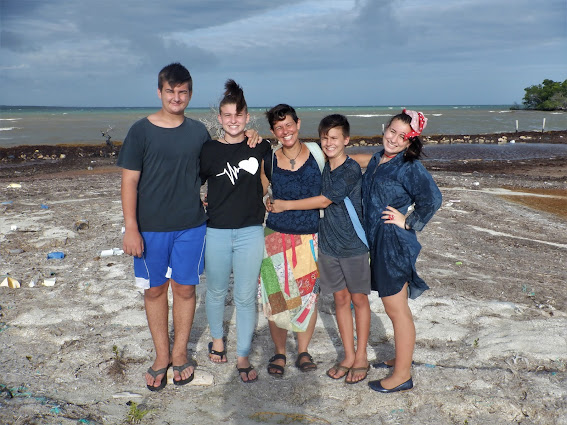 I thank God for my incredible mom.

and for helping me to be the best mom that I can be.

Mary's love for each one of us on this very special Mother's Day.

And I thank you for journeying with us in this life of missions!