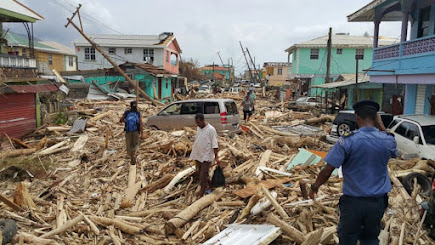 Many know that 4 years ago Hurricane Maria destroyed the island of Puerto Rico.  In the days immediately following the tragedy, news reporters attempted to capture the devastation by showing footage of flooded communities and fallen structures.  For months there was a steady stream of people passing one another in the airports: tens of thousands fled the island in search of a new life elsewhere while others were coming to the island to provide whatever assistance they possibly could.  We've read about how the power grid was obliterated, leaving everyone without electricity for six months following the storm.  We've heard stories about how countless people who needed dialysis or refrigerated medicine died because there was no electricity.  Without access to potable water, many contracted diseases which quickly took their lives.  The death toll for Hurricane Maria has been recorded as 4,645 which means that this hurricane killed more people than Hurricane Ida (in 1989) and Hurricane Katrina (in 2005) combined. 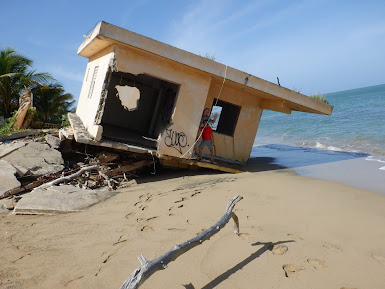 In August 2020, when we arrived to Puerto Rico we saw evidence of the catastrophe, but the vines growing through the windows of abandoned buildings and over the piles of rubble that will never get cleaned up don't tell the whole story.

After living here for over a year, we're just beginning to understand the real impact that Hurricane Maria had on the lives of the people.

Surrounded by hopelessness and devastation, many turned to drugs and alcohol for relief; the substances, which were meant to be a temporary escape, quickly began to enslave them in what would become debilitating addictions.  The incidence of domestic violence, which has always been high, skyrocketed as people crumbled under the weight of the stress.

People's homes were destroyed and there were no resources available to repair them; not lumber, hammers, cement or even trash bags.  There was a blanket of debris covering the rubble and everyone knew that garbage trucks wouldn't be coming around any time soon.  There was no potable drinking water available and the supply of food had been washed away.  This left parents unable to console their hungry, crying children.

All of people's belongings were either gone or ruined and there was nowhere to buy anything new.  Every possible means of gainful employment instantly disappeared, leaving people completely helpless.  Amidst this pursuit for survival, marriages fell apart and families were scattered.  Life, as they knew it, had forever changed. 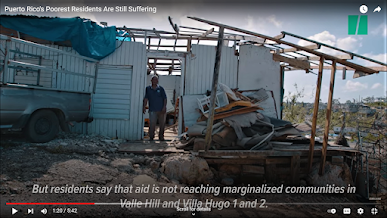 Here is a short YouTube video which illustrates the state of affairs two months after the hurricane: https://youtu.be/4I9HVV3oAH0

About a year ago, when we began doing ministry in Aguadilla, we met a man named Joe.  He was friendly, talkative and willing to participate in our activities, so we became acquainted quickly.

(As a side note, Joe absolutely loves to play the guitar and jumps at every opportunity Chris gives him to join in when we're singing praise and worship.  It's beautiful to see his face light up as he strums the strings and bellows the lyrics of the songs of his past.) 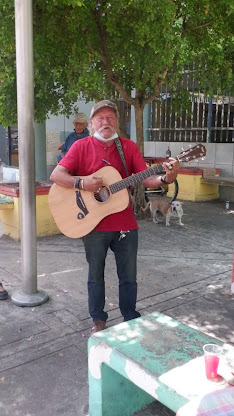 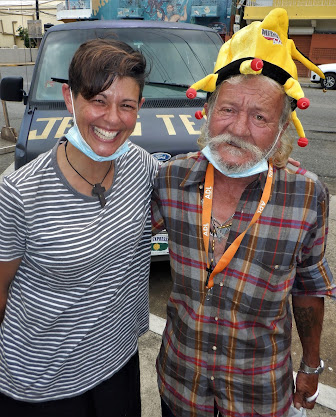 As the weeks and months passed we learned bits and pieces of Joe's story.  He was married, but his wife left him.  He refuses to entertain the idea of looking for another wife because he's still in love with the woman he married almost 50 years ago.  He has children and grandchildren, but he says that they all hate him.  He lives alone and spends his free time reading.  He went to college for psychology and served in the U.S. military.  Joe can always be found hanging around town drinking and/or sleeping on a bench under a shady tree. 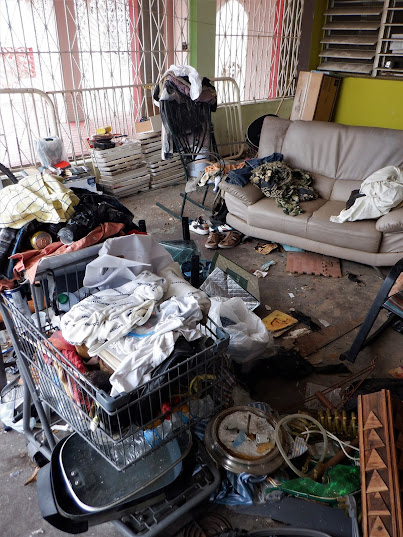 A couple of weeks ago we left home with the intention of cleaning the house of man we've recently met; however, it seems the Lord had different plans.  We arrived at the man's house, but he wasn't there, so we decided to head into Aguadilla to see if anyone there needed our help.  Joe reluctantly admitted that he could probably use some help.

We began in the space outside his house which was designed to be a garage.  Joe uses this space as a sitting room and said that he often sleeps there at night because it's so much cooler than in the house.  We set to work sorting through the stuff that was haphazardly strewn about. 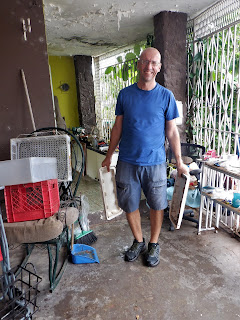 It was important that we kept Joe involved as not to mis-categorize something as trash, for example, that Joe intends to use or something that has sentimental value.
When we arrived we noticed a collection of toilet tank tops.  When we asked Joe about them, he lit up and explained his dream of using them to create a sculpture which he hopes to attach to the wall with caulk.  Who would have guessed?  So, Chris took them inside and carefully stacked them against the wall of a back room.

The (many, many) books went in one pile while the dirty clothes went in another.   Chris assessed any/all medicine that he found and arranged it neatly inside so that Joe doesn't have to run to the pharmacy every time he has a headache or cough. 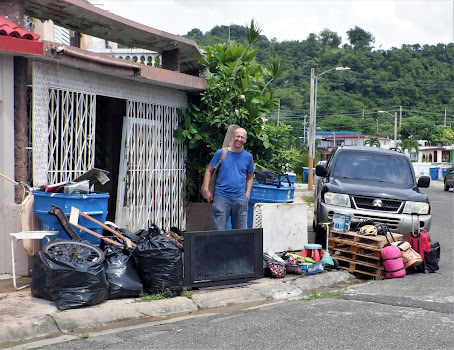 The items that were salvageable, but that Joe didn't want, were set outside his gate in a pile for others to take, and the garbage got bagged up.  Little by little we made progress. 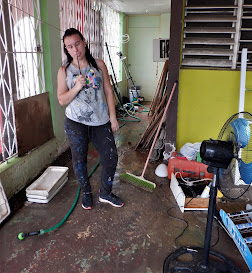 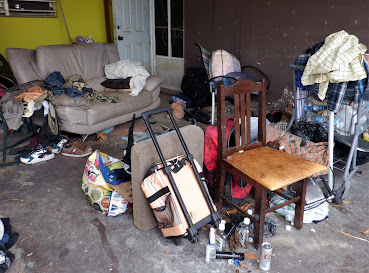 After cleaning up the garage area we moved into the front room of the house which is the only room of the house that Joe uses.  The other rooms have an assortment of items which survived Hurricane Maria, but never got reincorporated back into Joe's life.  I was too busy working to think about taking a "before" picture of Joe's front room, so you'll just have to imagine that it looked similar to the outside garage area.
Here are some "after" shots which show how we arranged his belongings and tried to make it a more dignified space to live.  Joe is a musician, so we lined up his guitars and found a chair to put in front of the keyboard that one of the U.S. veterans gave to Joe on his way out of town. 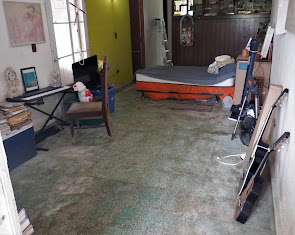 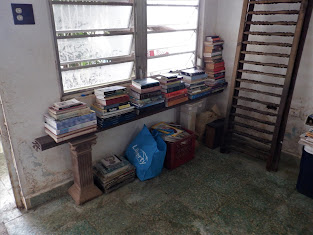 Before we left Joe sent me into his house to find something.  As I looked around my heart sank; four years after Hurricane Maria and there are still water-logged boxes of miscellaneous stuff piled in rooms that never got cleaned out.  The plumbing in the bathroom was destroyed during the hurricane, and it looks like it hasn't been used since.  Thankfully, Joe's neighbor allows him to use his water to bathe himself. 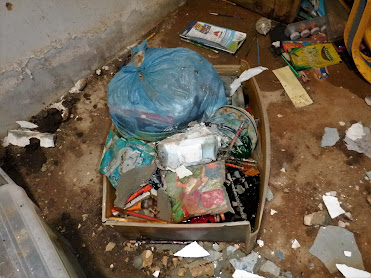 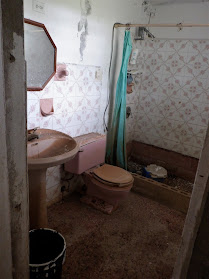 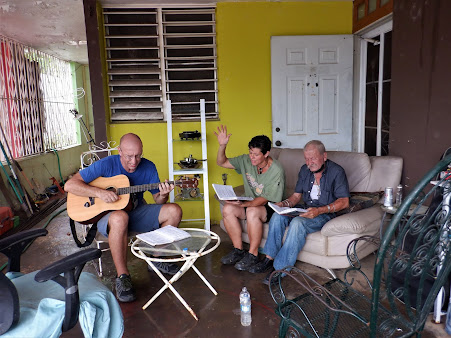 When we were all done cleaning, it was time to relax in Joe's new living room and enjoy some music.
Chris played for a while and then Joe took a turn.
Click on the image below to launch the video clip of Joe singing for us.
In between songs we learned more about how Hurricane Maria destroyed Joe's life.  These past four years he has become a horrible alcoholic and struggles to find the will to get out of bed each day.  A couple of months ago Joe told me that he wishes he would have died during the hurricane.   Getting to know him has helped me to better understand the real impact of Hurricane Maria; the devastation, not just to buildings and roads, but to people's lives.  Before coming to Puerto Rico I never thought about the possible long-term effects on the survivors: depression, addiction, divorce, manifestations of post-traumatic stress disorder, domestic violence, and unemployment to name only a few.  I never thought about just how hard it would be to rebuild my entire life, especially if all of my loved ones moved away.  I'm ashamed to admit that I never really thought about all the pain and suffering that lingers long after the storm has passed.   Now that I'm aware, I feel even more convicted of the need to bring Jesus' love to the people of Puerto Rico; to help them rise up out of the darkness and claim victory.
In the past I've heard people talk about the difference between a "victim" and a "survivor".  Here's one explanation that I found:
A victim is defined by the harm that has come to them;
a survivor is defined by their life afterwards.
A victim has been destroyed and mistreated;
a survivor has continued to live and prosper despite having been victimized.
A victim is powerless, at the mercy of others;
a survivor has reclaimed their power.
I strongly believe that the language we use has a significant impact on
how we view ourselves and the world.
Using the word “victim” to describe someone diminishes their strength and resilience.
It keeps focus on their traumatic experiences
instead of everything that they have accomplished since then.

There is an 8 minute film that captures a glimpse of the hardship that people faced in the aftermath of Hurricane Maria, but more importantly the filmmaker expresses a sense of determination to overcome and thrive.... as the Puerto Ricans have always done.

Watching this video has given me a new appreciation for all those that have chosen to stay and rebuild - not just the buildings, roads and bridges, but their very lives. 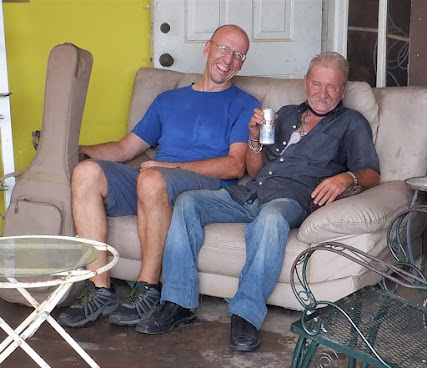 Please pray for my family and me as we continue to seek out those who are in most need of Jesus' love.
Please pray for Joe, that he's able to find purpose and peace.
God bless you, Karen
We'd love to hear from you via email:
carmodyfamilyonmissions@gmail.com
If the Holy Spirit is nudging you to support us financially
so that we can continue serving those in need, please visit:
https://www.familymissionscompany.com/project/chris-and-karen-carmody/
or call Family Missions Company at (337) 893 - 6111.
Thank you and may God bless you and your family!