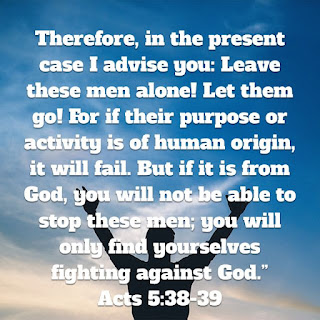 When the Lord called our family to missions back in 2015 we responded with a messy mix of emotions: anger, disbelief, wonder and awe, fear, anxiety.  The most prominent feeling was that of uncertainty.  Walking away from everything we had worked so hard to obtain was a huge decision.  How could we know for sure that this was in fact the Lord's plan for our family?

We consulted a local priest who directed our attention to Acts of the Apostles 5:38-39.  He assured us that if this whole notion of becoming missionaries was something that we had concocted, it would fail.  If it was from God, it would propel itself forward with divine momentum.  He encouraged us to be attentive to the trajectory of the initiative.  If it felt like we were swimming upstream against a raging current and nothing was working out, perhaps the idea was of human origin.  If the pieces just effortlessly seemed to fall into place, then there was a good chance that missions is what the Lord desired for us.  The very next day we received explicit affirmation that we were to become missionaries... and the rest is history.

So, what does all of this have to do with evangelizing through public artwork?  Well, when we arrived in Puerto Rico in August 2020 there were many restrictions in place to help prevent the spread of covid-19.  As such, our opportunities to evangelize were limited.  Missionaries all around the world had returned to their passport countries because they felt there was nothing they could do abroad.  As we prayed, we begged the Lord for guidance.  If He wanted us to step out of missions until the pandemic passed, He needed to make that crystal clear.  If He wanted us to stay in the field, He'd have to give us something to do.  Unbeknownst to us, a friend of ours was also praying for the Lord's guidance during this time.  It seems that the Holy Spirit simultaneously answered both of our prayers.  Our friend felt inspired to raise money for our mission, and we felt called to evangelize with public artwork since there weren't any regulations prohibiting the beautification of the community.  So, we used the money that was donated to buy a whole bunch of paint and painting supplies.  Following are some photos of the more recent projects that we've done.  Beneath the photomontage is a story about how this initiative impacted one particular man who has been feeling unwelcomed by the church.

There is a retaining wall on the thoroughfare into Aguada that has been covered in graffiti for years.  We painted it to match the veterinarian's office directly across the street.  While we were working on this project countless people stopped to thank us for beautifying their community. 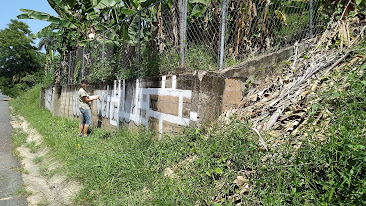 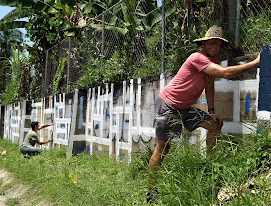 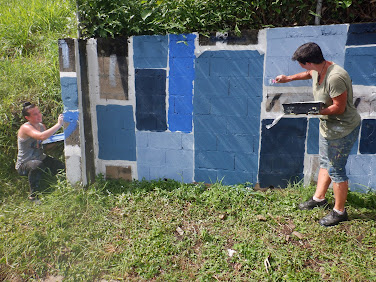 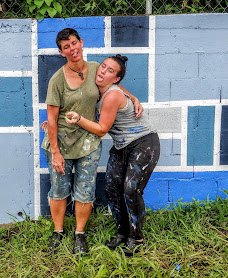 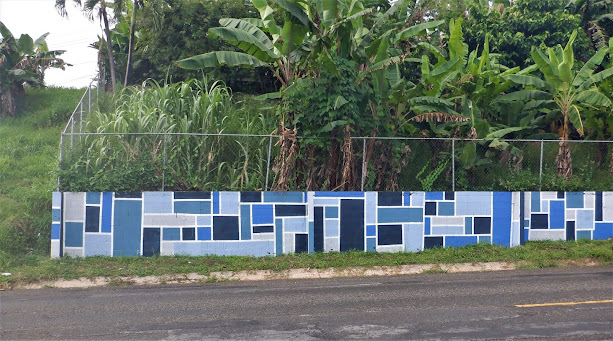 There is another thoroughfare into the center of town which is often bumper-to-bumper with traffic. On that route lay a dilapidated house surrounded by an ugly retaining wall.  The owner of this property has lived in the United States for over 15 years so we concluded that s/he wouldn't mind if we brightened it up a bit.  After everyone got done painting the colorful geometric shapes I added the phrase "Never Forget...Jesus Loves You Exactly as You Are!"  The impact that this project had on the passersby was incredible.  Every tenth car or so slowed down to acknowledge my efforts with happy honks, waves, and/or big smiles. Several people stopped to comment on how much friendlier the neighborhood feels, and three people, in particular, got out of their cars to thank me personally - not just for our hard work - but for having the courage to proclaim Jesus' love at a time when the public persecution of Christianity has become socially acceptable. 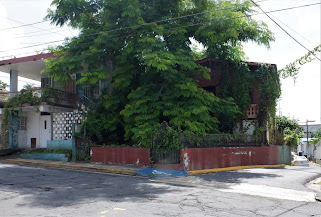 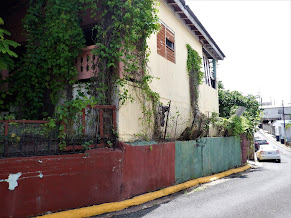 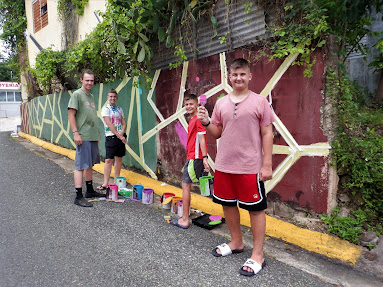 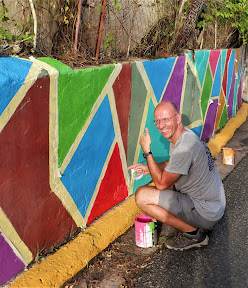 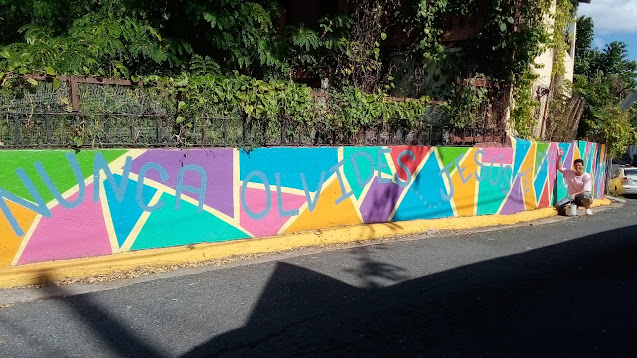 The corner park shown below was cluttered with graffiti and it really seemed to affect the overall mentality of the people who gather there on a daily basis.  Our intention was to add "Jesus Loves You" but we ran out of time.  Perhaps Katelyn will be able to add this special touch in the future. 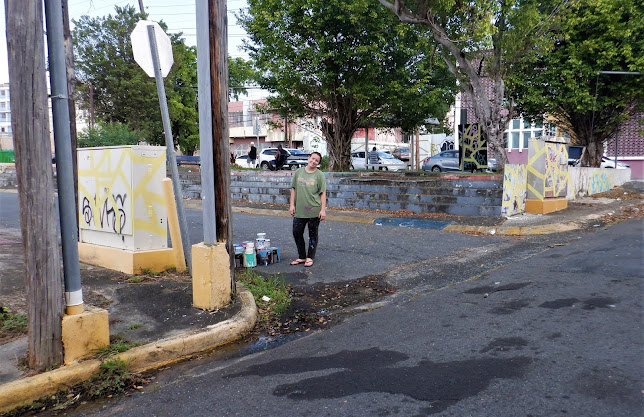 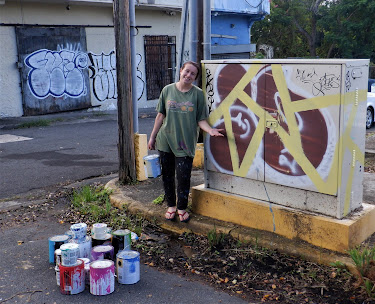 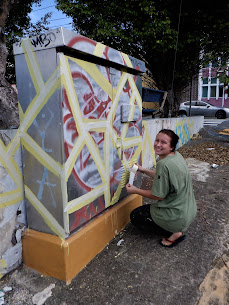 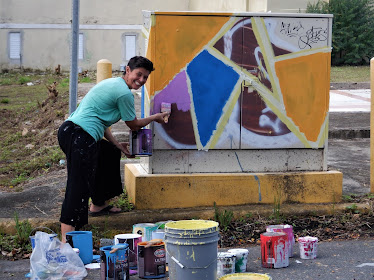 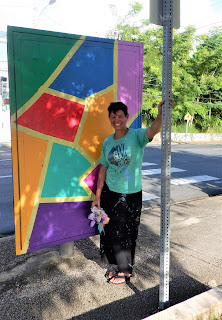 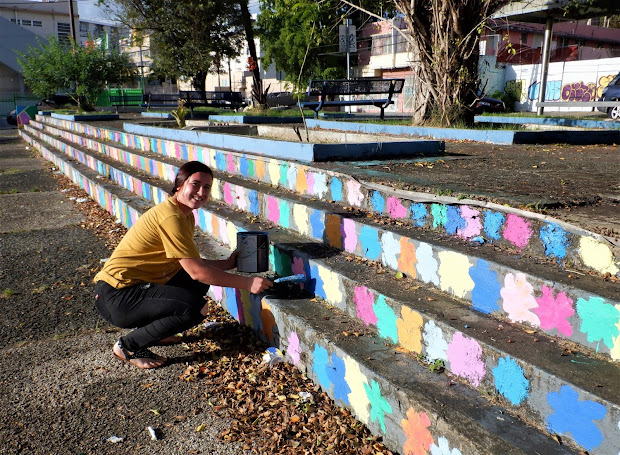 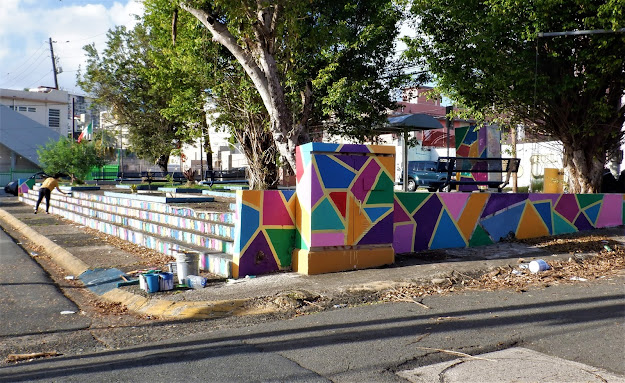 There is a gentleman that we've come to know that loves the Lord with all his heart.  When he invited us into his home I was struck by the display of religious imagery.  He talked about how comforting it is to have these reminders of Jesus' love, as well as the love that Mama Mary has for all of us, and how desperately she desires to help each of us draw ever closer to Her Son.  There are images of St. Joseph as well as the Holy Family.  Miguel has created this personal, mini sanctuary of sorts because he doesn't feel welcome at church.  He said that ever since the community realized that he's living a homosexual lifestyle they've shunned him.  The few times that he's gone to church, he's felt as though people were whispering about him and refused to greet him or chat after the service.  When we were painting the wall directly across from Miguel's house I was given permission to paint "Jesus Te Ama" which translates to "Jesus Loves You".  However, when I prayed about this project the Lord gave me something different. 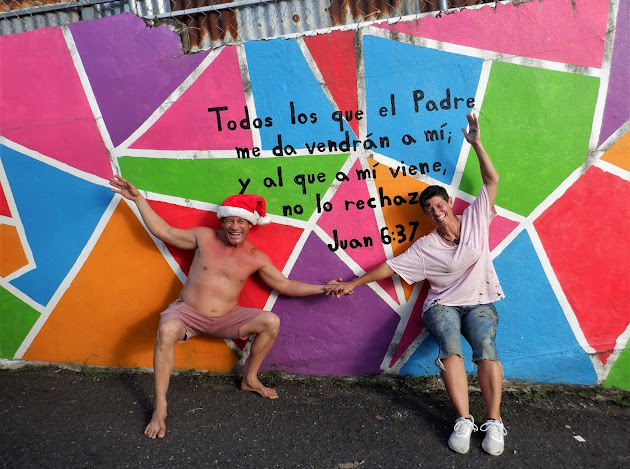 John 6:37.... John 6:37.... John 6:37
Every time I prayed about what I was supposed to do on the wall by Miguel's house the Lord directed my attention to John 6:37, which says, "I will not reject anyone who comes to me."  I went to Miguel's house and the woman who owns the property across from him (who is actually his sister) was standing outside.  I explained my situation and shared the idea of painting something different on this wall.  She scowled.  I think she likes how the other "Jesus Te Ama" messages have turned out in different parts of town and was looking forward to her own wall displaying such a message.  Anyhow, I'd like to mention that both of these individuals are Catholic because Catholics are not known for having scripture memorized by chapter and verse.  When I told her that I wanted to paint John 6:37 her eyes widened and became glossy with tears.  I confessed to not having this verse memorized in Spanish, but began giving a rough translation.  She interrupted me by reciting the verse word-for-word.  She called Miguel out and informed him that I wanted to paint a scripture verse on the wall in front of his house instead of "Jesus Te Ama".  He smiled his usual big smile and asked which verse.  When I said, "John 6:37", his smile changed to one of affection, his eyes twinkled, and a couple tears ran down his cheeks.  As I offered my rough translation, he too recited John 6:37 verbatim.  Miguel put his arm around my shoulder, glanced at his sister, and said they'd love for that verse to be painted on the wall so that everyone in the neighborhood would be reminded each day that Jesus loves ALL of His children and rejects nobody.  As Miguel hugged me I started crying.  I'm sooo glad that I didn't just paint "Jesus Te Ama" like I planned.  Thank you, Jesus, for helping me to be docile to the subtle movements of the Holy Spirit deep within my heart so that HIS will could be done and not mine.
I started this email by recounting briefly our call to missions and explained how the priest told us that if the call was truly from the Lord that nothing could get in its way.  If he was offering us his counsel during this time of coronavirus, I believe that he'd say that not even a global pandemic can hinder God's plans.  Our ministry this last year and a half has looked very different than it did pre-covid; however, there isn't a doubt in our minds that the Lord desires us to "keep on keeping on".
Thank you for taking the time to read about some of the things that Jesus has been doing through Team Carmody.  I humbly ask for prayers, that we're able to remain docile to the Holy Spirit so that in all things HIS WILL MAY BE DONE in and through us.
Peace be with you.
Love, Karen
We'd love to hear from you via email:
carmodyfamilyonmissions@gmail.com
If the Holy Spirit is nudging you to support us financially
so that we can continue serving those in need, please visit:
https://www.familymissionscompany.com/project/chris-and-karen-carmody/
or call Family Missions Company at (337) 893 - 6111.
Thank you and may God bless you and all those
you hold dear to your heart!
Labels: artwork evangelization love painting Puerto Rico