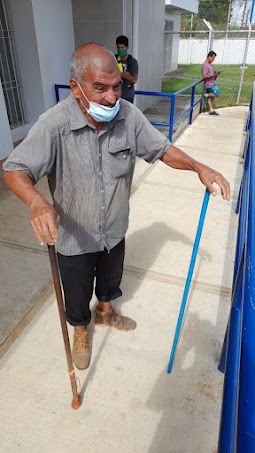 Days after arriving in Santa Rosa de Pocosol we encountered "Peligro" for the first time.  "Peligro" is the Spanish word for "danger".  It is also the nickname that was given to a man here in town that constantly wanders the streets begging for money in an aggressive way.  The vast majority of the time Peligro can be found outside the bank harassing people as they come and go.  The first time he approached me, I politely explained that I don't give people money.  "Then buy me food!" he demanded.  I told him that I'd be happy to buy him food and suggested that we go together to the little diner across the street.  When he refused, I suggested another place, but he insisted on staying by the bank.  After a bit of conversation and some investigating, I learned that Peligro isn't welcome in any of the local establishments, including the church restaurant, because of his history of violent behavior.  When asked to explain, Peligro shook his head and said, "Son malos, son MALOS!" which roughly translates to "They're really bad people!"  We refused to let the issue die.  Each time we saw him we'd greet him with a smile and engage him in conversation, hoping to understand how it came to be that an entire town full of people hate him.  Periodically, we'd buy him food or a cup of coffee and pray blessings over him, which mystified the townspeople who often warned us not to get too close.  Little by little, he let his guard down and we learned that he lives somewhere here in town, but I didn't know where.  He started asking if we'd buy him panels of sheet metal for a roof, but when asked if we could visit his house to see more specifically what he needed, he'd burst out laughing and tell us that he doesn't have a house.  It was all so confusing and suspicious.  Our relationship with Peligro kind of plateaued, until... 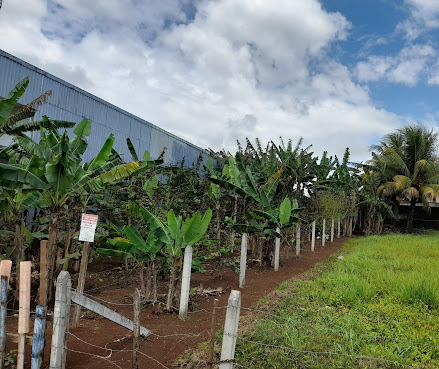 One day, as I was walking through town, I passed a little plot of land covered in banana trees.  As I glanced through the leaves, I saw someone sitting on a dirty overturned bucket next to a tiny shanty made out of scrap materials.  I bent down, hoping to see who it was, but the person got up and went inside.
As I continued walking I was acutely aware of the heaviness that had filled my heart.  "Nobody should have to live like that!" I remember saying to myself.  "Whoever it is, we have to help him!" 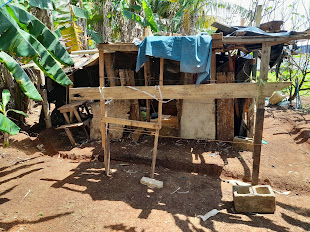 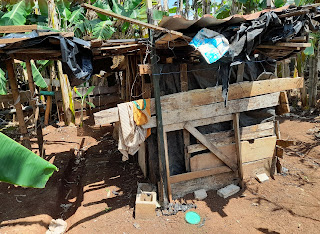 When I got home and shared my experience with Chris, I learned that the dwelling was made by Peligro, who is illegally squatting on someone else's land.  Although my heart felt broken, I could see that it was a complicated situation. 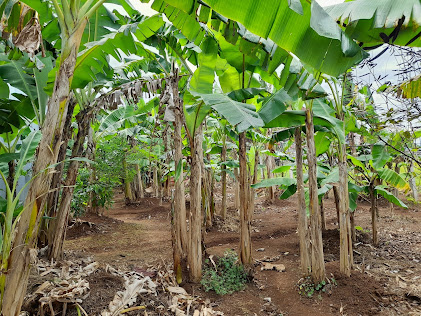 The following day, when I returned, I was welcomed in and given a tour.  I learned about the trees and bushes that had been carefully planted, the ditches that were dug to divert rainwater, and the construction of the hut.

Peligro was as proud as any homeowner who enthusiastically shows his guests the projects that he's done and is planning to do.   I affirmed him for all of his hard work and expressed my desire to help, but also made sure that he understood the complicated nature of the situation.  He assured me that the property owner left town long ago and has no intention of returning, which may or may not be true.  Regardless, I wanted to be clear that we needed the priest's permission before we could begin any home improvement projects.
Before leaving I asked if he knew that his nickname is Peligro.  Staring at the ground he grumbled complaints about the "malos" around town and then tried to change the subject.  I explained that the only way that anything would ever get better is if he and the others around town started acting the way that Jesus teaches us to act ~ with love, mercy, compassion, gentleness, and kindness to name just a few.  When I tried to get him to commit to changing his behavior he told me that he's mean to them because they're mean to him...and they have been for years and years.  I simply smiled and suggested we talk about it more another day.  We had made great progress on the friendship front and I didn't want to do anything to spoil that.  Before leaving I learned that our friend's name is Edrin. 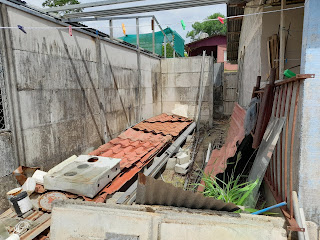 After receiving the priest's blessing, we were faced with the decision of what exactly to do.  In all reality, it seemed most logical to disassemble the collection of scrap materials that were connected with miscellaneous pieces of twine and wire, and just start over; however, that would be a horrible insult to Edrin, who had done his best to build himself a home.  When asked, he said that the biggest problem was the roof, which was made out of plastic bags and random pieces of garbage.  We felt reluctant to buy new pieces of sheet metal because they cost $16 each, which is an awful lot when the standard wage in our area is $20 per day.  As we brainstormed other options we remembered the pile of extra construction materials that has been laying next to our house ever since we arrived in November.  Our landlord is a builder and uses this space for storage.  Perhaps he would let us use some of the old pieces to improve Edrin's situation. 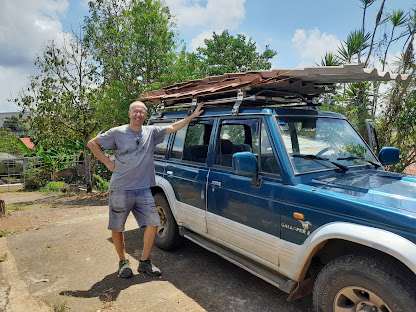 All praise be to God, we were given the green light to use all the old pieces of sheet metal and were on our way to Edrin's house just a few short days later.  When we arrived he was astonished to learn that we had enough for the roof as well as some of the walls.

We assumed that we'd take off the existing roof materials, but he was certain that the whole house would come tumbling down if we started taking things apart.  As the head engineer, he got to call the shots.  As such, we ended up putting the pieces of sheet metal on top of the existing roof.  We thought that we'd be nailing the sheet metal in place, but he was scared that all that vibration would cause his home to collapse.  So, we tied it in place just like he wanted. 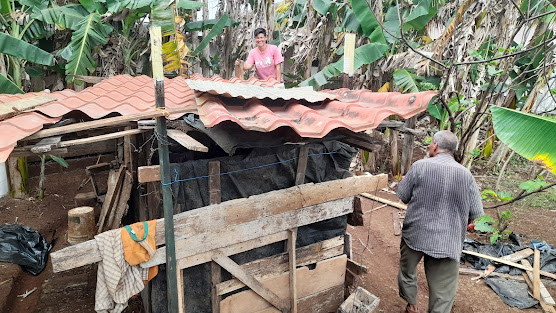 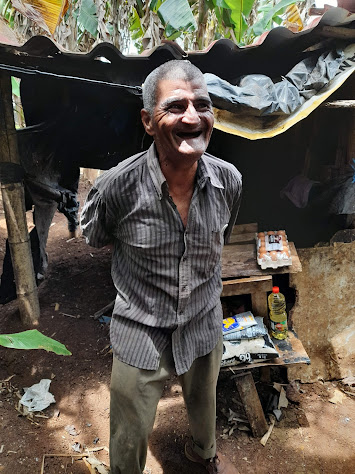 As we were working it started to rain.  Edrin ran inside his house and started giggling like a little boy, "It's raining and I'm not getting wet!"  Thankfully the clouds passed quickly and we were able to finish the job.  Before we bid him farewell Chris ran to the store to buy him some food.  Edrin was so happy that he couldn't stop smiling and laughing.  I tried to capture it on video, but my wet, shakey hands accidentally double-clicked the record button which means I have nothing cool to share with you.  I suppose you'll just have to look at the photo and imagine him exploding with excitement.

These past couple of weeks we've stopped in to visit Edrin two times; once to wish him a Happy Easter, and again to share scripture and sing worship songs together.  Each time we see him by the bank he looks the same as he always has, in fact, he's been wearing the same clothes ever since we met him in November; however, there's something different.  He's been smiling more and doesn't appear so angry.  The other day I saw him talking with another man and they were both laughing, which historically was unheard of. 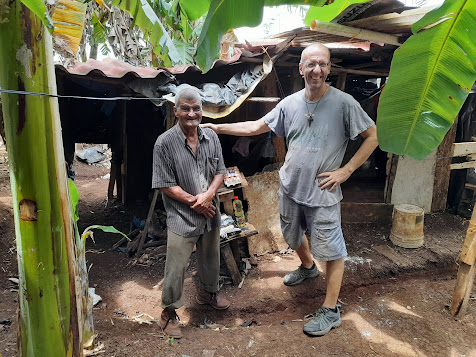 I'm not expecting things to change overnight, but I definitely feel hopeful that Jesus can help Edrin learn how to be a more amiable member of this community.

Following are some "after" shots of his renovated house: 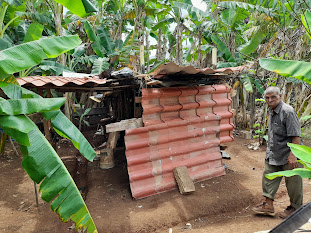 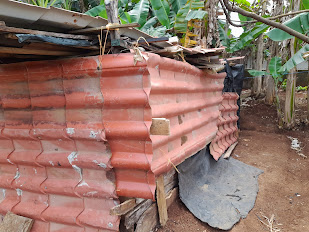 I humbly ask for prayers, that we're able to help the people of Santa Rosa de Pocosol grow in their faith as they come to see Jesus in Edrin, and that they're able to better understand that he is worthy of love not because of anything that he has or hasn't done, but because of who he is in Christ.
Our experiences with Edrin bring to life the teaching in Matthew 25:40-46 which says,
"And the king will say to them in reply, '
Amen, I say to you, whatever you did for one of these least brothers of mine, you did for me.'
Then he will say to those on his left, '
Depart from me, you accursed, into the eternal fire prepared for the devil and his angels.
For I was hungry and you gave me no food, I was thirsty and you gave me no drink,
a stranger and you gave me no welcome, naked and you gave me no clothing,
ill and in prison, and you did not care for me.'
Then they will answer and say,
'Lord, when did we see you hungry or thirsty or a stranger or naked or ill
or in prison, and not minister to your needs?'
He will answer them,
'Amen, I say to you, what you did not do for one of these least ones, you did not do for me.'
And these will go off to eternal punishment, but the righteous to eternal life."

I pray that you're able to see Jesus in each and every person you encounter this day.

We'd love to hear from you via email:
carmodyfamilyonmissions@gmail.com
If the Holy Spirit is nudging you to support us financially so that we can continue serving those in need, please visit:
https://www.familymissionscompany.com/project/chris-and-karen-carmody/
or call Family Missions Company at
(337) 893 - 6111.
Thank you and may God bless you and all those
you hold dear to your heart!
Labels: Costa Rica Karen street ministry