A Baby Shower in the Jungle by Karen

Have you ever helped plan a baby shower?  I have and I remember well some of the challenges associated with figuring out how to make the day the best that it could be for the expecting mom: 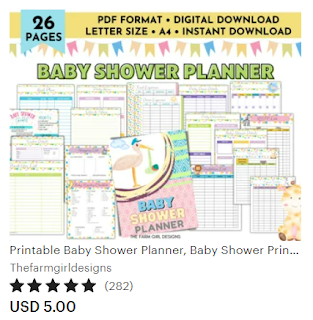 - where will it be located?

- who will prepare the food?

- how many games and which ones?

- should there be a theme?

- when is the best time to open gifts? 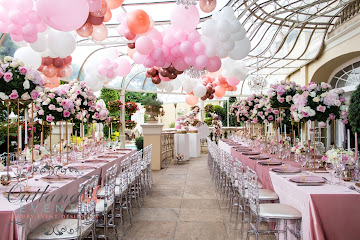 When my daughter, Anna, told me that she and some friends were going to throw a baby shower for a classmate's sister my mind filled with ideas about how we might help to make this day extra special ~ fun games, pretty decorations, and name tags (of course) to create a friendly atmosphere.  As I began asking questions I quickly realized that I was thinking about the first-world baby showers I had attended in the past.  Suffice it to say that a baby shower being hosted by a small group of teens in the middle of the jungle would be much different... and it was.

Anna agreed to bring a homemade cake and some sandwich fixings.  The other girls that we picked up on the way had some decorations.  Given the limited nature of their preparations, I assumed others must be involved, but that wasn't the case. When I asked what time it was supposed to start, I learned that it was a surprise baby shower, so it would start whenever the guests showed up.  "Do they know if it's going to be a boy or a girl?" I asked excitedly.  "It's a boy.  He was born two months ago."  I decided it was best for me to stop asking questions.  As I continued driving in silence I prayed for the grace that I would need to be whatever Jesus was asking me to be for these people, at this time. 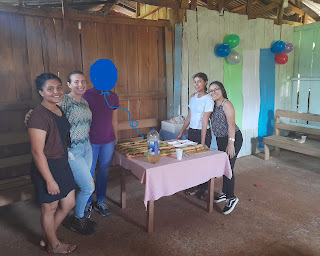 When we got to the home of the young new mother, who lives with her parents and ten siblings, it was obvious that she was not expecting us.  She went about her business, as did everyone else, and we just patiently waited outside until Anna's friend finally got home.  We went into an adjoining part of the house, which is a community church that her dad pastors, and began getting ready.  We hung up some balloons and put crepe paper on the wall so that there was a place for people to take pictures.  I offered to make some crepe paper flowers to make it seem a bit more special, but everyone agreed that it looked perfect just the way it was.  When we finished assembling the sandwiches the handful of family members that had arrived were invited to eat and the party officially started. 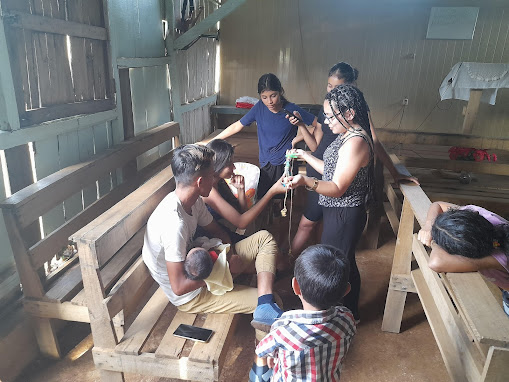 After lunch, we played a couple games.
The first one was a competition to see who could unclip as many clothespins as possible from a clothesline with only one hand.  It was challenging and fun.

The second game was a race to see who could feed another person a jar of baby food the fastest.  Anna and I were partners, so I had to lay across her lap and be spoon-fed, which was ridiculously silly!

The third game was a balloon race, which they played countless times because everyone was having so much fun. 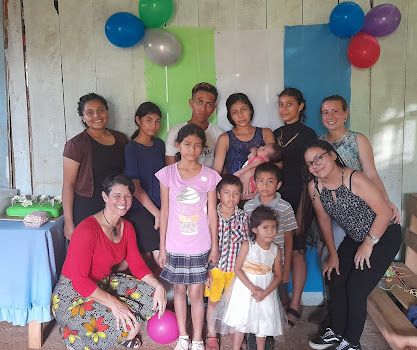 I was startled by the fact that the baby's parents sat off to the side the whole time looking like deer in the headlights.  As much as I wish it were different, I imagine there's probably a part of me that still expects people to pretend like they're happy even when they're not.  These two youngsters were disappointed by the arrival of their firstborn, angry that their youth has come to a screeching halt, exhausted from two months of sleepless nights followed by busy days of manual labor and high school coursework, and scared about what the future might entail... so why was I expecting them to act happy?

As the others were playing games I made my way to where they were sitting to affirm them for choosing life, despite the obvious challenges that lie ahead.  I encouraged them to make intentional decisions that could help strengthen their relationship and build a strong foundation for their family.  I spoke about the importance of keeping Jesus at the center of their lives, especially as the hardships come.  They listened respectfully but didn't seem to know how to respond.  I ended by praying a blessing over the three of them and encouraged them to let me know if there's anything we can do in the future to help.  They nodded and stared at the ground. 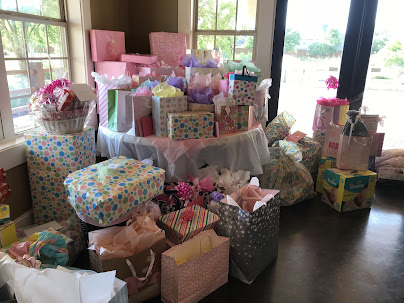 At no point during the baby shower were gifts given.  Prior to arriving, I asked Anna if we should bring a present.  She said that the family is extremely poor so it was unlikely that anyone would be bringing gifts; as such, the cake and sandwich fixing would be more than enough.  After talking with the young parents I realized that they are in desperate need of formula because the mom's own health is not good enough for her to be able to consistently nurse the baby.  So, the following day I dropped off a large canister of formula.  I have another large canister here at the house that I'll deliver in the coming weeks.  They were really thankful.

As we made our way home along the bumpy dirt roads I found myself lost in thought.  Initially, my heart was heavy because it didn't seem like the parents even enjoyed the party that was thrown for them.  As I continued reflecting, I realized how grateful I was to spend the afternoon with people who don't feel the need to fake anything.  The fact that this young woman had gotten pregnant when she did was certainly unexpected and would make life more challenging for all of them, but that didn't change the undisputable fact that they love her beyond measure and will do everything they can to help her in this next chapter of life.  This baby shower wasn't about the presents and it didn't matter that the parents didn't have fun.  This baby shower was an authentic celebration of life - a life that they've all received as a gift from God to share.... WOW!

In the weeks following the baby shower, we had the occasion to throw a couple parties of our own.  As we've done since entering missions back in 2015, we kept them simple and focused on the reason for the gatherings and not the gatherings themselves. 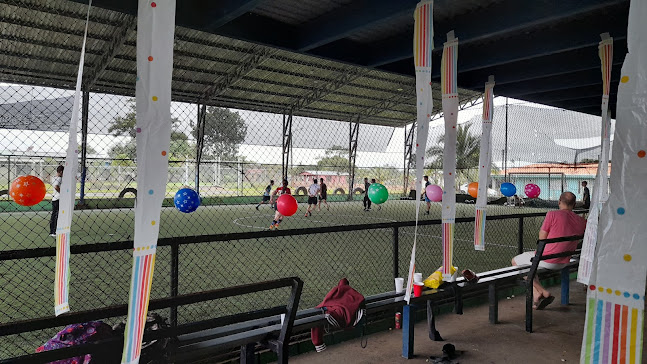 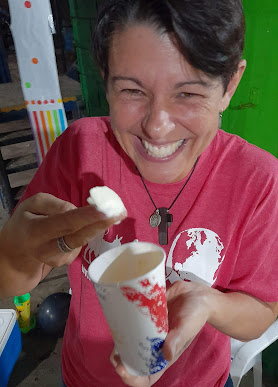 For Michael's 13th birthday we invited some friends to play soccer at the neighborhood court.  To decorate the space we cut up the birthday tablecloth which we had purchased for Chris' birthday a few months earlier and hung it from the ceiling.  We tied balloons to the netting and threw about 20 balloons all over the soccer field so that the kids had to play around them.  It was wonderful.

Afterward, we intended to serve cake and ice cream but didn't know what to do when we realized that the forks and plates had been misplaced.  Michael's friends told us to just put the cake and ice cream in the cups and they'd eat them together with their fingers.  At first, I thought they were joking, but they were totally serious and thought nothing of it.

When it came time to celebrate Anna's birthday we decorated our front porch and invited folks over for some simple games and dessert. 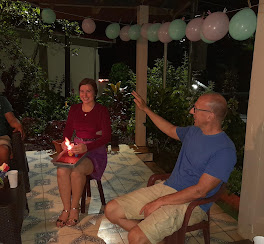 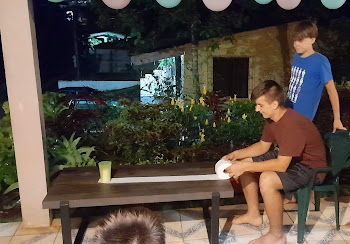 One of the highlights of the evening was an impromptu dance party that started when the kids all started doing a line dance together: 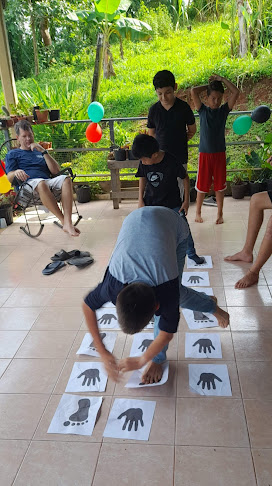 Just the other day we were invited to a friend's house to celebrate her husband's 50th birthday.
There was no pressure to create epic memories and it didn't seem like anyone had any expectations for what the day should entail.  We simply spent time together on their front porch, chatting and watching each other jump through a homemade Twister hand/feet sequence.  It was so simple and yet so enjoyable.
When we first became missionaries I had all kinds of ideas about the people that we were going to help, but the longer we do this the more I realize that they help me way, way, way, way more than I will ever be able to help them.
The people here may not have the resources to throw fancy parties, but they sure know how to make their loved ones feel appreciated and special.
I humbly ask for prayers that we're all able to remain docile to the Holy Spirit who continues to shape us into the missionary disciples that He wants us to be.  Thanks for taking the time to read a bit about what's going on here in Costa Rica.  Love, Karen
We'd love to hear from you via email:
carmodyfamilyonmissions@gmail.com
If the Holy Spirit is nudging you to support us financially so that we can continue serving those in need, please visit:
https://www.familymissionscompany.com/project/chris-and-karen-carmody/
or call Family Missions Company at
(337) 893 - 6111.
Thank you and may God bless you and all those
you hold dear to your heart!
Labels: Costa Rica family Karen