A Delightful Detour by Karen 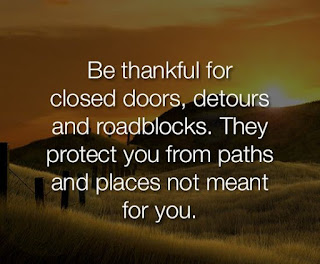 When change is gradual, it can be difficult to detect.  For this reason, I feel especially thankful for the opportunities that the Lord gives us to see the progress that we've made in this journey of faith.
Recently, Chris and I had an early-morning appointment in the capital city of San José, which is several hours from our house.  We left long before the birds began to sing, not wanting to waylay the process of securing our religious visas by arriving late.  Thankfully our travels were uneventful and we got there in plenty of time to do that which we had not planned for: drive across town in rush-hour traffic to a different office, buy stamps and forms that we didn't realize were required, and then wait in a line outside of the building until they were ready to escort us to the official waiting area inside the building.  After our appointment ended we had to go to another government office in an unfamiliar part of town.  When it was finally time to leave we plugged "Santa Rosa de Pocosol" into Google Maps to find the best route home.  As soon as the little blue line appeared we began following it mindlessly as we chatted about what else had to get done for the religious visa process.  Chris turned left when the blue line went left, and right when it told us to go right.  About a half hour into our trip we found ourselves confused because we were being told to go down a road that didn't seem to exist.  We traveled a bit further and then turned around to search in the other direction.  We could see a road on the other side of a swampy depression that resembled the route we were looking for, but how could we get there?  As we were searching we came upon a billboard that announced the grand opening of a highway that connects San José to Cuidad Quesada, the large city about an hour south of our town.  "I think that's what we're looking for," I remember saying to Chris.  He doubled back a few more times and finally found a gravel entrance to a road that seemed closed.  (I wish I would have taken a picture, but of course, I wasn't thinking about anything other than getting home.)  Unsure of what to do, Chris pulled over and consulted Google Maps once again. There was an alternative route that would have taken "48 minutes longer" but we agreed that it seemed foolish to add another hour onto an already long trip through the mountains if it wasn't absolutely necessary.  Just then, a black truck barrelled past us and disappeared down the "closed" road.  Chris and I smiled and exchanged glances that said, "If he can do it, so can we." 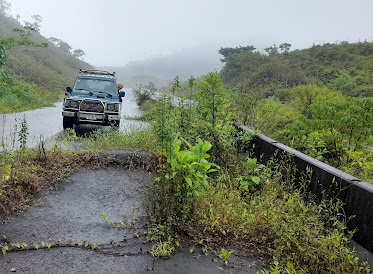 At first, we couldn't understand why there weren't other cars using this shortcut.  It seemed like the only things missing were painted lines and mile markers.  Then we rounded a curve and happened upon a minor problem.  There were plants growing in the middle of the road, and the asphalt was bulging up from what seemed like a natural disturbance of sorts - perhaps a mild earthquake or landslide.   It's hard to tell from the picture that I took, but the road dropped down drastically.  We assessed the situation and decided that it was safe enough to continue.... after all, the only other option was to turn around and take the alternative route which now seemed way, way out of the way!

After rounding a few more curves the asphalt ended.  The good news is that the preliminary work of clearing the jungle away in anticipation of the construction had been completed so we could see where we were supposed to go.  The bad news is that it was nothing but super slippery mud.... which wouldn't have been a big deal except that there were often steep drop-offs on either side of the pathway. 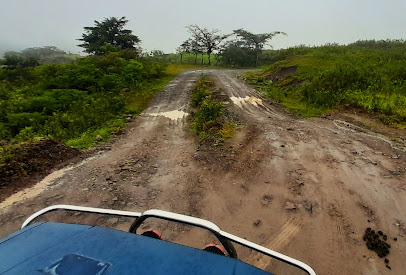 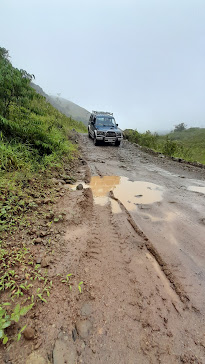 We continued along for quite some time wondering what we'd find around each bend. Interestingly enough, there were seemingly random stretches of completed asphalt highway, followed by stretches that were albeit impossible to follow. 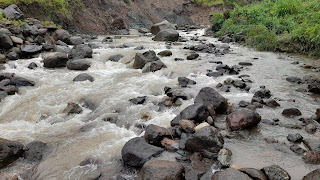 At one point we found ourselves at the top of a very, very steep descent that had a sharp curve at the bottom.  On the other side of the curve were some pretty rough waters - as you can see in this picture.

Just as we were discussing whether or not it was time to turn around, a man came up behind us on a motorcycle who had been following the same little blue line as us.  When he saw the intimidating slope he laughed, asked us for prayers, and then assured us that he'd wait at the bottom to make sure we made it safely.  Chris watched his every move as to figure out the best way to navigate this challenge.  About halfway down it occurred to me to take a video, which I assumed would tell it all.  However, in watching the video I realize that the steepness of the slope was lost.  I think it's because I took it from inside the vehicle and I was pointing it at the ground, which gives the illusion that it was all pretty flat... which was definitely NOT the case!! Anyhow, I decided to include it just to give you a sense of where we were.

Here's a picture of the makeshift bridge that was nothing more than a thin layer of cement poured over some culvert pipes.  Before crossing, we made sure that the windows were open and the doors unlocked just in case the bridge gave way and we needed to bail. 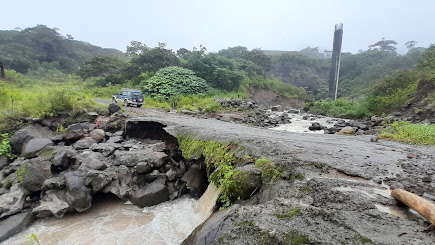 In the background, you can see a tall support column for the highway that was supposed to span this valley.  To the right of the column, you can see the slope of the terrain.  That's the same angle of the path we traveled down to get to the riverbank.

Following are some pictures of parts and pieces of the bridge that were constructed several years ago.  The project was never finished, and it seems that it never will be. 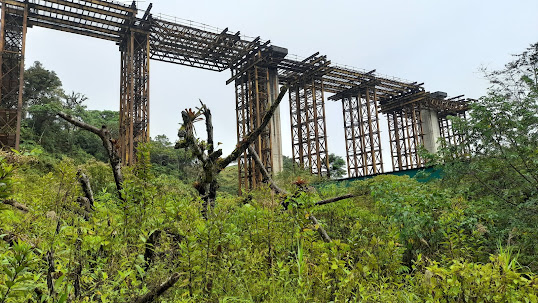 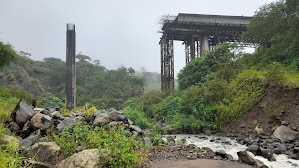 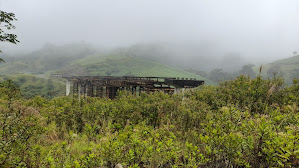 As we continued on through the jungle following what could have been a real shortcut between the capital city of San José and the largest town in our province of Alajuela, it occurred to us that such a highway would have had grave effects on all the businesses positioned along the current route.  Just like in the Old West, clusters of small businesses popped up and eventually turned into towns with large commercial enterprises.  Those towns would definitely suffer without the income generated from the constant stream of traffic that currently passes through.  A bit further down the road, we offered a ride to two locals (so they didn't have to walk in the rain) who confirmed our suspicions by explaining the correlation between the bridge project and the changing of power brought about by political elections these last six years or so.  I recently read that the top 20% of wealthy Costa Ricans make an average monthly wage of $4,650 while those living in poor rural areas earn only $360/month.  It seems that those who would have benefited from this new highway lack the political clout needed to persuade the decision-makers to finish what was started.

Chris and I arrived home several hours later than expected eager to tell our kids all about our day: not only did we accomplish what we set out to accomplish, we had an exciting adventure, got to see the beautiful countryside, and learned a bit about how the poor have been impacted by their leaders' decisions. As we talked with our kids I realized that there wasn't even one moment that I felt frustrated following the little blue line through the jungle.  I trust the Lord more than ever and feel confident that life's detours not only allow us to experience things that we might not have otherwise experienced but also protect us from paths and places that were not meant for us at a particular moment in time.

People have asked me what I mean when I say that I can feel Jesus' presence.  Well, given the fact that He doesn't typically appear in physical form, I find myself relying on the known truths: Jesus is unity,  peacefulness, and joy; He is patience, compassion, and understanding.  He is strength and certainty.  So, when all of these things are present I know that Jesus is right there with me just waiting for me to acknowledge His presence and invite Him into the situation.

The next time you find yourself on a little detour, I encourage you to pray for the grace you need to trust the Lord completely and enjoy the unexpected opportunity you've been given to experience something that you otherwise would not have experienced.   Thank you for reading and God bless.  Love, Karen

We'd love to hear from you via email: carmodyfamilyonmissions@gmail.com
If the Holy Spirit is nudging you to support us financially so that we can continue serving those in need, visit:
https://www.familymissionscompany.com/project/chris-and-karen-carmody/
or call Family Missions Company at
(337) 893 - 6111.
Thank you and may God bless you and all those you hold dear to your heart!
Labels: bikes blessings Costa Rica Karen missionary travel