Have you ever wished you had a refrigerator stove?  Well, here is a guide on how to do it if you ever want to make one.

A while back we agreed to build an outside stove for this lady named Maria because right now she has an electric stove and their family can't afford to use it because it takes so much electricity that they can't afford to pay the electrical bill.

Maria was just making a fire in the backyard and cooking over that but her neighbors complained because the smoke was blowing into their houses.  The city has a rule that if people want to cook outside they can but they have to have a smoke stack so that the smoke goes up into the sky.  So we had to start by building a little patio-type thing and then a chimney so the smoke doesn't just get caught under the roof and stink up the place.  After we built the roof we could work on the refrigerator stove. 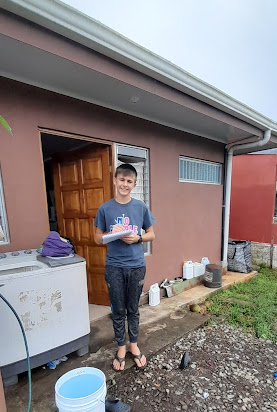 Step 1: Planning  -  First we visited maria so that we could get to know her land and talk to her about what we could do for this outside kitchen project.  My mom and I measured the backyard and started thinking about what we could build in that space.  Maria showed us the old refrigerator that she had that she said we could use to make the stove.  I didn't really understand what she was saying and I couldn't imagine that junky old refrigerator somehow turning into a stove so she told me to go to our neighbor's house because she made one out of a mini-fridge.  Here are some before pictures and also a picture of our neighbor's refrigerator stove. 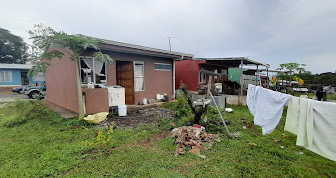 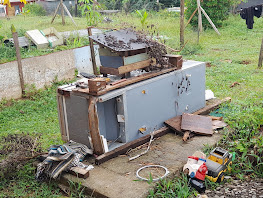 When we got home I got to sketching ideas right away so that we could hopefully finish this project fast (but then the procrastination began).

Step 2: Making a Materials List - For this step I had to look over my sketches with my mom and Maria and decide which we wanted to do.  Then we went to the hardware store to see how much everything was going to cost.  We had to improvise a little bit when we got to the hardware store because they didn't have everything exactly how we wanted it.  So now that the material list was done we could start the project.  (But we didn't because we were really busy but the good news is that we finally got it done.)

Step 3: The Start - About a month later we started.  We went to the hardware store and bought the wood and the laminas (that's what they call the big sheets of metal for the roofs here) and the cement.  We started building the patio roof thing and we were going at a good speed but THEN..... a big post fell off the top of the section we were working on and clunked Anna on the head.  At first she was bleeding a lot, but thanks be to God she didn't get hurt too badly and she just had to sit down for a bit.  Maria's kids and the neighbor kids helped us out by getting rocks from down the road that we needed to secure the posts.  Here are some pictures of us getting started. 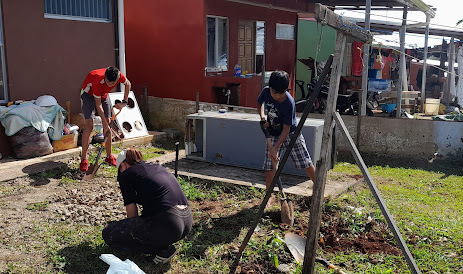 After we built the roof thing we had to make supports to keep it all in place so that it stayed where it was supposed to be when we filled all the holes with cement. 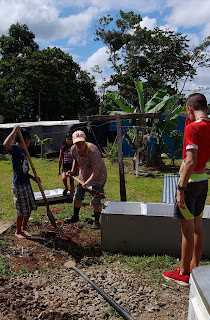 Step 4: Prep the Fridge - Me and Jack got to karate kick the doors off the fridge and then we cleaned it out and moved it to where Maria wanted it.  Then we had to fill it up.  We didn't have a lot of dirt so we collected the garbage from around the yard and put that in first so it would take up the space.  Then we put the dirt on top.  That's what the people here do.
Anna and the kids went back down the road to get dirt to fill up the fridge.  They were really excited to help. 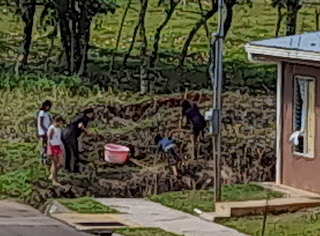 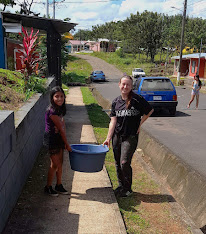 We finished the roof part in about 2 1/2 days and Maria loves it. Also we all had lodes of fun. 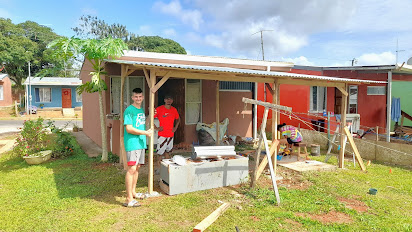 We put the metal panels on the top of the wooden frame that we built but Alvaro (Maria's husband) wanted to do it a little bit differently so he took over this part of the job.  He also wanted to make Maria her refrigerator stove so we just gave him the materials.
Maria said that she could use the top of an old stove (that is shown in the picture above), but Alvaro tried it and it didn't really work.  Today, my dad and I are going to the hardware store to buy a cast iron stove top that has two openings for the pots and there is one more opening for the chimney pipe.  The stove top will be set on top of cinder blocks.  Alvaro is really happy because this will make it so that they can finally cook outside.  He said that they'll invite us over to have chicken soup after they get it all done.  I'll update this blog with some more photos so that you can see the finished product.

Thanks for reading about my most recent engineering project.  Have a nice day, Michael

As I promised - here are a couple of pictures of the finished stove.  Alvaro said they use it every single day, which is really cool.  I think the smokestack is supposed to go up above the roof.  We gave Alvaro more smokestack pieces so that it could go up higher but he did it like this.  I guess it doesn't matter as long as his neighbors don't care.  Anyway, here are the pictures of the final product: 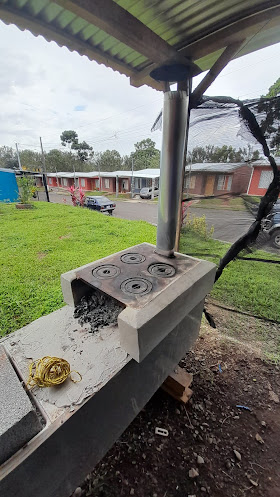 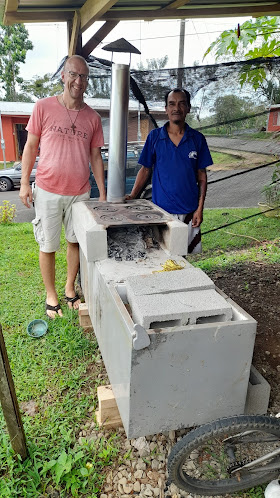